Back of the Book:

Clubs have never really been my thing. I’ve always preferred to either do things alone or tell other people what to do. Thus the life of a writer and editor has served me just fine. That said, the longest membership I’ve ever maintained in a dues-paying organization has been the Idaho Press Club.

I joined the IPC way back in 2001 and have carried one of its cards in my wallet off and on ever since. As of this writing, I am a card-carrying member in good standing, fully-paid up through January 2022. I will most certainly renew it.

Belonging to a press organization is a deceptively important act. Day to day, it’s often unclear what exactly the club does. We pay our dues every January, then pay again to submit our stories for awards consideration each spring.

When I lived in the capital city, writing and editing for the Boise Weekly, I would also attend the awards ceremony — usually held in a downtown conference space, where hacks and flacks representing most if not all of the media outlets and PR shops in the state would gather to drink too much, eat convention center food, and strut around wearing name tags while we collected our awards and gossipped (otherwise known as Idaho’s “nerd prom”).

These were fun events, but summed up pretty much the only interaction most IPC members had with the organization each year. It’s nice to get plaques and certificates honoring your reporting, but in our heart of hearts we all know they function more as a way to telegraph excellence to our peers, rather than the public. 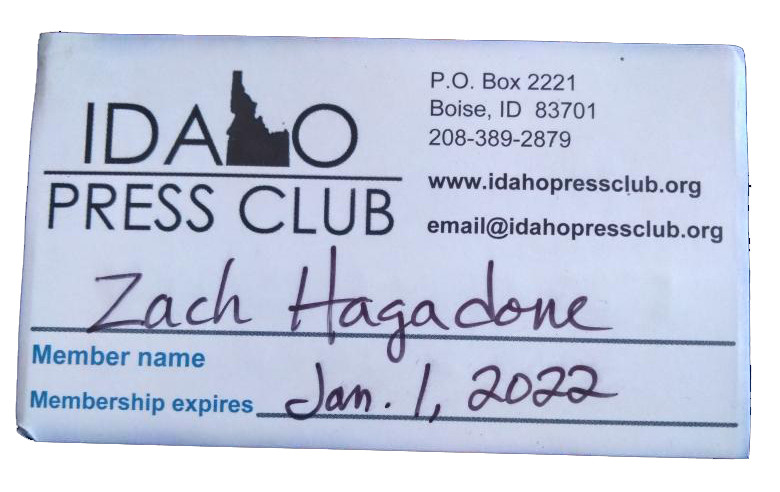 And the public hates us. According to a survey by Reuters, and reported in June by the national journalism thinktank Poynter, only 29% of news consumers in the U.S. say they “trust the news.” That’s lower than in Brazil. Also, as Poynter pointed out, among polling in 46 countries, the U.S. ranks behind Poland, the Philippines and Peru for media trust.

All this is to say that when we members of the Idaho Press Club pay our dues and shell out for our plaques, it’s with a vague sense that what we’re doing is important in so far as it advances the solidarity of our profession — the only one firmly rooted in the secular defense of the First Amendment — but we often don’t see much come of it, other than a decent party.

The past few weeks have provided powerful evidence for why it’s so important that the IPC exists, as it successfully sued Idaho Lt. Gov. Janice McGeachin — who is running for governor in the 2022 election — to release unredacted public records related to her “Task Force to Examine Indoctrination in Idaho Education,” which has convened in several sessions this year aimed at rooting out “critical race theory” and other perceived un-American curricula in Gem State schools.

So far this task force has yet to uncover any nefarious deeds; yet, journalists — almost all in the Boise area — have doggedly covered the proceedings and, empowered by federal and state constitutions, requested materials from the lieutenant governor’s office that may, or may not, support her claims.

At first she refused to comply. Then she submitted records that were so heavily redacted as to be meaningless. Then she came across with the records — all subject to the Idaho Public Records Act — but soon after launched into complaints that her non-compliance with the law had to do with the protection of individuals’ privacy, then that her office didn’t have the money to cover the records request (even as she requested taxpayer dollars to convene her task force in the first place) and, in a real truth-is-stranger-than-fiction moment, claimed that her office and lawyers couldn’t find the invoices to cover $50,000 in taxpayer money that she also requested to cover legal bills from outside counsel, Sandpoint-based lawyer Colton Boyles, of Boyles Law.

All the while, she has blamed “the media” for stoking controversy around her ad hoc inquisition. What did “the media” find in the records of communications that she so desperately wanted to protect? Most Idahoans who took the time to communicate with her office said that they think her task force is grandstanding at best, a waste of tax dollars in the short-term and totalitarian at worst.

It’s obvious why she didn’t want that information to see the light of day, which makes it all the more obvious why it should have — and how critical the role of press associations are in actually defending the First Amendment and open government on the ground.

People in the U.S. might not trust the press, but here is one of who-knows-how-many examples, both big and small, of times when reporters have gone to bat directly for the public’s right to know what their government and its officials are up to.

This is the real work of defending representative democracy — not mobs and flags and guns and mean tweets and anonymous threats. I couldn’t be prouder of the IPC for its stand against McGeachin’s unlawful obstruction of access to public information and glad for every dollar I’ve ever given the organization.

I’m not a joiner, but your press club is one whose card I’ll gladly carry.