Summer is typically tour season for traveling bands, and a handful of out-of-towners are swinging through the 219 Lounge in the days immediately before the calendar flips to fall. 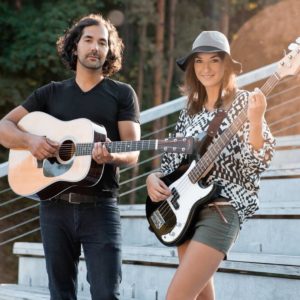 First up is Paul and Ieva Cataldo, a husband-and-wife duo who are about as “out-of-town” as you can get. Living in their Ford Explorer and Scamp trailer home while they play an average of more than 200 shows every year, Paul and Ieva hail from Massachusetts and Lithuania, respectively. Though a New Englander by birth and upbringing, Paul lived for a spell in Asheville, N.C., where he evolved an Appalachian-infused style of backwoods Americana. Today, the Cataldos are inveterate wanderers, putting on shows from Florida to Alaska and Lithuania to Portugal.

Catch Paul and Ieva on Thursday, Sept. 19 from 8 p.m.-11 p.m. In the meantime, check out their newest album Wild & Free, which dropped in 2018, on iTunes, Spotify, Pandora and Amazon. Follow the couple’s travel video travel diary Free, Wild & Restless on YouTube. For even more, go to paulcataldo.com to read Paul’s voluminous and entertaining blog, filled with musings, travelogues and the occasional righteous rant.

On Saturday, Sept. 20, Spokane-based rockers the B Radicals come to the 219, bringing their distinctive brand of psychedelia-tinged “existential experimental rock-funk,” which takes audiences “on a polyrhythmic trip through ethereal realms.”

Far from word salad, the B Radicals’ self-applied descriptors are radically apt. Songs like “Strange Travels” and “Galactic Circles” traffick in a trippy sensibility that conjures King Crimson and David Bowie crossed with the ever-expanding universe of riffs typified by spacier cuts from the Grateful Dead. Far from a mind-spiralling electro jam band, the B Radicals turn out some truly unique sounds — look no further than “Go Go Gadget Funk,” which launches listeners through a sonic wormhole of funk bordered on both sides with didgeridoo.

Be ready to get all kinds of spacey, groovy and funky at the 219 from 9 p.m.-midnight.

Finally, on Sunday, Sept. 21, the Donnie Emerson and Nancy Sophia Band comes to the 219 with its blend of pop, R&B, classic rock, funk, blues, disco, jazz and country. If that felt like a list of darn near every musical genre there is, you’d be picking up on something fundamental about the band: It can do and does a little bit of everything. A fan of KD Lane? Check. Marvin Gaye? Check. Johnny Cash? You get the picture.

Frontman Emerson is also a bit of an underground rock legend. The song “Baby,” which he wrote and recorded in the late 1970s with his brother when they were teenage farm boys in Fruitland, Wash., was rediscovered in 2012 and covered by Ariel Pink. From there, “Baby,” off the Emerson brothers’ album Dreamin’ Wild, became a sleeper hit — drawing awe-toned praise from no less than late-night talk show host Jimmy Fallon, who in response to a question in 2015 about what he’s been jamming out to, responded, “the song is so cool … it’s a great jam.”

It’s unlikely that “Baby” will make into the set list at the 219 — husband-and-wife team Emerson and Sophia’s band tends toward groovier, sax-inflected fare — but based on the enormous range of genres in their repertoire, there’ll be something for everyone.