From the stage to the airwaves

A radio play about an alien invasion seems strangely fitting for this turbulent year of 2020. The Music Conservatory of Sandpoint has partnered with KRFY 88.5 FM Panhandle Community Radio to produce two radio theater performances showcasing the talent of local students. 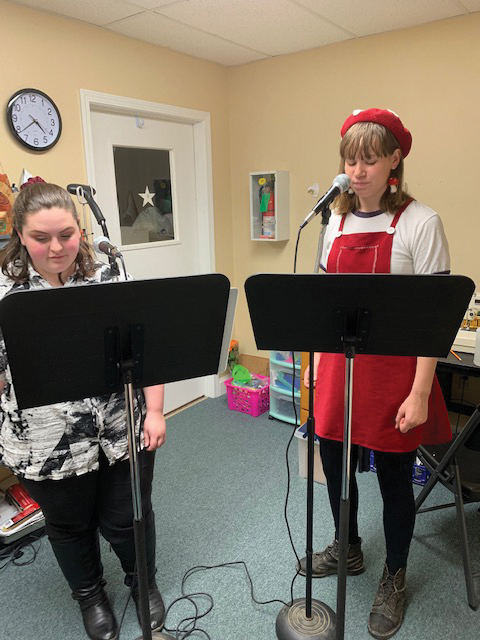 Brittany Hagen and Lucinda Meshberg rehearse The War of the Worlds for their Teen Drama performance. Courtesy photo.

As head of MCS’ Theater Department during a pandemic, Keely Gray has had her work cut out for her. Adapting to the socially distant reality of theater during COVID-19, Gray has been working with her older theater students at MCS to bring the performance off the stage and onto the airwaves.

Gray’s Teen Drama Class will perform an hour-long production of H.G. Wells’ famous radio play, The War of the Worlds on Sunday, Nov. 22 at 6 p.m. Listen to the performance free on KRFY.org or at 88.5 FM.

The challenges of theater production during COVID-19 have made it so the versatile young students had to adapt and embrace that time-honored saying, “The show must go on.”

“With COVID, we figured out it wasn’t going to be possible to do a production or a performance-based class in the traditional regard, which is what the kids have always loved doing in the past,” Gray told the Reader. “I had some audio engineering experience in college and have worked with sound effects before, so I said, ‘Hey, let’s figure this out.’”

Tapping into MCS’ close relationship with KRFY, organizers struck on the idea to perform a radio play instead of a traditional stage play.

“After some research, the first one that came to mind was H.G. Wells’ The War of the Worlds,” Gray said. “In 1938, it literally scared the crap out of the whole world. People thought it was real.”

Gray said the FCC actually developed new laws because of the 1938 broadcast, when many tuned in late and thought the play about an alien invasion was really happening.

“We thought about how apropos it is that we’re doing The War of the Worlds in 2020,” Gray said. “I mean, we’ve had everything else happen, why not an alien invasion?”

Working with smaller class sizes than usual because of COVID-19, Gray said her Teen Drama Class had to adapt to hone their skills for a radio play.

“All of them are playing more than one part,” she said. “We had to really focus on characterization and voice work where they have to shift their voices so the audience knows it’s a different character.”

But, Gray pointed out, kids are sometimes quicker at picking up theatrical nuances like these than adults. 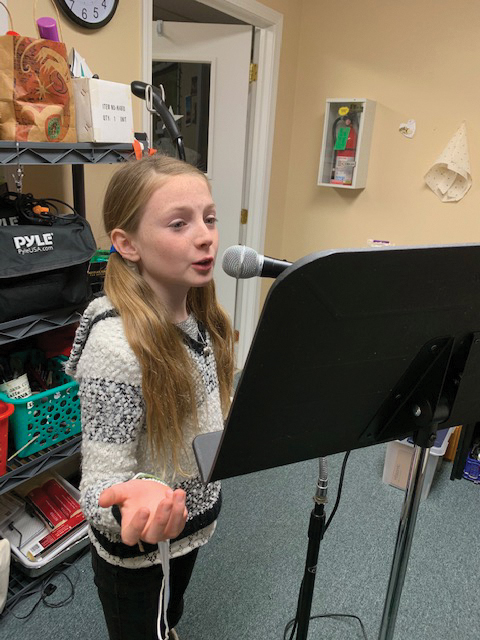 “Theater helps foster a lot of different skills for people in general, especially kids,” said Gray. “They learn socialization, responsibility, work ethic. … As adults, we actually unlearn the ways of freedom in acting. I had instructors in college who were always trying to teach us how to revert to being a child again. Children are just so free, they just don’t care, they want to go for it and have fun. They are more willing to throw caution to the wind and not worry about people judging them”

The theater classes were split by age group to keep class sizes small, so Gray’s Young Performers, ages 8-11, will perform their own radio show the following week on Sunday, Nov. 29 at 6 p.m. on KRFY.org and 88.5 FM. The Young Performers’ show will be a School News Report, with segments covering everything from a kickball stolen in kindergarten to someone getting a slice of pepperoni on their cheese pizza.

“After everything was so crazy during summer because of COVID, we cut our groups in half so students were in less-populated groups,” Gray said. “I found this School News Report for the Young Performers to do and after reading through it, I thought it was so adorable.”

The younger students will also have to perform multiple roles, but Gray let their creativity run wild in forming the character names and voices.

“I gave them full creative control for character names and backstories,” Gray said. “So we have character names like Lulu, Beyonce, Lunar. These young performers really blew me away.”

“It’s such a blessing to be their teacher because it allows me to let go of that learned behavior as an adult, too,” Gray said. “In coaching them, I’m never as much myself as I am in front of my kids.”

Catch both performances on KRFY.org or 88.5 FM and learn more about the Music Conservatory of Sandpoint at sandpointconservatory.org.