Typical Brenden: late to the party. Summer is practically over, and only now is he riding in on his science pony to warn us all of the dangers of ultraviolet radiation. 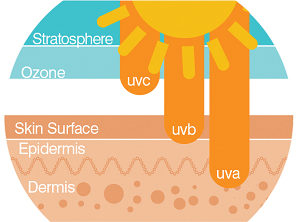 Ultraviolet radiation, or UV radiation, is a unique type of radiation, sitting somewhere between low-frequency radio waves and high-frequency X-rays and gamma radiation. It’s what makes some of us golden-brown after a tropical vacation, and also what makes people like me turn beet red and peel like I’m molting an exoskeleton. At least the library lets me escape those pesky invisible death-rays.

If you’ve ever wondered why you can’t tan, I’ve got some news for you: Your ability to tan was decided before you were even born. It’s all genetic. A sun tan is the body’s way of producing excess melanin in the top layer of your epidermis (a.k.a., your skin). Melanin is a brown pigment that helps absorb UV radiation and protect the lower levels of your skin from cancer-causing rays. Some of us produce far less melanin, which leads to faster burning. A sunburn is when your skin becomes damaged by the radiation, which causes it to redden and swell, then horrendously itch and peel as your body begins to replace the damaged cells.

UV radiation, like most mid-to-high radiation types, does damage to organic cells by a process called ionization. Ionization is what happens when something rips the electrons from individual atoms, which can cause serious damage to DNA structures in cells that leads to mutations and breakdown. We talked a little bit about this in the “Mad About Science” column of Sept. 12, when we talked about cool bacteria in Hanford and other nuclear waste repositories.

UV rays come in three distinct flavors, the first being UVA, which has the lowest energy of all UV radiation. UVA is what helps us tan, but can also cause us to get skin cancer if we spend too much time in the sun or in a tanning bed. The second type is called UVB, which has more energy and is the type of radiation that gives us sunburns. The third is called UVC, and it’s a high-energy radiation that is absorbed by ozone in the Earth’s atmosphere, so it’s something we don’t have to worry about unless we’re trying to tan on the surface of the moon — which, for the record, is not advisable as the surface of the moon can reach up to 260 degrees Fahrenheit in direct sunlight.

Since UV radiation is dangerous to organic cells, how does that affect plants? We were all taught in school that plants generate energy from the sun using chlorophyll in their leaves, which utilizes sunlight to break down carbon dioxide, to pull the carbon out and use as building blocks for the plant while spitting out oxygen as waste. Plants use photons — light particles from the sun — for this process, but UV radiation is different altogether and it has been shown by researchers that UVB radiation damages plants in the same way it damages our skin cells.

Unfortunately for the plants, they can’t slather on sunblock, so plants have adapted to exist with UVB rays and thrive despite them. Most plants are capable of regenerating damaged growth quickly, while others like trees can shield their sensitive trunks with the very leaves and needles that give them energy to grow. After 3.5 billion years of evolution and lifespans of several hundred years, plants learned some cool tricks to survive.

We’ve established that UV rays are a lethal source of power, so what good are they? Sometimes, destroying cells is a great thing for humans. We actually use artificial lights that barrage our water lines with UV radiation to kill bacteria in our drinking water that could otherwise make us sick. We also use it in sensitive laboratory settings where surfaces and tools must be meticulously sterilized. Surgeons have even used UVC radiation to sterilize an operation site to kill MRSA bacteria.

Phototherapy is another use of UV radiation, in which a patient will take a medication that’s absorbed into their skin, making the skin more sensitive to radiation to help with conditions like psoriasis. Doctors have also used UV rays to bolster peoples’ immune systems when suffering from certain blood afflictions and infections in a process called ultraviolet blood irradiation.

Xenon gas used in plasma welding also creates UV radiation. The blacklight from your favorite episodes of “CSI: Crime Scene Investigation” also utilize UV rays, which is why the investigators have to wear protective eyewear when using the lamps. Bodily fluids glow because they absorb the UV light and then re-emit light in the visible spectrum.

Now that our demisphere of the Earth is tilting away from the sun and our UV exposure declines, it can mean only one thing and the great Sean Bean said it best: Winter is coming.