The new high-tech, solar-powered trash cans that started popping up on Sandpoint city streets in mid-July have proved to be a treasure trove of public debate. A post on the Sandpoint Local Forum Facebook group featuring a photo of one of the trash cans at City Beach overflowing and surrounded with garbage netted more than 220 responses from July 30-31 alone. 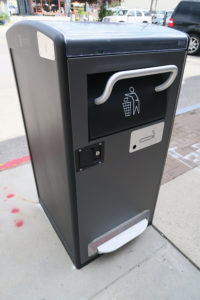 One of the new trash bins located around Sandpoint. Photo by Ben Olson.

Other critics take aim at the price tag of $4,000 for each of the “smart” bins from Massachusetts-based company Bigbelly, which come equipped with Wi-Fi and transmitters to alert city officials and Sandpoint trash disposal contractor Waste Management when the receptacles need emptying.

Many of the 56 units, specifically those installed around downtown and in city parks, feature solar-powered internal compaction systems that enable them to hold 150 gallons of refuse — five times more than the old trash cans, according to the city. Some sport a purpose-built disposal area for cigarette butts and all operate via front-loading handle- or pedal-operated hatches called hoppers.

“We had been on this trend as a city when we’ve been consistently adding more and more garbage cans,” she said. “We had exceeded the number of cans that [Waste Management] will pick up under the terms of the contract.”

All those extra cans added up to mounting expenses. With 155 of the old cans and counting — each of which cost $1,200 — Waste Management was billing the city $20,000 per year above the contracted amount to perform collections. On top of that, city staff had to take on the task of trash disposal in the parks. According to Stapleton, if the city had continued on that path, excess disposal costs would likely have risen to $30,000-plus per year.

Because the new bins can handle more trash and ping managers when they reach 80% capacity, Stapleton said the number of trips Waste Management has to make will be immediately reduced — eliminating that $20,000 per year overage from the start. Furthermore, Waste Management will now collect from the parks, thus freeing city staff from trash duty.

“A lot of it is in avoided cost,” Stapleton added. “Really when we look at it we believe we have cost savings as a result of going with this. … This allows us to modify the service based on what the current demand is.”

As for the pictures of overloaded Bigbelly bins making the rounds on social media, Stapleton said that has everything to do with people trying to cram in things that aren’t meant to go into a municipal garbage can, thus jamming the hoppers. During the weekend of July 26-27, she said only one can reached 80% capacity while city staff had to respond to five jammed hoppers. As for the City Beach bins, during a conversation on July 31, she said that none of the units at the park were reported full. They had simply been jammed with inappropriately large items.

“There’s an appearance that the garbage can is full, but people are shoving things in there that are not meant to be put in municipal bins,” she said. “It’s not a problem with the bins, it’s a problem with what we think we should be able to shove into the bins.”