Mad About Science: The Dodo

The dodo was a bird closely related to pigeons and doves, though you wouldn’t think it if you ever saw one. They were about three feet tall, fat and flightless. An evolutionary history on islands with no predators probably helped establish its … aherm, portly appearance. 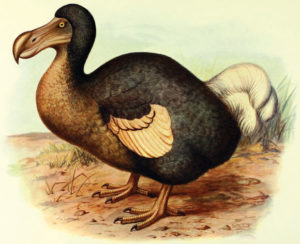 Flight is an important ability for birds. It makes them travel faster, escape predators and intercept prey more readily, but who needs to burn all of their energy on flying when most of your food falls on the ground? If I were stranded on an island where tacos fell out of the trees, I’d probably look ready to engage in a sumo throwdown, too.

While you might expect an extinction shaming and a climate lecture, climate change as we know it had very little to do with the dodo extinction. It was a rare bird by nature, living on a relatively isolated island in the tropics with few natural predators. As humans moved in around the 1600s, bringing pigs and other large mammals, the dodo had a hard time competing with more efficient animals. Unfortunately, its extinction was an inevitability even if it had survived into our conservationist 21st century. Now I’m not saying light a tire on fire and throw a garbage bag full of six-pack rings in the ocean, but evolution has proven that some species will thrive and others will die.

It’s just like that song in “The Lion King”, if it were rated R and Mufasa decided to feast on Rafiki’s bones for holding his cub over a freaking cliff.

As science wasn’t exactly in its peak in the 1600s, not much remains of the dodo. Preservation wasn’t as careful then as it is now, and scientists at the time didn’t have things like climate controlled clean rooms. The few fossils that remain are primitively preserved heads and feet, a couple of leg bones and plaster skeletons that are recreations of recreations. Interestingly enough, drawings are the best-preserved remnants of the dodo. You know, stuff scribbled on frail parchment that survived for 400 years.

In recent years, scientists have used a wide range of scanning techniques like MRIs (magnetic resonance imagery) and CT scans (computed tomography) to scan the inside of the few dodo skulls still floating around. From there, they cross-reference the interior of the skull with the interior of skulls from other birds to deduce what parts of the brain dodos used the most. They found their brains were most similar to pigeons, with a developed olfactory bulb. That means they had a great sense of smell, which likely meant a great deal of their diet were fragrant things like fruits. Being a bird, it likely ate whatever it could fit into its beak, including rocks: Most birds do this using an organ called a gizzard.

We also know a bit about the dodo’s reproductive abilities. Typical of an extinct animal, it wasn’t particularly effective when comparing it to something like a mouse that can foster several babies per litter up to 10 times per year. The dodo laid a single egg and raised a single offspring, presumably to adulthood. Whether or not it had any more after that one is totally unknown, but that means it took two dodos to make one dodo, which could effectively halve the population every time the parents died. That likely wasn’t the case, but… We can’t really know for sure. Most birds will lay several eggs to mitigate high mortality rates. The dodo was probably just unfortunate enough to be stuck between: “I’m a small bird with hyperactive oviducts” and “I’m a big bird that needs to eat a lot to make new birds.”

Despite the species’ fragility, we do know that it was particularly hardy when being transported, as for some time the dodo was transported by humans from its habitat to exhibits around the world. Equipped with a beak that could easily crack hard nuts and shear through the soft skin of fruits, dodos were fed all sorts of things on sea voyages during their transports. Whether or not these transports stressed the dodos too much to breed, or humans just didn’t allow them to breed,we may never know. A lot about the dodo is a big question mark.

The dodo is, if nothing else, a rallying cry for animals facing extinction today. The fact that we know so little about something that died out so recently is pretty depressing, and if it’s in our power to stop another animal from facing the dodo’s fate because of something humans are doing, we should do whatever we can to preserve and foster it, and if it’s too late, we should at least learn everything we can about it to prevent that from happening to its closest relatives.

If you want a fun lens for extinction, (Never thought I’d say that) I would suggest checking out some of Ralph Steadman’s books, including “Nextinction”, or “Extinct Boids” that showcases the mysterious dodo with quirky art and facts. You don’t even need to buy them, just check the library’s online catalog and click “Place Hold”.