By Brenden Bobby
Reader Contributor
Brought to you by Sandpoint Library

Fish! Everyone loves fish, whether it’s between a pair of chopsticks downtown or flitting about your custom 272 gallon aquarium. Fish are magnificently primordial creatures, with some virtually untouched by tens or even hundreds of millions of years. Not all of them taste great, some are actually poisonous. Ever heard of Fugu? It’s a Japanese delicacy, but if it’s cut improperly you’ll be sleepin’ with the fishes!

Here in Mad About Science, we like to do it big. When you think about big fish, you probably think about sharks. Man, they’re ugly. The larger Great Whites reach to be about 20 feet long, about half the size of a school bus. What about his ancestors? Prepare to be horrified! The Megalodon lived as recently as 2.6 million years ago, and was estimated to stretch up to 75 feet long. A Mini Cooper could drive into its mouth and back out after realizing what a stupid idea it would be to drive into a shark’s mouth. 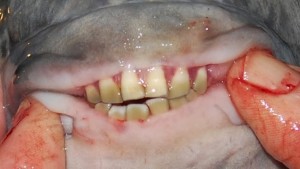 And the creepiest fish award goes to… the pacu fish!

Giant prehistoric torpedos with jaws full of serrated teeth the size of my whole hand are cool, what else do ya’ got?

I’m so glad you asked.

Meet the Coelacanth. He looks like some ugly thing you’d find in a pond, other than his weird name, nothing special about him, right?

Wrong. The Coelacanth (Pronounced See-la-kanth) is a glimpse of a world before even the dinosaurs, what you would call a living fossil. It is more closely related to the first animals to flail about the ocean depths than most other creatures alive today. The ability to see something that has remained virtually unchanged for tens of millions of years gives us a unique perspective on how life on Earth has evolved to the state that is.

That’s nice, but not nearly as cool as a giant shark.

Fair enough, let me introduce you to the Piranha family. You’ve probably heard of them before: schools of these savage fish turning a grown man into a skeleton in a matter of seconds. That’s them, but to be fair, they’ve gotten a bad rap and should really consider hiring a new PR manager. Piranha are largely scavengers, like the vultures of the Amazon river. When dead things fall in, they clean it up. They may get a few lucky chunks out of a living creature, but unless it’s profusely bleeding and on the verge of death, they don’t seem to want to risk the effort of tearing it apart. Dead things don’t fight back.

Piranha make for popular aquarium pets as well, as strange as it sounds, since they integrate well with Oscars and other South American Cichlids. They’re a joy to watch if you toss a piece of bloody steak in the water with them, especially if you own a small school of them; but be warned, they can grow up to 11 inches under certain conditions. This is considerably smaller than their prehistoric ancestor, the Megapiranha, that could grow up to 3 feet long, but a lot larger than you can fit into a goldfish bowl.

Some people have made the mistake of not realizing how large these fish grow, and have figured the humane option is to set them loose in their local pond or river. This is a terrible idea, and it plays an incredibly detrimental effect on the local ecosystem that can end up causing in upwards of tens of millions of dollars (or more) in damage when local authorities try to quell the surging population of invasive fish. This case is made clearer by no other fish than the Pacu, a cousin to the Piranha. Indigenous to the Amazon river.

Pacus look like Piranha with human teeth. It’s just as weird as it sounds. Over the course of decades, people bought Pacus for their aquariums, thinking a school of two inch darting Piranha lookalikes were cute additions to their tank. After a few years, those itty bitty guys ballooned up to between 15 and 30 inches long and have either eaten or outcompeted everything else in the tank.

The Pacus presented a problem identical to the one posed by Boa constrictors in Florida. What do I do with them, now? Many people thought taking them to their local river was a humane farewell to their old friend. Unfortunately, it wasn’t so humane for the rest of the ecosystems around the world that would be impacted by this invasive fish. Pacus have been fished up from multiple rivers throughout Europe and North America. Several states in the Midwest are currently combating a problem of Pacu domination that are destroying native fish and flora species en masse.

On the plus side, they are edible, and considered a delicacy through most of the Amazon basin, so if they problem gets even bigger, enterprising entrepreneurs may have a future in Pacu-themed restaurants!