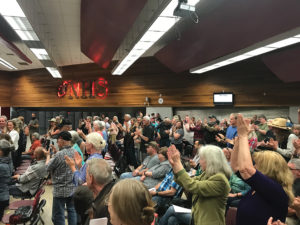 Members of the audience applaud a speaker’s point at a May 22 meeting at Newport High School. Courtesy photo.

The group had attempted to overturn an earlier decision eliminating the “Public Lands” zone classification from county code and replacing it with “Public/Institutional Uses.” The rezone — proposed in the form of the zoning code amendment — broadened the uses allowed on those lands.

“We look at ourselves as patient landowners in the area waiting for some of the local issues to be resolved,” PacWest President Jason Tymko told The Spokesman-Review. “For us, the largest [issue] is the zoning.”

Anti-smelter groups are optimistic that more can be done to stop PacWest.

“While we are disappointed with the county’s decision, we remain committed to taking whatever action is necessary to ensure that the county follows the law and that the smelter is not built in our community,” RG*NEW co-chair Phyllis Kardos told the Spokesman.

The rezone prompted a contentious public hearing May 22 at Newport High School, which drew about 200 attendees as county commissioners reconsidered the local planning and zoning commission’s rejection of the planning amendment, which stated “there is no mechanism … to allow for rezoning upon the transfer of the [public] property to a private entity,” adding that properties sold by a public entity to a private one “are heavily restricted when it comes to allowable uses.”

Representatives from RG*NEW and Citizens Against the Newport Silicon Smelter came out in force to the May hearing, alleging the code amendment would pave the way for the smelter because more uses would be allowed on PacWest’s land, which was previously zoned “Public Lands.”

Other community members vouched for the amendment, encouraging commissioners to approve it in order to generate more tax revenue from new developments. Several others said they bought property zoned as “Public Lands” anticipating that a rezone would happen and allow them to build homes.

County commissioners maintained that the rezone had nothing to do with the smelter, as several other properties would also be impacted by the change.