An early bout of winter weather on Sept. 28-29 dumped snow in the mountains and caused thousands of power outages in the Inland Northwest. 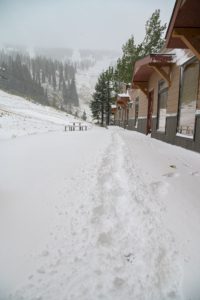 “The storm hit our Sandpoint service territory first — and with the most significant impact,” Vollen wrote to the Reader.

Power in the region had been restored to nearly all customers by approximately 8:15 p.m. Sunday, Sept. 29, Vollen wrote.

Northern Lights Assistant General Manager Jeff Van Stone said there were 2,000 outages “at the most,” located in Sandpoint, Sagle, Priest Lake and some into Montana.

“I’d say Sandpoint and Sagle got hit the hardest,” Van Stone said. “Our guys worked around the clock and had everyone back on by Sunday.”

According to the National Weather Service, temperatures recorded Sept. 29 were about 40 degrees lower than average for this time of year. Snow is not unheard of in September, but fairly uncommon in this area, the agency stated.

The winter storm broke heavily on Great Falls, Mont., where up to four feet of snow fell in the mountains and prompted a Sept. 28 winter storm emergency declaration from Montana Gov. Steve Bullock. It was the second-highest two-day snow total on record for Great Falls, surpassing a record set in 1937.

The snowfall was quite a bit less in Bonner and Boundary counties, with Schweitzer Mountain reporting “several inches” falling in the village.

The Inland Northwest Weather Blog reported that “only a few cases since 1900 have set up like this one so early in the season. This pattern during the winter months is common, but late September is not.”

“We started with our first call of an outage at 5:30 in the morning [Sept. 29] on Talache Road, which quickly escalated from one guy out to four guys out, to eight guys out,” Klatt said. “At times we had trees and power lines down across Mountain View Road, Baldy Road, Lakeshore Drive, Bottle Bay Road, Garfield Bay, Sagle in two or three spots. Other than that it was pretty calm.”

Klatt said the area south of the Long Bridge bore the brunt of the storm, with road closures and power outages affecting residents until Sunday in some cases.

“We had EMS, sheriff’s [officials], the fire department, the city all reporting,” Klatt said. “It was quite a storm. Even I had to come in and grab my work rig and put a chainsaw in my hand up on Baldy for a while to chip in a little and show the guys that even an old man can run a chainsaw.”