Members of a local Christmas tree association are concerned after finding several trees marked with ribbon that are part of an active research project at the University of Idaho extension campus.

Tom Leege of the Inland Empire Christmas Tree Association was notified by one of his group’s members that four or five corkbar fir trees that are part of an ongoing seed orchard project were marked with purple ribbon indicating that they might be marked for cutting or transplanting. 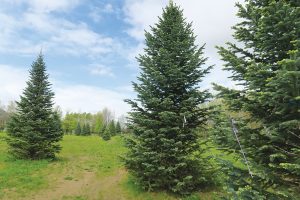 A handful of corkbar fir trees were marked by an unknown person on the University of Idaho extension campus. Photo by Ben Olson.

“I couldn’t understand why they’d be marked like that, but I know we didn’t do it,” said Leege. “It’s worrisome this time of year because, in the past, someone has come onto that property with a big mechanical spade to dig out trees and move them somewhere.”

Leege was concerned the same individual might be back again marking trees to remove unlawfully.

The trees in question are four or five corkbar fir, otherwise known as blue alpine fir trees, which were roped off with purple flagging tape.

The 30 or so corkbar fir trees remaining on the University of Idaho extension campus are the remnants of a research project initiated in 1998 by Dr. Dan Barney at U of I to evaluate 16 different seed sources to determine which ones were best suited to growing conditions in North Idaho. Six sources of corkbar fir seed and 10 sources of subalpine fir seed came from national forests in the southwestern U.S. All the seeds were grown at the indoor U of I Forest Research Nursery for two years, then they were transplanted to the Sandpoint Station on N. Boyer Ave.

In 2001, the most vigorous seedings—360 corkbark and 600 subalpine fir—were planted at the Sandpoint Station to compare the seed sources for growth, vigor, shape, disease resistance and other desired attributes for nursery stock and Christmas trees.

When the study concluded in 2010, all but 30 of the original trees were harvested to be sold as Christmas trees. The 30 remaining trees will be used in future years as seed producers.

“The best of the trees were left to establish a seed orchard for the future,” said Leege.

“These grand firs have been producing seed for us for the last 10 years now,” said Leege. “The seed orchard is just coming into its prime now at 40 years of age. It’s a real asset to us to have that orchard, which is located about 100 yards from where we have the seed orchard for the corkbark fir.”

Leege said the corkbark fir trees will hopefully begin producing seed in the next 5-10 years as long as nothing happens to the trees, which is why he and his association are concerned that they have been marked for apparent removal by an unauthorized person.

“This is an active research project, there are signs there and everything,” said Leege. “They are the best of the crop from the beginning, so we’d hate to lose any of them for our future seed supply. These 30 seed trees are beautifully shaped and appear to be superior Christmas trees with very little shearing, so it is likely that their offspring will be well worth waiting for.”

The corkbark fir seed orchard is near the grand fir seed orchard that was established by the Inland Empire Christmas Tree Association and U of I in 1982. Three cone collections have been made from this orchard, the latest being in 2016. While grand fir don’t transplant very well, the corkbark fir transplant very well, and are sought for both Christmas tree usage as well as ornamental usage.

Leege said if anyone witnesses an individual cutting down any trees at the property on N. Boyer for them to contact him at [email protected]