The far side of three long-delayed, back-to-back international trips feels indescribable. Some long days were filled with uncertainty in these past two years. It seemed no one would ever travel again, the obstacles being far too impossible. The weight of a world without travel was dark and daunting; the load at times was almost too heavy to carry.

Then, borders slowly started reopening, and I was able to put travel plans back into action; but, truthfully, it was half hearted. I fully expected my efforts to fail me yet again. But, finally, the world of travel happened, and the green grass of Ireland was firmly under our happy, wandering feet.

What are the perks of escorting two groups of ladies around the very same itinerary a week apart? First, it gave me a chance to make purchases I’d hesitated about the prior week and, more importantly, I returned to restaurants to savor favorite foods I’d relished the week prior.

It was not an easy task, but after myriad bowls of traditional Irish seafood chowder, I feel well qualified to announce that I found the best, blue ribbon-worthy seafood chowder in all of Ireland. Not at the renowned Ballymaloe Manor or one of the many Michelin-starred restaurants of Ireland, but at the Royal Spa Hotel in Lisdoonvarna. It’s a small, unpretentious hotel right across the street from the infamous Matchmaker Bar.

The traditional Matchmaking Festival, well over 150 years old, takes place in this small spa town every September. Thousands of romantic (and hopeful) souls from all over the world gather for music, dancing and the traditional craic — that is, “good fun and conversation.”

After a wind-chilling visit to the idyllic Cliffs of Moher, our driver Luke suggested a quick lunch stop in Lisdoonvarna. My first visit there was more than a dozen years ago, and I was all in for a trip down memory lane (even though we were a few months too early to score a potential date or two, arranged by the village matchmaker).

Luke drove our mini-coach through the village to point out a handful of pubs and eateries. I stayed at the Royal on my last visit, so it seemed logical to return for a light lunch, and I chose the seafood chowder and brown bread. The chowder broth was rich and creamy, with a faint aroma of the fresh Irish sea. It was filled with mussels, clams and prawns, and firm chunks of hake and salmon.

Seafood chowder used to be considered “poor man’s food,” and many a fisherman’s wife used the leftover bits and pieces of fish — along with fresh cream and homegrown root vegetables — to season the broth. As a result, seafood chowder is an Irish menu staple. Home cooks and professional chefs take enormous pride in preparing their chowder, often touting a secret ingredient that makes theirs the best.

An annual “best chowder in Ireland” competition takes place each year in the seaside fishing village of Kinsale, County Cork. It started many years ago as a single-day event and became so popular it’s now grown to a major, four-day event where Irish chefs vie for the title of the best chowder in all of Ireland.

Though recipes vary by ingredients and technique, most Irish chefs agree that good chowder starts with fresh cream and wine. Fish and seafood ingredients can vary based on “catches of the day.” Most chowders also include vegetable components that are either cooked and pureed or diced into a fine mirepoix (lightly cooked onions, celery and carrots). The broth is prepared first and cooked low and slow until the flavors develop. The seafood is cooked separately and added at the last minute along with the broth from the shellfish.

Rich and creamy Irish butter, slathered over traditional brown bread and served alongside the chowder, can be enjoyed anytime from lunch to supper and makes for a sublime meal.

Memories of my favorite bowl of chowder continue to dance in my head and leave me with one thought: I need a fisherman in my life (or perhaps another trip to Ireland). Meanwhile, I (and you) can count on some great ingredients from Flying Fish Company and Thunder’s Catch. Sláinte! 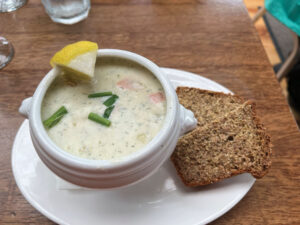 • 1 tbsp fresh minced dill (save a bit for garnish)

• Salt and pepper to taste

Shell the prawns, dry them, and set aside.

Chop the potatoes into fine cubes and finely dice the onion, carrot and celery. Place all four ingredients together in a saucepan, fry them in some butter on medium heat for about 2 minutes, then cover with the stock and bring to a simmer for about 10 minutes, or until potatoes are soft.

Put the fish in a pan and add the milk. Bring to a simmer and cook on low heat for 10 minutes until the fish is cooked. Strain the milk into a deep bowl, put the fish aside and keep warm.

Place the mussels and clams in a large (preheated) hot frypan and add ½ cup white wine; cover, shake a few times and simmer until the shells open (discard any that don’t open).

Add the strained milk to the potatoes, onions and celery, and bring to a simmer. Then add the cream and stir well. Add parsley and dill (if you wish to puree, now is the time, with an emulsifier stick).

Make a paste with 1 tbsp of butter and 1 tbsp of flour, and add to the simmering mixture. Stir until it starts to thicken. Taste the sauce and season with salt and pepper to taste.

Add the fish, prawns and crab meat to the soup. Add the mussels and clams in their broth (and shells), and ladle them into bowls. Garnish with a sprinkle of dill and a wedge of lemon.