A state court ordered Bonner County to pay $752,907.82 in legal fees to SilverWing last week, another setback in its longstanding legal dispute with the company.

The award follows SilverWing’s victory in court last November, when a jury awarded the company $250,000. The source of the dispute dates back almost a decade, when SilverWing, a planned fly-in residential development near Sandpoint Airport, alleged that the county backed out of a through-the-fence agreement. 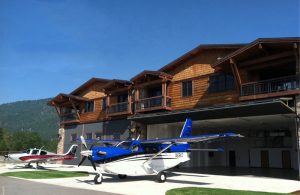 An example of a SilverWing proposed unit. Courtesy photo.

“We are pleased with the results of this award as well as the previous jury award in this trial,” said Michael Mileski, a developer in the SilverWing project. “SilverWing remains optimistic that we can work with the airport sponsor to complete our project as already approved by the governing municipalities and previously supported by Bonner County representatives.”

While Bonner County won a judgment early last year granting $750,000 in legal fees, the dispute with SilverWing has proven an expensive one. According to a public records request filed in February, the county had spent a minimum of $3,775,682 in legal fees and other expenditures related to the case as of Feb. 10.

The Bonner County Board of Commissioners did not respond by press time to an emailed request for comment. We’ll update this story should we receive one.