Earlier this month, an alliance of environmental groups challenged the Montana Department of Natural Resources and Conservation’s proposed decision to issue a water permit to Hecla Mining Company, who hopes to build a copper and silver mine outside of Noxon, Mont.

The coalition, which includes Clark Fork Coalition, Rock Creek Alliance, Earthworks and the Montana Environmental Information Center, alleges that the Hecla Mining Company’s proposed Rock Creek Mine would significantly dewater streams within the Cabinet Mountains Wilderness and have an adverse affect on bull trout populations. Earthjustice, a nonprofit environmental law firm, has been tapped to represent the coalition. 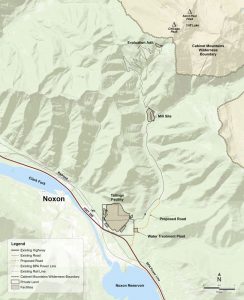 In this map, the proposed tailings facility and mill site can be seen. Map courtesy of Hecla Mining Co.

“What Hecla is asking for is the right to use water that is going to drain into the Rock Creek mining void,” said Katherine O’Brien, attorney for Earthjustice. “Streams will be dewatered permanently—streams that are in largely pristine federally protected wilderness area that support bull trout, which are a threatened species.”

O’Brien alleges that as Hecla excavates the mine adit, or entrance, they will create a void underground that will disrupt ground water and cold stream water will flood into the void.

But Luke Russell, Hecla’s vice president of external affairs, claims there will be no dewatering of streams: “The state determined there is ample water, and the use of the requested 500-plus gallons of water per minute would not adversely impact the area.”

“Both the east fork of the Bull River and Rock Creek are the two most important bull trout recovery streams in the lower Clark Fork watershed,” said Gestring. “A lot of investment has gone into recovering bull trout. We see it as really detrimental to recovery efforts.”

The coalition also claims the picturesque Cliff Lake has a potential to be emptied if a mining void empties the groundwater near it, but Russell contends there will be an offset zone 1,000 feet directly below Cliff Lake to further ensure protection of the surface lakes and water bodies.

Along with dewatering claim, the group also asserts that Hecla’s request for a water permit is premature.

Russell countered that “the state has issued a mining expiration for Rock Creek and the Forest Service is updating an Environmental Impact Statement issued in 2001. This is a supplemental impact statement.”

The coalition is also concerned that the cumulative effects of the proposed Rock Creek Mine coupled with the proposed Montanore Mine near Libby—both operating underneath the Cabinets–will be devastating for the area.

“When Congress designated the Cabinet Mountains Wilderness in 1964, it was to protect not only the land, but the vast number of stunning alpine lakes and streams that can be found within its borders,” said Mary Costello of the Rock Creek Alliance. “To give our precious alpine waters to a mining company would be a travesty.”

The history of the proposed Rock Creek Mine stretches back three decades, when ASARCO, LLC first proposed building the mine in the 1980s. The proposed mine was sold to Sterling Mine Company, then to Revett Mining Company in the early 2000s. Revett also owns and operates the Troy Mine. Hecla Mining Company acquired Revett in 2015 and has vowed to push the Rock Creek permitting forward.

“The resource has over 100 million tons of mineralized material,” said Russell. “The estimate is that there is two ounces per ton of silver and .75 percent per ton of copper.”

Hecla claims, if approvals are given, a three-year evaluation phase would explore the extent of what ore deposits are located underground. If approvals move to construction, Russell claims there would be a three-year construction period and more than 30 years of mine operations.

“The assessment phase will bring about 100 direct and indirect jobs during that phase,” said Russell. “There might be 600 jobs during construction, and 300 jobs over the 30-year mining. Plus, there will be $175 million paid in taxes over the life of the mine for northwestern Montana, plus goods and services in northern Idaho and western Montana.”

The biggest threat for folks in Sandpoint is the potential that Lake Pend Oreille, located 25 miles downstream of the proposed mining site, could become polluted by mining tailings.

Hecla estimates that during full production, 400 gallons per minute would be treated and released into the Clark Fork River.

Russell argues that both silver and copper are fundamental to our way of life.

“The things we use; cell phones, laptops, solar and wind energy … wind turbines have five tons of copper,” said Russell. “As we continue to look at alternative energy and gadgets, they depend on silver and copper.”

For O’Brien and the rest of the coalition, the promise of jobs and ore deposits are not enticing enough to risk the possible dewatering of streams and pollution of Clark Fork River and Lake Pend Oreille.

“The project still has the same problems it did when the first mining company tried to develop,” said Gestring. “These problems haven’t gone away.”

“This long fight over the legality and wisdom of mining within the Cabinet Mountains Wilderness is coming to a head,” said O’Brien. “State law is very clear that these wilderness streams should not be degraded. In our view, this project has run into a wall, and based on the evidence at this time, I don’t see any way around that.”