Turf vs. grass: the debate for the playing surface at Memorial Field

A debate over whether to use natural or artificial turf in the Memorial Field renovation project is forcing people to question the park’s place in the community.

For those emphasizing the park’s athletic uses, artificial turf is the preferred option for its resilience and its year-round usability. But for neighbors and event organizations like the Festival at Sandpoint, natural grass is favored for its aesthetic value and comfort. The debate over turf options is expected to be the centerpiece of Memorial Field workshop set for 5:30 p.m. today—Thursday, May 11—at Sandpoint City Hall. 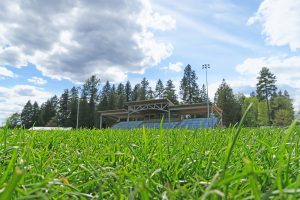 The new grandstands are taking shape from the grass level. Photo by Ben Olson.

According to Tom Sherry of SPVV Landscape Architects, there are three turf options on the table for Memorial Field: artificial turf, natural turf or a hybrid option, where the infield and dirt areas of the baseball field would use artificial landscaping while the rest of the field would be natural.

One thing is clear in the debate: Memorial Field needs a new approach. According to Sherry, the existing field is based in heavy, dark soil that does not drain water well, which often leads to soggy conditions that are either unplayable or prone to damage. It only allows for between 750 to 1,000 hours of annual playtime, even though much higher demand exists for the field.

“I don’t have a dog in this fight,” Sherry said. “Either one of these options is going to be way better than what you have now.”

The natural turf option replaces the heavy soil, instead using a sand matrix that drains much more quickly. That, at a minimum, doubles the effective amount of play hours on the field while still maintaining the look and feel of natural grass. The option is less expensive than artificial turf up front at about $1 million in total, but it requires regular maintenance and more complex draining to keep fertilizer from affecting water quality.

The Festival at Sandpoint vastly prefers the natural grass option to ensure the event continues to take place at Memorial Field. Natural grass stays cooler than artificial grass—about 26 degrees cooler, according to Sherry—which impacts the comfort for the hundreds sitting on the field during the Festival. Artificial turf also allows for tent pegs to be hammered in at designated points alone, which Festival director Dyno Wahl said is fine for the main tent. Smaller vendor tents, however, move around the field from year to year—flexibility that only the natural or hybrid options would allow.

Likewise, the consensus among neighbors of Memorial Field seems to favor natural grass for its appearance, based on the responses of those interviewed for this story.

“I prefer grass,” said Alice Coldsnow, who lives across the street from the field. “It’s so much better to look at real grass and real water instead of fake grass. Most of the neighbors prefer grass, too.”

For athletic events, artificial turf brings its own advantages. There’s virtually no limit to the playable hours on artificial turf, and with the appropriate snow removal equipment, it can also be used in the winter. The expanded versatility is an enticing option for sports teams longing for spring or fall practice schedules. While artificial turf is more expensive at about $1.3 million in cost, it also requires relatively little regular maintenance. However, it needs to be replaced every 10-12 years, which Sherry said mostly negates the savings in maintenance.

“The climate and condition of most facilities in Sandpoint make it very hard to consistently schedule events in the spring and late fall,” said Mose Dunkel, who is involved in several student athletics programs. “Having a facility available that guarantees nearly year-around usability is ideal for all users of Memorial Field.”

“The city has the money to do it right for the best possible choice thanks to voters’ approval,” added Dunkel. “I feel like it’s a no-brainer to choose the artificial surface option.”