The U.S. Forest Service and Idaho Department of Lands have identified a large portion of North Idaho as high fire risk, making it one of two “priority landscapes” where officials will implement new statewide Shared Stewardship practices. 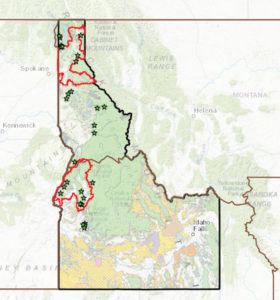 The governor’s office characterizes Shared Stewardship as a program “where federal, state and private land management activities will align to reduce wildfire risk to communities, create and sustain jobs, and improve the health of Idaho’s forests and watersheds.”

Governor Brad Little dispatched USFS and IDL in December 2018 to identify two priority landscapes, one in the northern and one in the southern portion of the state. The southern portion consists of 2.3 million acres in Adams, Washington, Valley and Idaho counties. The northern landscape encompasses about 2 million acres across Boundary, Bonner, Kootenai and Shoshone counties.

The governor’s office said the northern landscape “covers a variety of forest landowners and an extensive complex of wildland-urban interface where homes, infrastructure and communities may be at higher risk from wildfire.”

What Shared Stewardship will look like in action — where it will happen and how the various projects it prompts could affect access to public lands — is still largely up in the air, according to Idaho Panhandle National Forests spokesperson Shoshana Cooper.

“Shared stewardship is more of a concept and call to action than just identifying the priority landscape in north Idaho,” she said. “Shared stewardship encourages the Forest Service to be more deliberate in working with our neighbors and partners to expand forest restoration and treatment across boundaries to improve forest conditions.”

With the new statewide Shared Stewardship efforts, which are meant to build on preexisting tools, Little’s office announced a goal to double the number of acres treated on Idaho’s federal forests by 2025.

According to Little’s office, “Using mechanical treatments, commercial forest restoration treatments and prescribed fire, partners will focus treatments on the 6.1 million acres that have been federally designated for insect and disease infestation.” Treatments consist of fuel abatement in the form of thinning forests to emphasize healthy growth by removing excessive brush and dead or diseased trees.

Cooper, with the Idaho Panhandle National Forests, pointed out that the large landscapes identified for the statewide effort encompass projects that her district is already working on as part of its “integrated vegetation and fuels management Five Year Program of Work.”

“We do not anticipate deviating from these commitments,” Cooper said.

The governor’s office does not have an established timeline for when the advisory group will be finalized, though group members will be “named in the coming weeks.” The group may also seek out technical expertise from ad hoc members as needed.