Seeking the big ones:

Lake Pend Oreille is a pretty special body of water. You already knew that, though, didn’t you?

Did you also know that Lake Pend Oreille is the fifth deepest lake in the U.S.? Or that it has given up three Idaho state record fish, two of which are world records that are still holding strong since the 1940s?

For Lake Pend Oreille Idaho Club (LPOIC) president Barb Gillespie, one of the coolest parts about fishing our lake is the chance to catch a trophy fish with people that appreciate the sport and camaraderie.

“We’ve got the kokanee back, so the trophy fishing is back, too,” said Gillespie. 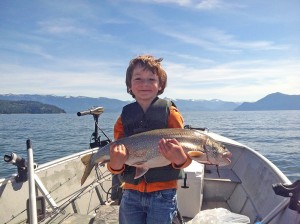 Every year around Thanksgiving, LPOIC holds their K&K Fall Derby, opening up the waters to area anglers to see who will take the title for the biggest mackinaw or rainbow trout. It’s one of three annual derbies the club puts on, and it’s the derby that most fishermen claim yields the biggest catches.

“The fish are bigger in the fall,” said Dave Ivy, LPOIC board member, two-time Spring Derby winner and Derby fisherman since 1983. “They’ve had all summer to feed and grow, and they’re closer to the surface. There’s nowhere else you can catch such a big rainbow trout.”

Most rainbows and mackinaw (sometimes called lake trout) prefer water temperatures between 48 and 52ºF. In the fall and winter, the temperature of the water brings the fish up closer to the surface, where they can be caught using planer boards instead of deepwater setups like down riggers.

There is no limit to the amount of rods an angler runs out on Lake Pend Oreille, so anglers can run as many lines as they can handle. On Ivy’s boat, the Wavehopper, his crew usually runs 18 rods. His boat is just one of many who celebrate a time-honored event that goes well back into the history of Lake Pend Oreille.

“In 2017, the LPOIC will mark its 70th year,” said Gillespie. “We have a Spring Derby the last full weekend of April, then our Members Only Derby in September, and now the Fall Derby, which lasts eight days.”

The K&K Fall Derby kicks off Sat. Nov. 21 and goes through Nov. 29, taking Thanksgiving Day off. This year, there is over $10,000 in cash and prizes given away to winners of respective divisions.

There are as many ways to win at the K&K as there are fish in the… uh, lake. In the adult rainbow division, the first place winner takes home a cool $2,000, while the adult mackinaw division winner earns themselves $1,000. There are also daily awards of $150 for the biggest mackinaw caught in the adult division each day.

According to Gillespie, the cash payouts are mostly generated from the $40 entry fee for the derby. One other way to support the club is to become a member, giving you the right to fish in Members Only derbies and divisions.

“We included the junior division so we could get kids outside more, to generate interest in outside activities,” said Gillespie. “We want to encourage family fishing and togetherness. After all, once they grow old enough and the youth division has ended, we have a slot for them to automatically enter the adult division.”

The junior division is for adolescents aged 14 to 17 years, while the youth divisions are for children aged 0 to 8 years and 9 to 13 years. In 2014, there were 149 adults who entered the Fall Derby and 18 youths.

Catch and release is a promoted activity for LPOIC, said Gillespie. If anglers are not going to use the fish for food or enter it into the competition, they are encouraged to release it back into the wild.

“We take great pride in having a clean, healthy lake, a place where the fish want to have a habitat. We work hand in hand with Fish and Game in getting that accomplished,” said Gillespie. “I think a lot of people are pleased that we have a catch and release policy. We’re trying to preserve this fish”

“We’ve had lean years and we’ve had busy years,” said Gillespie. “It’s been rising every year, and we’re hoping to see more this year. We’re going to have some 25-pound fish this year. If you’re a fisherman, this is what you want. You want the big fish.”

The LPOIC gives out a patch to those lucky anglers who have landed a fish from Pend Oreille that is 25 pounds or larger. Ivy has yet to win his patch, but he’s gunning for it this year.

“It’s a real honor to wear the patch,” he said. “Some of the old guys have had two or three on their jackets. I’ve landed a 22 pounder personally, but I still haven’t gotten my 25er yet.”

For Ivy, who has fished the derbies for over 30 years, the big catch isn’t the only reason he hits the water. It’s a mixture of camaraderie and competition that brings him back every year.

“How many people will be able to take part in this?” he said. “You’ve got to have a well-equipped boat that can handle the weather. You’ve got ice, wind, waves, freezing cold temperatures against you. It’s quite challenging out there.”

One way Ivy defeats the challenges is to bring a little bit of gourmet onto the water.

“On my boat, we have a nice kitchen where we cook a gourmet breakfast every morning,” he said. “You can’t sit on a boat and eat all day. It just about kills you. So we have one big meal in the morning and go all out. Apricot cinnamon pancakes, tequila omelets with ham, you name it.”

When asked what his predictions were for this year, Ivy said with a chuckle, “Well, I predict I’m going to win. If not me, then somebody on my boat.”

To enter the K&K Fall Derby, go to one of 20 ticket outlets in the region and sign up. Entry fee is $40 for adults, $20 for juniors and youths 0 to 13 years fish for free. For more information about the Lake Pend Oreille Idaho Club or to join, please visit www.lpoic.org.