A reason to give thanks:

A week before Thanksgiving, there’s hardly a moment to spare at Bonner Community Food Center.

The lobby is a model of controlled chaos. Ringing phones punctuate conversations between office workers and food bank clients. Families file in and out, discussing their benefits with employees or accessing the market place to select foods. A few steps away in her office, food bank director Alice Wallace is arranging for the collection of hundreds of frozen turkeys, all of which need to be transported immediately to food bank freezers before they thaw. 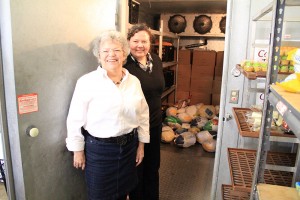 That’s par for the course around this time of year. Every November sees the food bank scrambling to secure as many turkey donations as possible before dinner distributions on Monday, Nov. 23, and Tuesday, Nov. 24, from 10 a.m.- 2:30 p.m. The days are never far from Wallace’s mind, even when they’re months away.

“We’ve been planning this since January,” Wallace said.

Between Monday and Tuesday, more than 700 Bonner County families will pick up a frozen turkey plus stuffing, potatoes, fruit, vegetables, cranberries and more, allowing every resident the chance for a happy Thanksgiving regardless of household income.

The clients are just as diverse as the food being offered, and each brings his or her own story to the table. Some are forced out of work by health issues, like one man and his family struggling with his diagnosis of pancreatic cancer. Others rely on the food bank to save precious cash reserves after losing a job. A large percentage of the bank’s clients are elderly individuals on fixed incomes.

Preparing for the two-day giveaways is a mammoth effort, one that always comes right down to the wire. According to Wallace, the food bank has secured about half of its 900-turkey goal, which is right about on pace from what she’s seen in previous years. Some of those 450 birds are donations from individuals or organizations like the Sandpoint Fire Department. Others are purchased from grocery stores, which typically offer heavily discounted rates for the large purchases.

It all comes down to the first two days of Thanksgiving week, which sees about 150 volunteers turn out to help distribute the masses of food. In almost every respect, it’s a community effort, Wallace said. Residents are instrumental in donating the food, business owners help with special pricing for purchases, public organizations like the police and fire departments help with labor and donation drives and families bring their children on distribution days to teach them the value of community spirit. There’s no formal process for those who want to help out—Wallace said to simply come by the food bank Monday or Tuesday morning and be ready to learn the ropes. 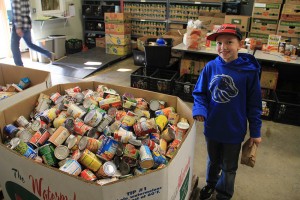 “We get email after email from people asking what they can do to help,” Wallace said. “I just tell them to come on in.”

That flexibility extends to potential clients, too. Wallace said individuals can drop by any time to register for the dinners. All prospective clients need is a proof of income to show they qualify for the service.

In some ways, the Thanksgiving rush of activity is a capstone to the food bank’s annual activities. This year has been a good one for the organization, especially compared to the struggles during the height of the recession only a few short years ago.

“That was a tight time,” Wallace said. “To try to keep the same level of service with so much lost funding was a real struggle.”

By contrast, this year saw a swell in grant funding, enough to purchase a new van capable of transporting more food. Wallace also received some much-needed help in administration when Debbie Love, formerly the director of Pend Oreille Arts Council, joined the organization as assistant director. According to Love, Wallace has been a terrific mentor since she began work several months ago.

In both good and bad economic conditions, the food bank’s commitment to its 4,200 clients each month remains steady. And while some years are easier than others, maintaining its operational standards is always a budgetary balancing act.

In all respects, support from the community is the food bank’s greatest resource, Wallace said. That was certainly true Nov. 4 when Wallace asked the Sandpoint City Council to lower an unexpectedly large sewer bill. The money spent on that bill, Wallace argued, could otherwise have been used for 2,400 meals. Initially, the council voted against the bill reduction, which prompted a sharp increase in donations. Even before she left the building, Wallace received donations from council members, meeting attendees and city employees. Many more soon followed. Council members had a change of heart, too. On Wednesday, members voted to rescind the previous decision.

It’s not too late to help the food bank meet build supplies for Thanksgiving distributions. Donations of money, turkeys or other foods all go a long way to maintaining inventories—just make sure you drop them off before Wednesday, Nov. 24.

No matter what happens, however, Wallace is confident the people of Bonner County will come together, ensuring all residents have a reason to give thanks next Thursday.

“We simply couldn’t do this without the community,” Wallace said.