Everyone knows the image of the executioner: a burly hooded man wielding a massive axe, like the shadow of death itself. As All Hallows’ Eve draws nigh, we will look into the grisly life of the medieval executioner.

Like most stereotypes, the hood-wearing, axe-wielding butcher wasn’t a completely accurate depiction of the medieval hatchet man. Executioners had a curious lot in life, and were often very interesting, tormented people. The ultimate edgelords, society needed them while also fearing them, shunning them and not empathizing with the poor executioner.

As with most societal roles in medieval life, the career of an executioner was generally a hereditary one passed from father to son. In many respects, it wasn’t much different from any other task in medieval society, as executioners often took great pride in their craft. 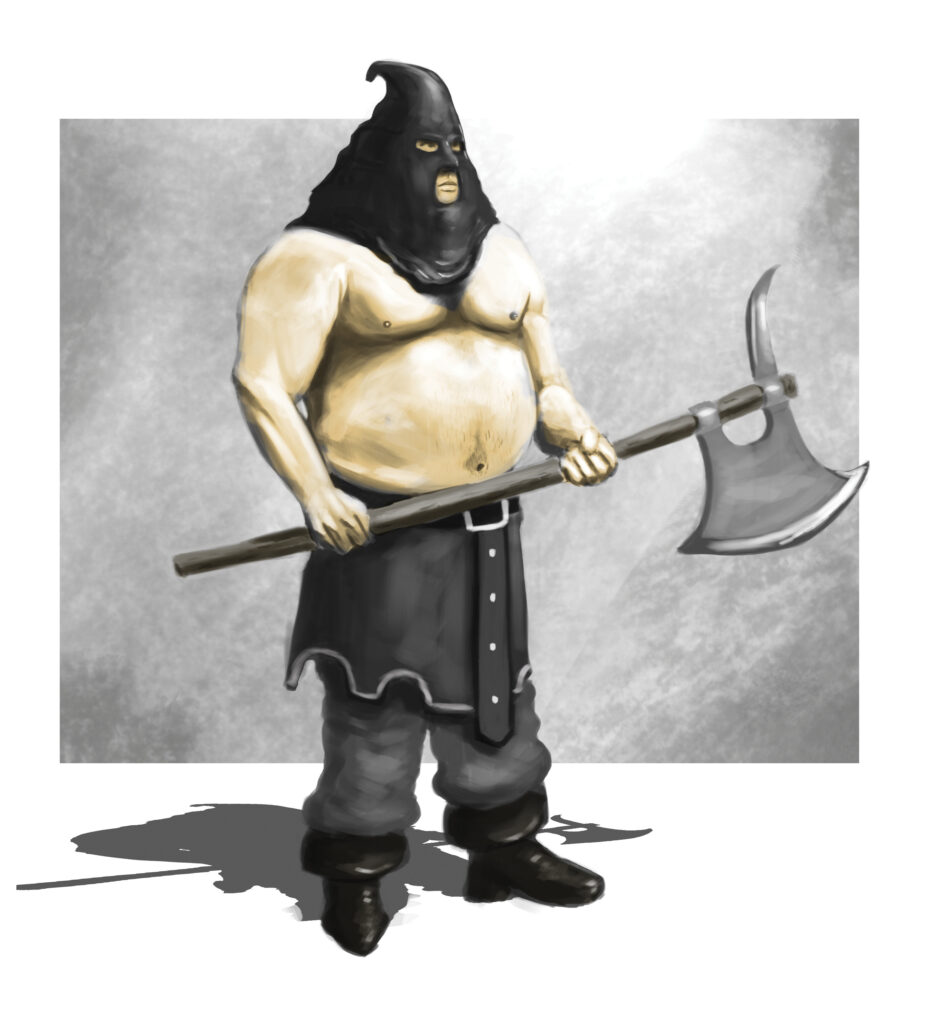 In most medieval villages throughout western Europe, an executioner took many roles throughout their day-to-day life: axeman, undertaker, farmer and physician. Properly and efficiently ending human lives took a great deal of anatomical understanding, as a clumsy and vicious executioner was viewed as cruel and sinful. Judgy looks weren’t the only fear of a bad executioner, as it didn’t take much to set off a crowd of bloodthirsty peasants if an execution took a few too many whacks to complete. The possibility for the executioner to join his intended victim was ever-present.

Well-trained and effective executioners understood what maladies plagued the human body — at least as well as any medieval mind could understand the human body before the discovery of microbiology — and because of this they were often their villages’ resident physicians. Imagine the dread of visiting the doctor’s office if you knew their specialty was killing the people you grew up with. You can imagine that executioners weren’t very popular for this reason, so they often had to overcompensate by presenting themselves as extremely pious and morally just — traits that were extremely important in medieval society.

An executioner’s piety and anatomical know-how helped them care for prisoners during the final weeks of their lives. They would get to know the prisoner, attempt to show them the error of their ways, and push them toward repentance for their crimes and allow them some semblance of hope with the promise of a good afterlife in heaven. Inevitably, they would still kill this person. Imagine the difficulty of the executioner’s task when they need not only perform their role flawlessly, but end the life of someone they’ve come to know very well.

We generally envision the executioner with a massive axe, but these implements are largely fantasy, as they would be extremely unwieldy and difficult to use. Executioners had many tools in their arsenal, though they seldom had the luxury of choosing which tool of the trade they would use for any particular execution. In medieval Germany, executions would be presided over by a judge and jury in something called a blood court, where the crimes of the condemned would be weighed against numerous factors, including their willingness to repent and whether or not the family they affected has forgiven them, which, in and of itself, is another very curious practice. The judge of this macabre court would decide the manner in which the condemned would shuffle off this mortal coil, and would then ensure the deed was, ahem, executed to their expectation.

Beheading with a sword was one of the more common forms of medieval execution, especially for those of the noble class. This form of execution took great finesse and understanding of human anatomy. Relieving someone of their head isn’t as simple as gripping a sword and swinging. Human bones are dense and fully capable of halting steel under the right circumstances. A medieval executioner would have needed to effectively navigate the edge of a sword between vertebrae in a single strike.

Those who had not held the hereditary fortune of nobility often suffered a much more brutal demise: at the end of a rope. Hanging common criminals was fairly commonplace because of the ease of rigging up a set of gallows, and the device could be reused without the need for sharpening or user fatigue. Punishments for relatively mundane crimes during this period could be particularly harsh, so it wasn’t irregular for a local lord to schedule dozens of hangings in a day.

Though far less common, fire was another tool used by medieval executioners. Sometimes the condemned were burned alive at the stake, and other times they would be boiled alive in what was essentially a massive cauldron. Another particularly gruesome tool was the breaking wheel, a device that could be employed to myriad ends — among them, breaking all of the accused’s limbs then threading them through the spokes of the wheel and leaving them for the crows.

Though undocumented, the mental toll this kind of life must have taken on executioners is undeniable. Despite the fact they were shunned by society, many apparently set aside the sword later in life and committed themselves to healing others, becoming fairly wealthy in the process.

Though the practice of executions has waned in recent years, the last state-sponsored public execution in Europe took place in 1997. It’s wild to think that Pokemon Red and Blue released on the Game Boy just a year before that.

Check back next week for more ghoulishly educational fun! Stay curious, 7B.