A long lime ago in a mine not too far away…

Delia Holton peered over the edge of the scow into the depths of Lake Pend Oreille. The boat rocked gently beneath the dancing feet of her family and friends, and the sound of celebratory music filled her ears — a welcome change from the unceasing racket of a hundred men digging, crushing rock and tending the kilns that dominated the soundscape of her small town. Delia lifted her hands from the railing, dusted off her palms and returned to the Independence Day festivities. 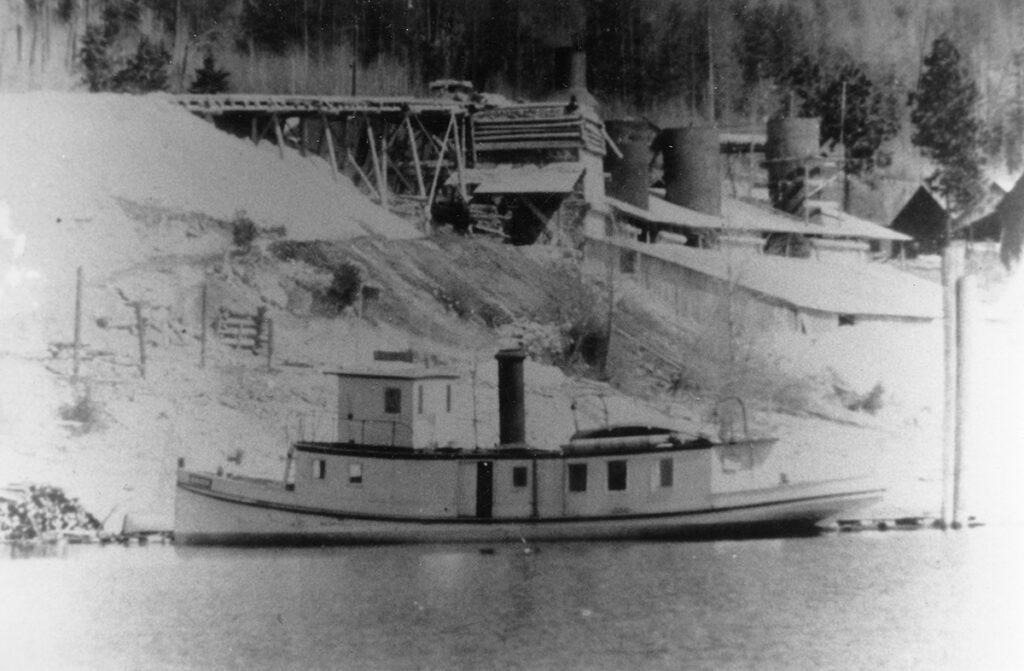 The steamboat Marietta at dock below the lime works in Bayview. Donor unknown. Photo courtesy of BCHS.

Merely two years after the Gray brothers staked mining claims on the remote east side of the lake near Lakeview, business was booming. So in 1886, the three well-to-do brothers scrubbed out their scow and took their neighbors out on a holiday cruise. But it wasn’t gold dust Delia may have brushed off her hands. It was lime.

By the early 1900s, the southern end of Lake Pend Oreille hosted the second largest lime plant in the West. History buffs and curious tourists can still find the visible remnants of early lime kilns in Bayview and get a hint of the gaping limestone quarries and cement operations in Lakeview across the bay.

The limestone deposits, called Lakeview Limestone by geologists, are as much as 200 feet deep, pushed close to the surface by the unique geologic and glacial activities that also formed the lake. Limestone, once ground to a fine powder and dried, can be used as a primary ingredient in cement. But how was this resource discovered?

The gold and silver fever of the mid-1800s drove miners north to Fort Steele via the Wild Horse Trail or east to Montana via Clark Fork, and some started using Lake Pend Oreille as a transit route because of the lack of roads in the area. By 1882, steamboats were making regular trips from Bayview to the newly built Northern Pacific railroad near Hope.

Hoping to find gold, of course — or at least productive silver mines like the ones in the Silver Valley to the south — prospectors started buying up Lake Pend Oreille shoreline. After a San Francisco paper falsely told of a successful gold mine in the area, 1,000 people suddenly arrived to create the town of Chloride, four miles north of Lakeview. In classic boomtown style, its array of tents and 17 saloons quickly dwindled away when the prospectors gave up their dreams of gold.

Once the rush subsided, savvy miners realized that limestone, dug up and discarded by other prospectors, could be its own source of profit. They built large kilns at Lakeview and Bayview to extract the lime from the ore. Mechanization and capital investment made it increasingly profitable.

Meanwhile, five farsighted miners laid out the town of Lakeview, and sold lots to pioneers looking to make a home in the beautiful countryside. Those who stayed worked at whatever job was at hand: mining and logging were the most abundant, but seasonal. Early homesteaders were able to make a little cash in the off-season by supplying cordwood to fuel the lime kilns and the steamboats that ruled the lake.

Both towns sent their finished products and ore by barge to Hope, where it was loaded onto trains bound for Spokane. Though barge was a fairly reliable method of transportation, it didn’t come without its share of issues. A barge tipped near Bayview in 1904,dumping more than 40 tons of lime into the lake. More often, lime was at risk of absorbing moisture from the damp air hanging over the lake, ruining the product.

By the 1900s, a housing and commercial building boom helped fuel the tandem industries of lime and bricks. The brickyards in Sandpoint complemented the lime production at the south end of the lake. Though the expense of shipping these heavy products limited their sale to a regional market, the bustling city of Spokane was happy to oblige.

Dozens of other lime prospectors joined the Gray brothers over the decades. Eventually, investors from Spokane, the International Portland Cement Company, and Washington Lime and Cement Company consolidated the many limestone mines, improving the efficiency of mining and production. The Spokane International Railroad won a bid to build a spur from the Athol area to Bayview. Transportation by rail removed the issue of moisture ruining the lime and provided a direct link to Spokane.

As more people came to work in the mining and processing of lime, news of the area’s natural beauty spread. Steamboat Landing, near Bayview, morphed into a tourist attraction and the area was touted at “the Switzerland of the West.”

In addition to providing fire-proof building material to much of Spokane, newspaper records show that local businesses also benefited from the production of lime. Agricultural lime helped improve the yield of alfalfa and other hays, plus helped lighten the heavy clay soil of the area. The now-defunct Experimental Farm in Sandpoint demonstrated how lime could reduce soil acidity and improve yields of many crops.

The Great Depression devastated the building boom, however, and the demand for lime, cement and bricks cratered along with it. Portland Cement changed its specifications for lime suitable for its operations, and Lakeview lime did not meet the new standards. Meanwhile, demand for agricultural lime couldn’t keep operations profitably afloat.

Once again, Lakeview and Bayview lost population and tourism, along with jobs. Eventually the main operator, Washington Brick and Lime Company of Spokane, shuttered its business — going so far as to tear up the railroad spur that served the area’s commercial and tourist needs.

Lakeview’s remote location created a more severe economic blow, leaving only the hardiest residents to endure the difficulty of carrying basic food and supplies across the water. Those who did stay could tell grand stories of summer adventures, fishing, hunting and exploring — just as current residents do now.

Then, just as Bayview nearly faded away again, the Japanese bombed Pearl Harbor and an inland Naval training station was envisioned by Eleanor Roosevelt, which would revitalize Bayview once again. Delia Holton, sailing on the lake in a humble lime scow in 1886, could never have imagined the prowling submersibles that would soon be plying the waters of Lake Pend Oreille.