Sandpoint resident—and planetary citizen—Gary Payton is in Paris attending COP21, the conference on global warming. On Tuesday, with the help of Idaho Conservation League (ICL), he addressed 60 people in Sandpoint’s Columbia Bank auditorium. Speaking via Skype, Payton gave a report on the goals and progress of the conference, concluding with a call to action for neighbors in Bonner County. 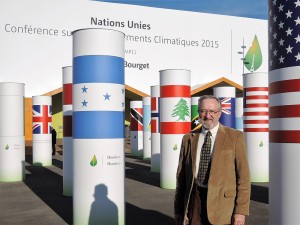 The conference focuses primarily on stopping the temperature of the world from rising to a disastrous level. Over the past half century, the planet’s average temperature has risen 1.8° F (.85° C); mostly due to increased atmospheric greenhouse gasses resulting from burning carbon-based fuels. The largest source is generation of electricity; coal-fueled plants being a large contributor.

Payton, who served 24 years as an Air Force officer, had a second career working globally with the World Mission of the Presbyterian Church (U.S.A.). As a retiree, he works with ICL and Lake Pend Oreille Waterkeeper on the issues of coal and oil trains. He traveled to Paris as a representative of PCUSA, and more locally, ICL

“Nothing in my life,” Payton said Tuesday, “is as important or as large as this event I’m attending now.”

He reported that Monday, November 30, 150 presidents and prime ministers from around the globe met, the largest gathering of world leaders in history. Then, negotiators (delete thousands of representatives) from 195 nations began working on details of an agreement to limit the temperature rise to less than 2° C (3.6° F).

By mid week, negotiators had reduced the draft agreement from 48 pages to 29. The final agreement will be finished by Friday, Dec. 11, or Saturday at the latest.

When asked how COP21 differed from conferences in Kyoto, Japan, in 1997 and Copenhagen in 2009—neither of which was effective—Payton responded, “The biggest difference is momentum. Increased evidence of warming and acceleration of weather abnormalities has changed this conference’s environment.”

“This is a ‘now’ issue,” Payton said. “A young Scot, part of a group who bicycled from their home to the conference, said it best: ‘We caused it. We’re threatened by it. We need to fix it.’ It’s a global issue. It’s a local issue. And one key is individual action.”

Payton concluded by calling the audience to speak to their Congressional delegation about two important issues that will be voted on as early as this week. He asked individuals to speak out against dismantling the 40-year-old ban on exportation of crude oil from the US, and to speak up for funding the Green Climate Fund, which is the US’s commitment to reducing carbon emissions, and thereby, global warming.

He also invited people to become involved in Sandpoint350, the local branch of 350.org; and to join ICL and  Waterkeeper in speaking out against the rise in coal and oil train traffic through Sandpoint that would be precipitated through the building of coal and additional oil terminals on the west coast.

Contact your Senators and Representative at www.senate.gov or www.house.gov Learn about the Paris conference and the challenge of global warming at www.350.org. Check out local issues and opportunities for action at www.idahoconservation.org or  www.lakependoreillewaterkeeper.org