A human face to the issue:

The 8th Annual Conference on Refugees, held at Boise State University on Feb. 8 and 9, was a gathering of approximately 425 people. I attended and planned to return with my head filled with facts. I didn’t know I would come back with my heart overflowing. I was inspired by talking with refugees, hearing their stories, learning how grateful they are to be in America and how eager they are to contribute. 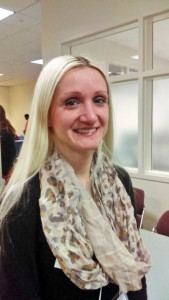 In our world today there are 60 million refugees, forced from their homes by violence and war. Less than 1 per cent will have the opportunity to come to the United States. Those who do will have gone through a rigorous vetting process that lasts from 18 months to three years. When they arrive they must learn English, find a job, and learn about life here. They will be assisted by resettlement agencies, but given cash assistance for only eight months, with extended services that include referrals, training and coaching.

There are four resettlement agencies in ID; three in Boise and one in Twin Falls. That is where the refugees will go, where there are people who speak their language and can help them learn English and where other support services are located. The refugee resettlement process in Boise has been identified by the White House as a model for other cities. 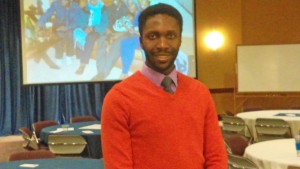 Fidel Nshombo, a refugee from the Congo, has published two books of poetry. Photo by Brenda Hammond.

The worsening crisis in Syria has created over four million refugees—80% of whom are women and children. Not all of them are seeking resettlement but those who apply are identified with iris scans. Only those with biometric scans will be referred for processing, which is especially slow and deliberate.

These facts come to life when you have the opportunity to meet refugees and hear their stories of living in crowded refugee camps, where they may be without food and water for many days. Stories of living outside of the camps in cities where they are not allowed to work but have to maintain an address where they can be contacted by immigration officials for repeated interviews. Often applicants are asked the same detailed questions months apart—and disqualified for any discrepancies. After each interview they are told only, “We will contact you.” They have no idea of how long it will be before the next step—before a “yes” or a “no.” 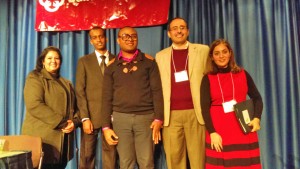 One of the young women I met was Belma Sadikovic, who fled with her family from Bosnia and arrived in the U.S. in 2000 when she was 16. She found that education was the key to integration and success and told me proudly that she is completing her PhD thesis at Boise State on “How Education Impacts the Integration of Refugees.” She also works as an adjunct instructor and research assistant. Her large eyes filled with tears as she told me, “I just want to be able to give back.”

I also met Fidel Nshombo, who fled the Congo at age 12 along with four other boys when soldiers came to their village and started killing everyone. He had no idea of where his parents or siblings were, and began a ten year journey on foot across four countries with only hand-drawn maps and directions from people in the villages they passed through. One of the boys died along the way and finally, after surviving kidnapping, torture and constant hardship, he arrived in a refugee camp in Zimbabwe where he was able to apply to come to America. When he was accepted he had no idea where Idaho was—knowing only that a woman in the airport in New York told him that it was a very cold place in the worst part of America and that he would surely die there.

Fidel has found, since arriving in Boise, that it is wonderful place. His family has been located and he has been reunited with his parents and some of his siblings. Once he realized that he was safe, the trauma that he experienced began to come back to him—and as a way of processing that he began to write. Now he has published two books of poetry, “The Route to Peace: Parts I and II,” with a third to be released this year.

Fidel works in Boise, is married, has three beautiful daughters, coaches soccer and has good friends that have helped him connect with his family. He has been appointed a delegate to the National Refugee Congress in Washington, DC, and was honored by the major of Boise for receiving his American citizenship and for his contributions to the community.

I feel so privileged to have met him, Belma and others like Rafah, the quiet Iraqi woman with a PhD in Mechanical Engineering, loquacious Patrick from the Congo, whose enthusiasm and joy bursts forth from his broad smile, and many others.

It’s been a long time since I have felt so proud to be an American and I realize that one of the great benefits of getting to know refugees is that they demonstrate what a great country this is, and teach us all not to take what we have for granted.