Hope was a relatively new town when James Henry Towles arrived there no later than 1901. The Northern Pacific laid tracks across the Idaho Panhandle in 1881-1882 and transcontinental trains were running a year later. There was little more than a small train station in Hope at that time, but the town began to grow by the late 1880s when the Northern Pacific opened Highland House, a hotel catering to tourists. Hope then became a railroad division point in 1888 with a roundhouse, shops and employee housing. More than 300 people were living there in 1900 — all white except for a group of 16 Chinese residents, mostly railroad workers, and a single Black man, a hotel porter named Charles Vires. Other Black men and women lived in Hope from time to time but Towles was the only one who stayed long-term, playing a significant — though mostly forgotten — role in the community.

If he’s remembered at all, Towles is often simply known as the Black saloon keeper in early-20th century Hope, though a less savory moniker also exists in the record. Yet, drawing on the federal census, deed records, city directories and historic area newspapers, a much richer portrait of his life can be uncovered. What it reveals is a hard-working entrepreneur, a respected member of his community, a friend and a neighbor. Meanwhile, it opens a unique view of life at a time when the railroad lines and towns we know today were new. 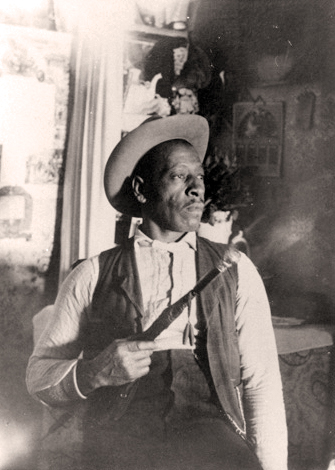 Born in Missouri around 1857, James Henry Towles, better known as Henry, was in his 40s when he came to Hope. He was educated — at least well enough to read and write — and he settled down to make a life for himself in the small lakeside town. Between 1901 and 1908, he purchased four large lots below Highland Avenue, at the northwestern end of town, and nine adjoining lots above. He had a comfortable home, garden and orchard on this property, with enough room for some farm animals.

In 1902, the Kootenai County Republican reported that J.H. Towles, “a southern gentleman of experience in tobacco raising,” was trying several varieties of tobacco on his property. He had started plants in hot beds in March, transplanted them in June and grew them to a height of 18 inches by early October, a few weeks before his planned harvest. The four varieties that he planted were Twist Bud, Iron Oker, Yellow Prior and Long Green. There were no further references to tobacco, suggesting that even the mild climate at Hope was not good enough for this crop.

Towles also raised chickens, hogs and at least one cow, and problems with all of the animals garnered attention in the newspapers. In 1905, Towles and another nearby rancher, Mr. Bullivant, regularly collected slops from one of the Hope restaurants to feed to their hogs and chickens. One batch of the food waste was tainted, most likely with strong lye from the kitchen, and caused the death of two hogs and 20 chickens at Bullivant’s place. Towles had even worse luck, losing five fine hogs that he had contracted to sell, along with 70 hens. An unhappy Towles told the newspaper, “Those two buckets of swill cost me a hundred and fifteen dollars” — more than $3,000 in current value.

The cow landed Towles in a different kind of trouble. Officer Nugent impounded the animal in November 1910 when he found it roaming loose in Hope. This action angered Towles who complained that stock belonging to businessmen and members of the city council were allowed to roam the streets at will, with no consequences to their owners. This comment, labeled as “disrespect,” led to a hefty fine of $20 — equivalent to more than $500 in 1910.

This small-scale farming was not the main source of income for Towles. He worked as a saloon keeper, probably in more than one bar over the years. He took over the Betz saloon in the Rainier Hotel in 1910. After hiring men to renovate the building, he opened his bar on February 10. His name periodically appeared in the newspaper in connection with his business. In one instance, he broke up a fight and later was called as a witness in the trial where “his testimony provided several amusing features and he had the court and jury laughing.” The defendant, however, did not find this funny and several months later accused Towles of allowing gambling in his saloon, threatening his liquor license. The board of commissioners, after hearing from Towles, took his side and granted the license.

In November 1905, Towles helped solve the problem of “box car rustlers” who had been breaking into parked train cars in Hope to steal everything from coats and watches to booze and bacon. Three men walked into a saloon one evening and offered to sell bartender Ezra Johnston kegs of beer and cases of eggs at absurdly low prices. Johnston told them to come back later and, after they had left, Towles, who had been dozing nearby, surmised that these were stolen goods.

“You think too slow, Ezra,” he told the barkeeper. “I’m going after them.”

Towles soon ran into a local man serving as a fence for the robbers, who offered to sell him hams for 50 cents apiece (about $13 in today’s money). He agreed to take 40 hams and some bacon. When the fence left, Towles woke Judge Dooley and a couple of other men. Together they caught the crooks red-handed and recovered the stolen goods. The local fence served three months in the county jail at Rathdrum while the other two robbers each got a year in the state penitentiary.

Towles was a single man when he moved to Hope and he was still listed as single in the 1910 census. He did not always live alone, however. A widowed cousin, Emma Elgin or Elligan, lived with him in 1910, along with her young son. She died in a tragic accident that August. George Davis, the porter at the Rainier Hotel, invited Elligan out for a rowboat ride on a beautiful summer day. Their rented boat soon began to leak, frightening the woman so much that she stood up to move closer to Davis, tipping them both into the water. Davis tried to rescue his companion but she never resurfaced. 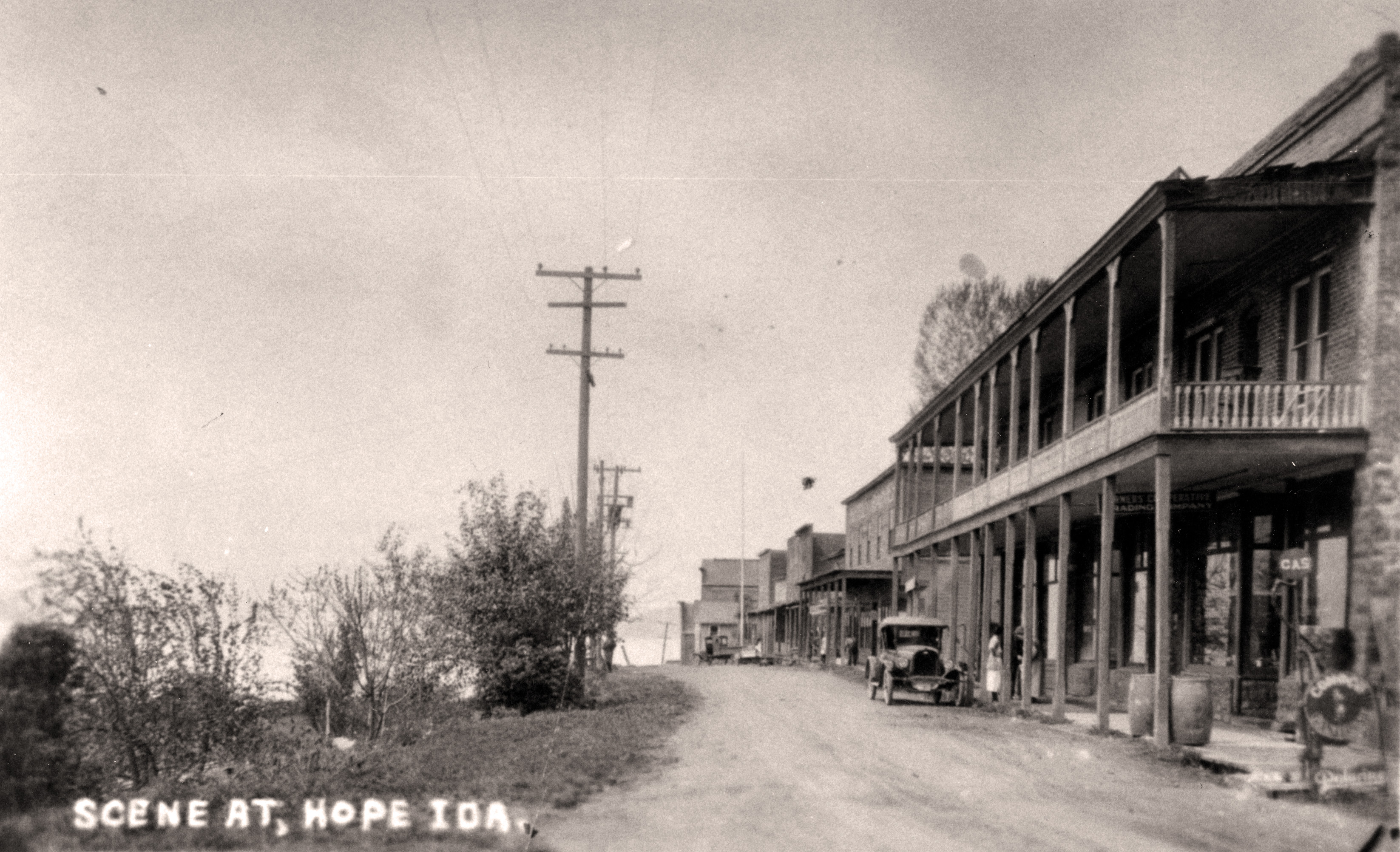 Elligan, known around Hope as “Henry’s cousin,” was “a quiet, modest woman well liked by her neighbors,” according to the newspaper. “The entire community regret her untimely demise.”

At the time of the accident, Henry’s mother also was living with him on an extended visit from her home in Kirksville, Mo. Later that year, he traveled to Missouri to see his mother just before she died. He returned from the trip a married man. The Pend d’Oreille Review reported that, “Mr. Towles brought home a charming young bride and he has been distributing cigars freely to all the boys.” The paper noted that he had “a comfortable home on the hill at north Hope.”

Very little is recorded about Towles’ wife, whose name was Martha, evidently known as Mattie. She had died by 1931.

Undoubtedly, as one of the very few Black residents in the area, Towles experienced racism, both subtle and overt, during his life in North Idaho. The incident with his cow, where he was slapped with an exorbitant fine for showing “disrespect,” is one example. The original photograph in the museum identifies Towles as “N—-r Henry” — an epitaph used by at least one lifelong Hope resident interviewed in the 1970s.

At the same time, the local newspapers seemed to treat Towles like any other man of the time. Articles about him almost never mentioned his race, and his occasional trips to Sandpoint or Spokane were noted just like the travels of other businessmen. He supported local community activities, donated to the Red Cross and bought Liberty bonds during World War I. When the ladies of the Greater Hope Club wanted to raise money to build a sidewalk between Hope and East Hope in 1912, they solicited prizes from local businesses. Towles donated a box of candy.

Some Hope citizens took the train to Sandpoint in March 1913 to hear the famous Black educator, Booker T. Washington, speak to a capacity crowd at the Rink Opera House. The group, listed in the order given by the newspaper, included Dr. Knapp, Mrs. M. Wood, Miss Ethel Larson, Mr. and Mrs. Henry Towles, and Mr. and Mrs. Jones.

Towles’ job as a saloon keeper ended by at least Jan. 1, 1916, when statewide prohibition went into effect, and he began working for the Northern Pacific shops in Kootenai. During the 1920s intermittent mentions in the newspaper revealed that he was living in Spokane or the Seattle area, returning periodically to check on his property in Hope. He was employed in the Northern Pacific yards in Tacoma in 1926 but returned to North Idaho around 1931 when he was listed in poor health.

Towles sold his Hope home and property to Arthur Croy in 1937 and bought a place in nearby Clark Fork. He apparently lived there quietly until his death on Jan. 10, 1941, at the age of 84. Reverend A. H. Morton presided at the graveside service when Towles was buried in Pinecrest Cemetery. His grave remains unmarked.

Thanks to Dale Coffelt of Coffelt Funeral Services for information on the location of Henry Towles’ grave. Thanks also to Hannah Combs and Heather Upton for their assistance with the photograph collection and archives at the Bonner County Historical Society.