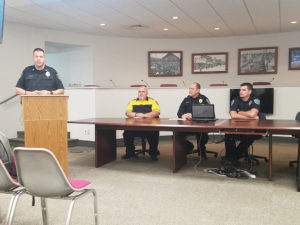 In a press conference Wednesday morning, Hutter and Clark joined with Sandpoint Police Chief Corey Coon and Coeur d’Alene Police Captain Dave Hagar to detail the events of the shooting, which left both Hutter and Clark wounded by gunshots. According to Coon, Hutter is fully recovered from his wounds and back to his regular work routine. Clark, meanwhile, has recovered from a neck wound but is still healing from a separate injury to the hand. He is on light duty but eager to return to full work responsibilities.

“He’s anxious to get back to full duty, but he’s learning patience,” Coon said.

The shooting incident took place on March 5 and ended with the assailant, Brandon Kuhlman, dead by three gunshots. Hutter was struck in the chest and thigh, while Clark was hit in the neck and hand.

According to McHugh, Hutter and Clark arrived at the residence of Kuhlman’s grandfather, William Crawford, to conduct a welfare check. Upon arrival, they spotted a gun on Crawford’s hip, and Clark approached to disarm him. At that moment, Kuhlman, located farther back in the house, began firing “without warning or provocation.” The officers moved outside the residence to a more defensible space and returned fire, while Kuhlman advanced, firing more shots. Within moments, the firefight was over. Kuhlman retreated back into the house struck by multiple shots and was later found dead. Despite being in the line of fire during the gunfight, Crawford sustained no wounds.

After the gunfire subsided, Hutter and Clark worked to apply first aid and ensure that they and Crawford were safe. They also anxiously awaited the arrival of medical care and backup.

“It was a matter of maintaining cover and making sure the suspect didn’t reappear and reengage us,” Hutter said.

According to Hagar, both officers demonstrated extraordinary presence of mind during the incident.

“Their action to provide self-first aid and buddy care were exemplary,” he said.

City officials said the community response in the aftermath of the shooting was overwhelmingly supportive. It made the officers’ process of healing and transitioning back into work a seamless process. According to Hutter, the incident is also a reminder that even in a quiet town like Sandpoint, it’s impossible to know what will happen in the line of duty.

“You just never know — that’s just it,” he said. “Any particular day, anything can happen.”