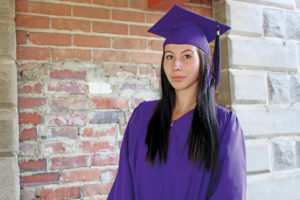 Jessica Inman and Alex Merideth had very different paths leading up to — and during — their time at the alternative school. Still, they’ll take the same path today, June 7, across the Sandpoint Events Center stage as they receive their high school diplomas.

Inman made the move to LPOHS as a freshman after an episode she describes as “losing her mind” at her old school.

“I was failing all my classes. I had a lot of anxiety,” she said. “I threw my papers, flipped my desk and punched some lockers going down the hall.”

After a recommendation from a counselor, Inman considered going to LPOHS. Her mother, one of the alternative school’s first graduates when the school was first founded, wasn’t sure if her daughter should make the move based on the reputation the school had acquired since her time there. Inman went to LPOHS, and said she found herself the subject of those exaggerated stereotypes.

“Quite a few people ask me if I have a drug problem, if I have a child or if I’m pregnant,” she said. “That’s not me at all.”

At LPOHS Inman said she learned to handle her anxiety and found the academic support she needed.

“I used to be afraid of the world,” she said. “This school has entirely changed my mindset.”

A lot of that transition had to do with her relationship to LPOHS staff — namely counselor Sara Gosling.

“She knows just about every detail of my life,” Inman said, adding she’s had past issues with relationships and emotional connections in general. “She’s taught me how to still protect myself but also give to others.”

Merideth came to LPOHS as a freshman after already hearing from friends how much they loved it. He admits now that he may have purposefully acted out in order to convince his parents to transfer him to LPOHS. But Merideth learned quickly that the acting out would stop at his new school. 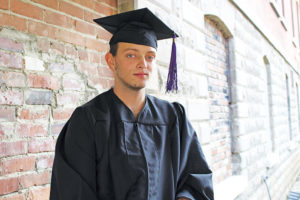 Merideth’s high school career hasn’t been a traditional straight line. When his father became so sick he could no longer work, Merideth quit school in order to work full time and support his family. He said LPOHS told him he could always come back to finish his credits when he was ready.

“I was told the door was always open,” he said.

Merideth said even after the last five years of being in and out of school, he sees the life of a teenager in high school as far harder than working and paying bills.

“High school is the hardest part of it all, because you’re putting in all this effort and work into your future, but you’re not seeing any of that reward now — but later on, it is your golden ticket,” he said. “I realized that, so I came back to finish up.”

And these students don’t just have their own stories — they know one another’s well. When Inman talks about LPOHS helping her gain control over her anxiety, Merideth vouches for her. When Merideth mentions the ways in which Penrose has supported him through his education, Inman nods along, familiar with Merideth’s five-year high school journey.

“We are such a tight community,” Inman said of LPOHS, “but we don’t get along all the time.”

Merideth let out a laugh in agreement: “Yeah, we’re a family, but you get all the dirty parts of family, too. You have drama, and crying, but also the love.”

Both students agreed that although LPOHS may have a reputation as the “troubled kid school,” they have countless people in the community supporting them. Inman, who hopes to attend North Idaho College in the fall to work toward an elementary education degree, said she received $10,000 in scholarships through LPOHS alone, and $12,500 total.

“That just shows what this school is about. This is going to change my entire future,” she said. “I have a chance at who I want to be.”

LPOHS graduation is Thursday, June 7 at the Sandpoint Events Center at 7 p.m.