Cuba: an island of possibilities

In Cuba, buying a pair of shoes can take multiple days, even if you’re walking around barefoot — traveling cross-country barefoot. And the best and worst of the place can be summed up this way: when an unknown Cuban man finally lends you a pair of secondhand, too-big flip flops, they become for a moment the most magnificent pair of shoes you’ve ever slipped onto your feet. 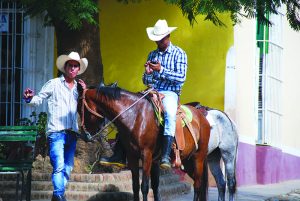 In Trinidad, Cuba, cowboys pause in a rare wifi zone to check the internet. Photo by Katie Botkin.

On a recent ten-day trip to Cuba, my boyfriend decided to be clever and bring only one pair of shoes. Leather-sandal Earth Runners. Hiking in the mud of a washed-out trail in Eastern Cuba, they broke.

We tried to find him another pair of shoes in the nearby town of Viñales, to no avail. It was Sunday, which meant any shoe shops (such as they existed) were closed. We ate dinner on the front porch of a place, and he tucked his bare feet under the table before anyone could see. The next day, we traveled eight hours to the sixteenth-century town of Trinidad, six of them crammed with 14 other foreigners into a 1950s-era army truck with plastic seats bolted to the floor. The uninsulated floor burned with heat and the exhaust fumes coming through the open window covered our sweaty faces in a gritty film.

When we arrived at our casa, it was too late to buy shoes in Trinidad. I told our host, an endearing older woman who chattered at me in Spanish like I could understand her, of my boyfriend’s predicament. I had researched and memorized a couple of phrases for this occasion. The woman found this situation wildly amusing, and enlisted several neighbors to find a pair of old flip-flops that he could borrow. My boyfriend is fastidious about most things, including sharing foot germs with strangers, but he had apparently come to terms with the realities of being barefoot in Cuba and was genuinely ecstatic. 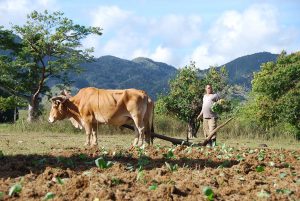 So we went to find dinner. We passed one place that I said looked nice, and my traveling companion objected that it was too fancy. But I convinced him. It was not too fancy, that’s just Trinidad, where everything is fancy, in stark opposition to the day’s ordeals. We sat on a rooftop terrace, just the two of us with the full moon overhead, and ate three courses and drank pina coladas and some local honey-infused cocktail, all for less than $30. “This town is awesome,” we toasted, standing up, because the hard plastic seats imprinted on us and there was no way we could sit down more than was absolutely necessary.

The next day, we went looking for shoes to buy. The first place we went, a spot the locals frequented, had an impossibly limited selection. We got directions to a little boutique and purchased imported shoes for a price I doubted any local could afford, as well as some cheap flip-flops. The flip-flops did not come in many sizes so we got the closest match. 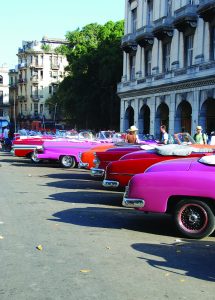 A rainbow of antique cars used as taxis line up in Havana near the capitol building.

Transportation and a limit of goods seem to be some of the biggest challenges facing both tourists to Cuba and the Cubans themselves. The U.S. embargo has certainly not helped the situation; Cuba’s resistance to capitalist interference in their daily lives has also been a factor. There is no McDonald’s, no Starbucks, and in large part Cuba’s staunch determination to be its own thing, to go its own path, is what makes it so vibrant, so culturally rich. Tourists come because the architecture is unmarred by neon lights, because the Caribbean shorelines have not been exploited by resorts, because teams of horses pull hay wagons in the streets. Because taxi drivers stop to high-five one another through their open windows. Because people live face-to-face, and network over phones; everyone seems to know everyone without ever resorting to social media stalking.

The Cuban political system is complex, in that its nuances have shifted many times over the years. The death of Fidel Castro in December brought on national mourning; over breakfast at our casa, a couple from the Netherlands told us they’d extended their trip by ten days because for ten days following Castro’s death, there was no music, no celebration. No live music in Cuba is virtually unheard of; when the power went out in Trinidad, and the city plunged into full darkness, the music did not stop. The café owners lit candles and the music played on. We walked streets lit by moonlight and listened until the power reignited, whereupon we turned around and went back to our casa.

The older generation remembers before the revolution, speaks proudly of how their literacy rate rose out of the gutters to one of the highest in the world afterwards. Some of the younger generation compare their lot to what they see elsewhere, and wink a bit when they say the government system is good. They describe how the government pays a set price for 90% of their tobacco crop, a low price, and how they make most of their money from the remaining 10%, selling hand-rolled certified-organic cigars to tourists.

Cuba’s exports and imports have long been a matter of political wrangling, from the time the Spanish landed there onwards. Castro’s push to diversify the country’s exports and economy has landed partly in the laps of the tourists who flock there: despite any embargo or lack of comfort, the tourists love it, and they pay. They are scanned by metal detectors when they land in the airport, just to be sure they’re not importing another assassination attempt. They are finagled by the network of everyone-who-knows-everyone, since everyone wants a small booking cut. But they come, and they are welcomed in Cuban fashion.