While it’s important to regularly honor those who serve our country in the armed services, every once in a while an individual deserves a bit more recognition. This was the case last week when Senior Airman James Wolf, a former Sandpoint graduate, was named Airman of the Week for the U.S. Air Force. 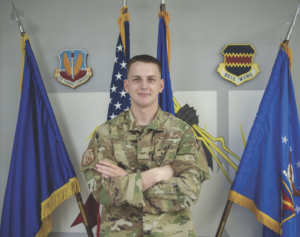 Wolf, who graduated from Sandpoint High School in 2017, is stationed at Kadena Air Base in Okinawa, Japan, working as a ground system maintenance technician with the 390th Intelligence Squadron.

The largest combat wing in the Air Force, operating out of the largest Air Force installation in the Pacific, the mission of the 18th Wing is to “deliver unmatched combat airpower and a forward-staging base to provide sovereign options that promote peace and stability in the Indo-Pacific region, ensure the common defense of our allies, and enhance the United States’ unparalleled global engagement capability,” according to Staff Sergeant Daniel E. Fernandez, with 18th Wing Public Affairs.

Fernandez said Wolf was honored with Airman of the Week because he “played an important role in assisting the 18th Communications Squadron with a network infrastructure update base-wide to switch configurations and verify compliance with regulations, leading to the communications squadron successfully passing its Command Cyber Readiness Inspection.”

In addition to being named 18CS performer of the week, Wolf was recently elected as a council member for Wired Bean — a recreational and morale facility sponsored by the Chaplain Services that provides a safe space for young, single Airman to gather and enjoy home-cooked meals.

“As a council member, [Airman Wolf] planned four morale events for 101 people, spoke at eight First Term Airman Courses classes on behalf of the other council members and held an event where he briefed the Air Force Chief of Chaplains, Maj. Gen. Schaick and Chief Master Sgt. Jackson on everything the Wired Bean does,” Fernandez wrote to the Reader.

Airman Wolf at work with IT and networking tasks at Kadena Air Base in Okinawa, Japan.

On top of his outstanding work and volunteering, Airman Wolf has accomplished 21 credit hours toward his Community College of the Air Force degree, bringing him just three credits shy from completion.

We emailed Airman Wolf and asked a few questions after he’d received this honor. What follows are his responses, lightly edited for space.

Sandpoint Reader: Do you have a special area of expertise?

Airman Wolf: There’s not a mission on base not affected by our team. My job in focuses on the equipment behind our computers, like routers and network switches.

SR: What were some of the reasons that led you to join the U.S. Air Force?

Wolf: I joined because I saw it as a way to go to college without going into debt right out of high school.

SR: Tell us what your daily life is like in Okinawa. What are some of your duties that you are particularly proud of?

Wolf: While working with 18CS, I was able to work on one of the largest networks in the Pacific, spanning the entire island of Okinawa. Because Okinawa has the U.S. Air Force’s largest combat wing and hosts many U.S. Marine Corps, Naval and Army forces, 18CS Airmen have a larger, broader role, carrying data to several of the other bases and protecting everyone from unfriendly sources through network security.

SR: Can you explain a little about what the 18th Wing’s mission is in Okinawa and why it’s important that airmen like yourself are part of it?

Wolf: The 18th Wing defends U.S. and Japanese interests. The 18th Wing is the keystone of the Pacific and something of this scope requires a lot of well-trained airmen to get the job done.

From all of us here at the Sandpoint Reader, as well as the rest of our community, we’d like to congratulate Airman Wolf for this honor and thank him (and the rest of the 18th Wing) for their service to our country.