Letting the music move him

Born to a musical family in a culturally rich fishing community on the west coast of Ghana, Afroso has built a life of musical creation that celebrates his African roots and aims to bring people around the world together with the power of storytelling and song.

Though his journey as a performer has led him across the globe, his music — sung mostly in his first language, Ga — is largely influenced by the time in his youth he spent working on fishing boats. The fishermen sang a capella songs of the sea, and those songs continue to guide Afroso’s artistic endeavors.

“The stories I tell, everything that comes out of my mouth and also when I’m writing, all kind of circles back to fishermen and my time being around fisherfolks and fishmongers.

“It just seems like if I want to do authentic work,” he added, “then I have to do it from my background.” 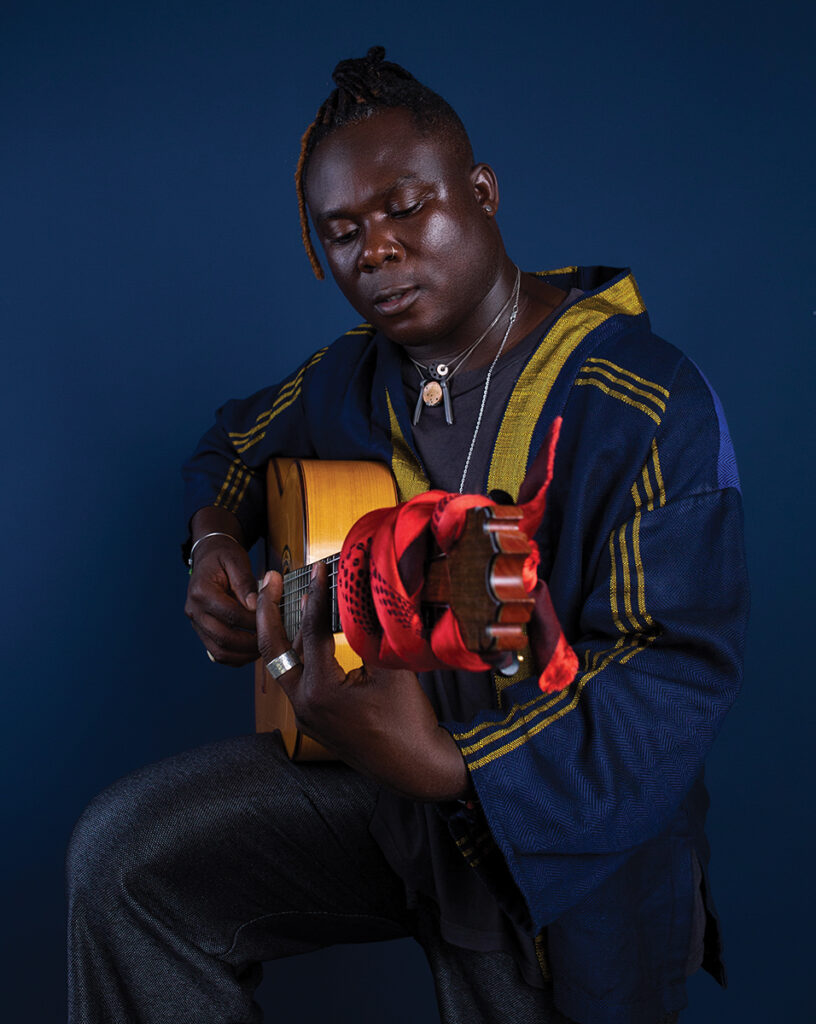 Afroso will share that background as he and his trio perform at the Panida Theater on Friday, Oct. 29 at 7:30 p.m. Tickets are $22, and the doors will open half an hour before the performance. The show launches the Pend Oreille Arts Council’s 2021-2022 Performing Arts Series.

“Okaidja is such a dynamic performer to kick off our season,” said POAC Director Tone Lund. “We are excited to bring him with his globally acclaimed band to the Panida.”

Aside from being reflections of his creative spirit, Afroso’s work is also an act of preservation. He said his first language, Ga, is slowly fading away, and he hopes that his work will keep the culture alive in the same way he sees the fishermen of his home village keep the culture alive.

“The best way for me to do that is to sing in my language… because I want my people to hear certain words that are fading away,” he said.

For instance, Afroso said that many people have ceased using the Ga words for the months in the year, opting instead to say “last month” or “next month.”

“If they hear them in songs,” Afroso said of words that are fading from his native tongue, “then it is a way of preserving a language, and also keeping things that are kind of fading away in songs so that we don’t forget them.”

The intersection of cultural preservation and sheer joy in the process has afforded Afroso a unique and buoyant style, highlighted by intricate guitar picking and energetic percussion work. Not only are Afroso’s live shows known for both traditional and contemporary African musical offerings, but also dancing. When Afroso dances, it is clear that the music moves through him.

“When I dance, and when I’m singing, I don’t think at all. I feel like everything stops in my head… It is not something I plan,” he said. “Dancing brings the true me out, because it was the first thing that I put my energy [into]. I always say my first love was dancing — and I was also very bad at it.”

Through learning to dance, Afroso said he also learned to focus — a skill that would serve him well as he became a self-taught guitarist and percussionist. Now, as a musician, Afroso said he finds himself thinking like a dancer — creating music with drama and strong rhythms to move his listeners.

“The music or the drumming is what shifts the dancer,” he said. “For us, music and dance, or drumming and dancing — they are always together.”

Aside from the music and dancing, Afroso also incorporates an educational element into many of his shows. He lauded groups like POAC, which seek artists with an educational component to their work. As part of his visit to Sandpoint, Afroso will be doing outreach in local schools.

Oftentimes, he said, children think of Africa as one country, rather than the massive and diverse continent that it is.

“I like kids to know that there is more to Africa, because they can learn more if they view it as individual countries,” he said. “Each country has different language, different cultures. There are over 800 languages on the continent of Africa.

Sometimes someone sees me and asks, ‘Do you speak African?’” he continued with a laugh. “Even in Ghana we speak 49 languages, so when I go to the north, I don’t know what they say.”

As Afroso’s passion for music and world cultures shines through in his spirited performances, there’s no doubt that the demands of worldwide touring can be grueling at times. However, the artist wouldn’t have it any other way, telling the Reader that performance is the “only thing” he knows — he sees it as his “calling.”

“I feel like I can also contribute to society — that’s why I’m making it a point to go to places where I can do educational outreach in communities as well, so that I’m not just coming and playing at people and leaving,” he said. “Even though it is a lot of travel, whenever I go to a community and I see how much happiness we are able to have together, it just motivates me to want to keep doing it.”