There may not yet be frost on the pumpkins, but I’ve already picked my tomatoes, made my peace and said farewell to a very windy summer. I can feel that nip in the evening air that says autumn looms, but I feel accomplished that the basil yielded a couple batches of pesto and my Mason jars are packed tight with crispy dill pickles. And I’m grateful that Ryanne’s fresh pressed apple cider fills a shelf in my refrigerator. On and off, for the past 20 years, we’ve reaped the rewards from our sturdy and beloved cider press.

The press originally belonged to our old neighbor Al, the first person we met when we moved here. It was shortly after acquiring (in a weak moment) the nanny goat who just wouldn’t stay put and made her daily break across the road to the old Waldorf School. Upon her arrival, the school secretary would call the sheriff. I had more on my mind than that damn goat: It was my first performance as a single parent in an unfamiliar town with a new, demanding job. The days were long, the money was tight and every single long and lonely night I lay awake, questioning myself and this major life transition.

Looking back, that goat was the best money I ever spent. (Actually, I believe she was free to a good home/unsuspecting sucker). Anyhow, up our common driveway came Al, leading/dragging Nanny towards me with the classic line, “Hey lady, I’ve got your goat.”

He did have my goat, and for the next ten years, a big chunk of my heart as well. We shared meals, holidays and family vacations. By his account, Al had been married two and a half times but sadly was never able to have children. He adored mine and relished his role as honorary grandfather.

Every fall, Al made elaborate plans with Casey and Ryanne and their friends for a cider pressing extravaganza. The younger girls never seemed quite as humiliated and horrified as the high school girls when it came time to gather apples. Just recently, I suggested to Ryanne that the apple picking chores helped her develop character. She corrects me. “I already had character,” she expounds, “and it took a lot of it to stand alongside the Dover Highway picking apples of questionable ownership, dropping them into large garbage cans, and praying Al would return before any of the cool classmates spotted me.” The younger girls were dropped in pairs along Upper and Lower Syringa to reap the fruits from low-hanging branches.

Al would drive the route several times to inspect everyone’s progress. Fear of admonishment kept the team looking real busy and picking for all their worth. When he was satisfied he had enough apples, Al loaded crew and crop in his pickup and headed home with the haul.

We all gathered around his garage, hosing apples and filling jugs. Al was none too particular about the condition of the fruit, so Ryanne and I would skillfully remove the weakest (and wormiest) apples and pitch them when he wasn’t looking. In between pressing apples, Al would entertain us with really corny jokes, and when he knew I needed it, he offered me sage advice and reminded me that “this too shall pass.” And it always did.

Besides the reward of fresh cider, the crown jewel of the action-packed day was a huge pizza party served in Al’s basement party room, filled with pinball, foosball, darts, a pool table, full sized-shuffleboard and 20-year-old soda pop.

Al was a retired aeronautical engineer who made exhaustive daily notes and kept a cider log to rival anyone’s Christmas card list. Armed with his list, 20 or so jugs of cider and his faithful companion, Chester the dog, Al would make the delivery rounds to all his favorite ladies. It was the highlight of his full and colorful life.

For years we kept the press humming and the jugs filled, then Al suffered a devastating stroke. Once we settled him back into his home with caregivers, Casey would race over every afternoon with flashcards and memory games in hand. To no one’s surprise he made a full recovery.

He had another great five years or so until, one day, with tools nearby and Walkman buds in his ears, he laid down for his final nap. Sorting his belongings was poignant: old calendars and lists would highlight important events, like the date he first met Ryanne’s husband, Russ (with glowing approval), Casey’s fish count from a day on the river or how many pizzas it took to feed the “cider crew.”

When Ryanne relocated to Idaho, her first request was for the cider press, collecting dust in an old shed. It’s been back in action for the past five years or so and even the toddler has a hand in helping with this tradition. Taking time for old traditions and creating new ones are the best gifts we can share. This cake is pretty great to pack up and share at a fall outing. If it’s an adult party, replace the cider with hard cider. 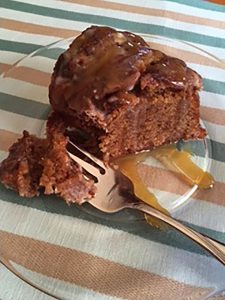 Spiced Apple Cider Bundt Cake
A nice fall dessert that travel well, freezes well and tastes delicious! If you are planning on freezing, save the glaze serving.

Preheat oven to 350. Grease and flour Bundt pan and set aside.

In the bowl of a stand up mixer on medium speed, beat together oil, eggs, brown sugar and sugar until light and fluffy. And applesauce and mix briefly.

Turn the mixer to low, and add in thirds, alternating flour and cider. Beat until combined.

Pour batter into prepared Bundt pan and bake for about 45-50 minutes, until a tester inserted in the center comes out clean.

Cool on rack, then invert onto cake plate before icing.

Combine all ingredients in a small bowl and whisk until smooth. Drizzle over cooled cake.

Drizzle plate with caramel sauce and set the cake slice on top to serve.