A man of the seasons:

Inspiration can be found anywhere, but for acclaimed pianist George Winston, the changing seasons of his native Montana sparked a creative inspiration that has followed him over the past three decades of performing.

We talked with the softspoken piano virtuoso about his upcoming piano concert at the Panida Theater, his early influences, his unique style of rural folk piano and his love for the great New Orleans pianists of old. 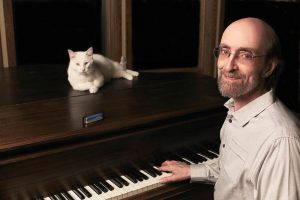 SPR: You grew up in Montana, right? Not too far away from here?

SPR: You seem to be influenced by the changing of seasons. I bet you had a lot of hard winters in Montana.

GW: Yeah, 100 percent of my influence was the seasons. I spent the first 12 years of my life not even listening to music. It was just the seasons. In Miles City, there wasn’t any TV, just one radio station. The seasons were my entertainment. That’s all I knew. Then I started listening to music when I was 12 in 1961. In that year there were 30 instrumentals in the top 40s. I only liked instrumentals. I would turn on the radio five minutes before the news and listen. I also loved the organ. One record I got later was a band with an organ. I’d never heard of them—it was The Doors. I said, “This is the greatest thing I’ve ever heard, I’ve got to get an organ and play in a band.” They spurred me from being a listener to instrumentals and organist to being a player. I started playing at 18 in 1967. Then I heard Fats Waller’s recordings. And I said, “Oh, it’s solo piano, not organ in a band, OK.”

SPR: Did you take any instruction or were you self-taught?

GW: No, not at all, I’m self-taught. I was never interested in European stuff. I had some jazz lessons when I first started from a great pianist, learning chords and music theory, but I wound up not being a jazz player at all … I don’t use written music. Nothing I want to play is on sheet music anyway.

SPR: Some of your biggest influences in the beginning were arrangements, but you primarily play solo.

GW: It never really worked for me to play in a band. I didn’t know there was anything else. I thought piano players went around playing solo in 1967. My main inspiration is the New Orleans pianists. That whole tradition started about 1850. Louis Gottschalk was the first New Orleans piano of the 1850s. He was the first great gumbo pianist mixing influence from classical and the Caribbean. The blues didn’t exist yet. R&B didn’t exist yet. Now, it seems like everything comes from Professor Longhair one way or another. He influenced and inspired everybody.

SPR: When you trace the derivation back, it seems like if you removed one or two key people in every genre of music, you never know what would’ve happened in that genre.

GW: Or less would be recorded and you’d have to find it entirely underground. Ther are certain spike moments. Mine were hearing The Doors, hearing Fats Waller, Professor Longhair, James Booker later. I heard James Booker in 1982 and said, “That’s the way to play the piano.” And it still is.

SPR: For those unfamiliar, you are best known for your folk style piano. What does that mean?

GW: The earlier jazz style from the ‘30s used a lot of stride piano. I wanted something to complement the up-tempo stuff. So I came up with folk piano … It has a real sensibility about it. Stride piano was much more urban.

SPR: One of the greatest parts about music is, no matter how good you get, or how proficient you are in any instrument, there’s never an end to the learning that takes place.

GW: I’m not sure when, but yeah, it’ll be out soon. I also have a Vol. 3 of Vince Guaraldi’s music. I did two volumes of his songs, and this next volume will be called “Bay of Gold.”

SPR: What do you have in store for us at the upcoming Panida show?

GW: The last time I played the Panida in 2012, I played the “Summer” show. Since I’m playing later in September, I’ll be playing the “Winter” show. It’s basically what I regard as autumn and winter type tunes. There will be stride, melodic folk piano, and pieces from the past records, some Vince Guaraldi pieces, some things I haven’t recorded yet.

SPR: What do you think about the sound in the Panida?

GW: It’s really great. It sounds great. I’ve been there I’m not sure how many times, maybe six, seven, eight times over the decades.

SPR: I know a lot of people are excited to have you back.

GW: Also, we ask people to bring cans of food to the show. We’ll be helping the Bonner Community Food Bank with proceeds from the show. We’re all trying to help out and that’s the best way I can.

SPR: Thanks again for taking the time to talk with us, George. Looking forward to the show.

Catch George Winston in concert at the Panida Theater on Friday, Sept. 23 at 8 p.m. Tickets are available for $26.50 at Panida.org, or in advance at Eichardt’s Pub and Eve’s Leaves in Sandpoint. For more information, check out www.GeorgeWinston.com.