A lecture with historian and author Jack Nisbet

The Bonner County History Museum and Friends of Scotchman Peaks Wilderness are proud to present an evening lecture with local historian and author Jack Nisbet on Oct. 1. The topic of the presentation is “The Longest Journey.”

In the fall of 1902, a Welsh farmer happened upon an odd rock perched on a slope above the Willamette River. It turned out to be a meteorite, and the slow unfolding of its story revealed links to Northwest mining, museum politics, human nature and the deep history of the universe. Part of its appeal rests in the slow realization that it is also an ice-rafted erratic that was probably washed downstream through Lake Pend Oreille during the Lake Missoula Floods. 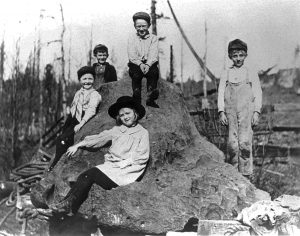 The event will be held at Oden Community Hall, 143 Sunnyside Rd. at 7 p.m. Light refreshments will be served. Admission is free.

Spokane-based teacher and naturalist Jack Nisbet is the author of several books that explore the human and natural history of the Intermountain West, including the story collection “Purple Flat Top” and “Singing Grass Burning Sage,” an illustrated exploration of the flora and fauna of the dry side of the Cascade Range. His essay book “Visible Bones” won awards from the Washington State Library Association and the Seattle Times.

Since 1994, Nisbet has worked extensively on Northwest fur agent and geographer David Thompson, participating in canoe brigades, presentations, four documentary films and a major museum exhibit. He has also produced two books that detail Thompson’s travels and cartography west of the Continental Divide: “Sources of the River” and “The Mapmaker’s Eye.”

Founded in 1972, the Bonner County History Museum has been collecting and preserving the Bonner County region’s significant stories for over 40 years. The Museum is located in view of Lake Pend Oreille in beautiful Lakeview Park. The park has many amenities including picnic areas, a playground, tennis courts and the Native Plant Society arboretum. Adjacent to Lakeview Park is Memorial Field which has a boat launch and is home to the Festival at Sandpoint every August.

The Bonner County History Museum is a 501 (c)3  private nonprofit educational organization. The museum is a membership organization, open to all.  We operate thanks to community support, membership fees, gifts, retail sales and donations, and grants from private foundations.