The Sandpoint Eater: A pie by any name…

Summer has officially arrived, and with a freezer filled with three gallons of rhubarb syrup and a few gallon bags of diced rhubarb, I’m ready. My anticipation of summer in Sandpoint includes lots of food and drink supplies readied for visiting friends and relatives. Other than a trip or two into the woods for morels, my foraging typically involves gleaning rhubarb from generous friends (and word of mouth strangers) and watching for baking ingredient sales that more typically take place in the fall. I turn out fruit pies all summer long, starting with rhubarb and berries, and, as the season grows, so does the bounty, including big, ripe peaches and crisp, tart apples.

Food costs have been on the rise this past year, but I must admit I suffered acute sticker shock when I picked up an eight-ounce box of Minute Tapioca and shelled out five bucks. I can go through an entire box of the stuff on a busy pie making day and luckily thought to look at Miller’s Country Store.  Not only did they carry bulk tapioca at less than half the price, but they have lots of other bulk baking supplies, such as a variety of sugars, flours, and cocoa powder, including black cocoa (add a little to your chocolate cream pie filling). Miller’s is conceptually like the Clark Fork Pantry and Sharon’s Country Store in Bonners Ferry: quaint, Amish-style markets filled with beautiful handmade crafts, wholesome food ingredients, baking supplies and equipment and delicious baked goods. My bulk storage containers are now brimming with enough stock to feed seven hungry grandbabes.

I also hit the jackpot with a local $1.98-a-pound butter sale. At a limit of 2 per customer, let’s just say I made my way to the dairy section of Super One more than a few times last week.

Next on my list of pie supplies is berries, and from the looks of my bushes, I’m expecting a real bumper crop of raspberries (if the grandkids don’t beat me to them). Shingle Mill Blueberry Farm is less than five minutes from my house, and in less than a month—July 15, to be exact—their berries will be ripe for the U-picking.  I’ll be there, with buckets and grandbabes in tow.  Besides blueberries and a passel of their own super cute kids, you’ll also find a variety of plants for sale.

Once frozen in a single layer on sheet pans, I’ll bag up the blueberries in gallon-sized bags and use them for baking scones, muffins and lots of pies.

To me, few scents are as fragrant, and nothing quite as satisfying, as pulling a flaky and golden-crusted fruit pie from the oven. If pie crusts are not your forte (and seem daunting and difficult) you can still fill your oven (and your belly) with many variations of a pie.

There are French, Dutch or Streusel-topped pies (a crumble mixture of flour, sugar and butter), which take the work out of a top crust. Or deep dish pies — no potential soggy bottom crust but lots of filling that can be topped with pie crust, batter or biscuit dough. Depending on where you hail from, you may have been raised on a fruit and pastry creation named Pandowdy, Buckle, Betty or even Grunt.

As much as I love rolling out a good pie crust, when my kids are here, I am a champion of cobblers. Bad enough that Ryanne thinks she can make a better pie crust than her mother, but even my son Zane gets in the act. Several years ago, we had a family friendly apple pie baking competition, which ended in a major feud that included sabotage by fellow bakers and complicity by judges.

You don’t need to attempt an award-winning pie to take advantage of our beautiful local fruits! Choose a recipe and technique that suits your comfort level and start baking! If you’re a novice and feel like you need a little help, you’ll find all kinds of special equipment to turn out a perfect pie, including crust collars, drip shields and pie funnels. While I have more than a half a dozen rolling pins to choose from, Zane is known to roll out a fine crust using a can of soup or whatever is handy in his single-dad-to-four-kids cupboard.

As I began to assemble my ingredients for “Bluebarb Pie,” (named by Zane when he was a small, pie loving towhead), visiting Ryanne followed me around the kitchen, eyeing my ingredients and observing my preparation, hence I hope you’ll enjoy this recipe for Bluebarb Cobbler. Because a pie by any name is pretty darn sweet. 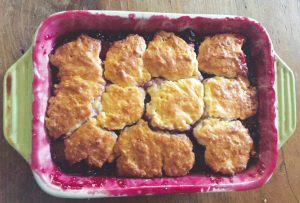 In a large bowl, toss the blueberries and rhubarb with the sugar and tapioca until evenly coated, sprinkle juice and zest over top and toss again. Set aside for up to an hour. Then, pour the filling in a well buttered baking dish (approx 9x11x2).

Make the dough by whisking flour, sugar, baking powder and salt in a large bowl. Cut in the butter using a pastry cutter or your fingers until you have coarse crumbs. Add the cream and gently mix just until it forms a sticky dough; do not over mix. Place large spoonfuls of dough over the fruit in the baking dish.

Bake for about 30 minutes, or until the fruit filling is bubbling and biscuits are puffed and golden. Let cool for about 15 minutes.