Music allows us to view our lives through someone else’s lens, and in the same breath teaches us equally about ourselves as it does the world.

I have used artists — usually strong, artistic women generations older than I am — to serve as beacons of individuality and spirit as I move through life (my most recent obsessions being Pattie Smith, Joan Didion and of course, Joni Mitchell).

My dad was the first person to introduce me to Joni Mitchell. I still remember his tenor voice flying around the cab of his truck, trying to mimic her own wafty vibrato as we listened to “A Case of You,” a raw and unapologetic love ballad:

“Oh, you’re in my blood like holy wine/ You taste so bitter and so sweet/ Oh, I could drink a case of you darling/ And I would still be on my feet.” 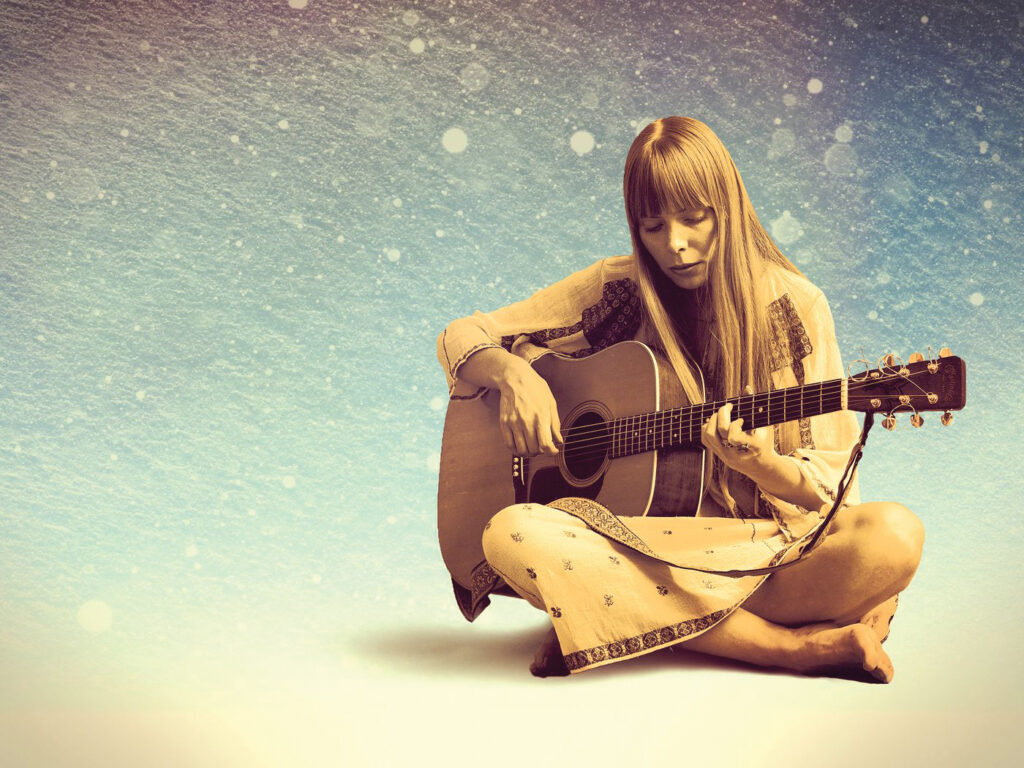 When I decided that Joni Mitchell would be my next muse, I did what was obvious to me: knit hats for every person I love and listen to her entire discography from start to finish, one album at a time.

Mitchell grew up in Saskatchewan, Canada. She was destined to be a risk-taker, as she started smoking cigarettes at age 9 because it made her “feel wise,” according to her extensive online biography. After a tumultuous marriage, a stint in art school and the birth of a child, Mitchell released her debut album when she was 23.

Song to a Seagull sets the bar for Mitchell’s identity as a storyteller. Flowery but distinct language is the vein through which all of her songwriting flows. She is candid in her lyricism and approach; she opens the door with a smile, asks you to take off your shoes and welcomes you into her world:

“Seabird I have seen you fly above the pilings/I am smiling at your circles in the air/ I will come and sit by you while he lies sleeping.”

I didn’t think it was possible to love every single song on an album, until I heard Blue. Unapologetic lyrics, paired with nothing but an acoustic guitar, dulcimer and piano are the essence of what it means to write effectively. Mitchell stated in a Rolling Stone interview that she “felt like a cellophane wrapper on a pack of cigarettes” while writing Blue. The album is sometimes hopeful, sometimes sad, but a testament to the heartbreaking qualities of confessional folk, and always undeniably Joni Mitchell. Today, when I want to feel a little more like myself — or maybe a little more like Joni — I play Blue:

“Everybody’s saying that hell’s the hippest way to go/ Well I don’t think so/ But I’m gonna take a look around it though/ Blue I love you.”

Mitchell’s quirky lyricism and raw backing became the soundtrack to my life, accompanying me on long walks and sitting across the table from me as I had my eggs and toast. Albums such as Mingus and The Hissing of Summer Lawns are highlights of her range of artistry, and the greatest representations of her jazz influences and social commentary about class, society and fame:

“Don’t you get sensitive on me/ ‘Cause I know you’re just too proud/ You couldn’t step outside the boho dance now/ Even if good fortune allowed.”

Hejira, an album written during a cross-country solo road trip in a “hat white” Mercedes, mirrors Blue in its minimal backing and heartfelt storytelling qualities. Listening to Hejira, I feel transported back to the two months I spent alone on the highway in my own hat white Mercedes (*ahem* Toyota 4Runner) — introspective, a little weary, but most importantly, free:

“Listen/ Strains of Benny Goodman/ Coming through the snow and the pinewood trees/ I’m porous with travel fever/ But you know I’m so glad to be on my own.”

As I approached Mitchell’s final album (and my last knitted hat), I heard the final re-recording of her hit “Both Sides Now.” Her first rendition in 1964 was undeniably beautiful, but at age 60, her voice has deepened and become richer over time, and now she’s backed by a chorus of wafty strings rather than her guitar. It feels like 23-year-old Mitchell wrote this song for this exact moment, when she’s finally able to syncopate her fame, loves and losses:

“I’ve looked at love from both sides now/ From give and take, and still somehow/ It’s love’s illusions I recall/ I really don’t know love at all.”

At the culmination of my expedition into her life and work, I realized that the true magic of Joni Mitchell is not hidden in the lengths of her blonde hair or within the notes of her unorthodox chord shapes. She lays all that she is at your feet and doesn’t care whether you like it or not. In short, she doesn’t make me want to be more like her, she makes me want to be more like myself, and I think that is the greatest gift you can give someone — the freedom to be honest.

To learn more about Joni Mitchell and her work, visit jonimitchell.com.