I don’t know about you, but my eyes have been bouncing between the thermometer and the mountains with hopes of jumping into that perfect point on the graph of lake swimability; you know what I’m talking about, where the rising air temperature cancels out the frigidity of the fresh runoff in the lake. 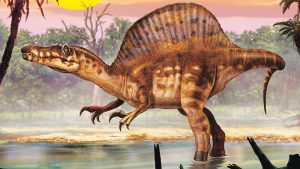 The spinosaurus, cruising for a meal. Courtesy image.

At least for me, we’re not quite there yet.

In the spirit of being too much of a baby to get into large bodies of water, for the next couple of weeks I’d like to showcase some other reasons to avoid the water… if you were swimming in 100 million-year-old lakes!

Ever since 2001’s “Jurassic Park III,” this guy has been a household name: the spinosaurus. As you’ll learn after any amount of reading about dinosaurs, paleontologists aren’t really creative when it comes to names. Spino means spine, for the large spines protruding from the beast’s back, and saurus means lizard.

The spines for which it has been named were believed to have formed a sail on its back, or perhaps a fatty hump like you’d see on a camel. After interacting with as many birds as I have, I personally believe this was a showy sail used for two purposes: To help regulate the Spinosaurus’ body temperature and to flush and attract mates or ward off competitors. Scientists believe the sail may also have acted as a stabilization device while hunting in the water. Unfortunately for us, the sail (or hump, whichever it may have been), wasn’t made entirely of bone and thus didn’t preserve. Until we build a time machine, we may never know for sure what the use and purpose may have been.

Though I mentioned birds, it seems the spinosaurus resembled modern crocodilians, skeletally. It was believed to have mostly inhabited the water, feeding on fish and whatever else was stupid enough to get into lakes and riverways 90 million years ago, but would occasionally rush the shore to snap up any poor saps coming up for a drink. Just like a crocodile.

A 50-foot crocodile with a sail on its back. Yeah, that’s not terrifying at all.

Hey, worked out for us either way. With the dinosaurs out of the way, mammals could flourish and evolve to where we our now.

Dinosaurs had well over 60 million years to get to where we are, and we have yet to find a fossil clutching a DiPhone, so I don’t feel particularly bad for them.

If you’re itching for an awesome dinosaur fight, I won’t disappoint you. If you remember back to Mad About Science’s second article when we talked about crocodiles, I mentioned the sarcosuchus imperator, one of the biggest crocodyliforms to ever waddle about the Earth (reaching up to 39 feet long!). Spinosaurus and sarcosuchus may have shared some time and territory on the planet, which can mean only one thing:

During its lifetime, spinosaurus inhabited northern Africa. While you might think deserts, the Nile and mummies, Africa was a different place 100 million years ago. It was also in a different place 100 million years ago. The continents of Earth have been drifting apart for a very, very long time. Around 220 million years ago, the continents were all smashed together into a supercontinent called Pangaea. In spinosaurus’ time, the continent had started to rift apart, where a second continent had formed in the north called Laurasia that contained North America, Europe and Asia as a singular landmass, and a continent in the south called Gondwanaland that was an amalgam of South America, Africa, with India, Antarctica and Australia separated by a sea channel (but still considered to be part of this giant continent.).

The spinosaurus lived along the northern coast of Gondwanaland, likely in tidal flats and mangrove marshes on the coast of the Tethys Sea, a big channel that partially separated the northern and southern continents.

If you wonder what dinosaurs may have flopped about Lake Pend Oreille during this time, I’m sorry to disappoint you, but the lake wouldn’t exist for a very, very long time. The lakebed wasn’t even formed until the last ice age, about 65 million years after the dinosaurs had gone extinct. You can thank a mix of glaciers and the Missoula floods for the lake. Who knows what this area may have looked like during the spinosaurus’ time? It was certainly devoid of one key feature.

As I wrap up the article, I’d like to focus on what’s left of the spinosaurus’ legacy. It has captivated our hearts and minds, it has given us nightmares and hours of entertainment from subpar movies with awesome premises. What you might not realize is that the history of our understanding of the spinosaurus is pretty limited, and it’s quite sad as to why.

The fossils were discovered in Egypt around World War I. We never found a complete skeleton, which made most of what we discovered to be inferred from similar fossils.

We only scratched the tip of understanding before the conflagration of WWII rocked the world. Unfortunately for everyone, most of the fossils had been found and stored by German archaeologists, whose work became collateral damage in the greatest conflict the world has ever seen.

All we have left are scraps and plaster casts.

Finding more fossils has been a challenge in and of itself. Egypt doesn’t have one of best climates for preserving fossils (the mix of heat, sand and wind is kind of like tossing a gummy bear into a sandblaster), and its history of invasion, civil instability and oil harvest makes looking for and extracting fossils a geopolitical nightmare.

Maybe if the spinosaurus had taken a long vacation to a lakeless, 100 million-year-old Sandpoint, we’d have a few more fossils to add to the global collection.