Mountain bikers planning to ride the Lower Basin downhill trail from the Schweitzer round-about down to the valley in early October might encounter some workers along the trails. 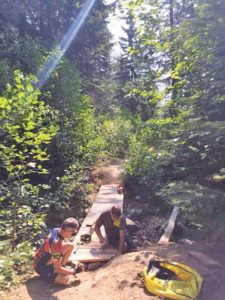 Beginning on Oct. 2, a crew from the Montana Conservation Corps will be rerouting sections of the downhill trail to prevent erosion and make the trail more sustainable, according to Mike Murray, president of the Pend Oreille Pedalers.

The Pend Oreille Pedalers, a local bike club, hired the MCC crew because of concerns that sections of the trail are eroding and may not hold up over time. The club is interested in expanding the trail system in the city’s watershed, but that can only happen if new and existing trails are built in a way that prevents erosion, Murray said.

Erosion can result in sedimentation of streams and degrade water quality, which is unacceptable in the city’s Sand Creek watershed, the drinking water source for Sandpoint and the surrounding communities.

The club also hired a trail design expert to lay out the new sections of trail, which the MCC crew will construct during the two weeks they are here. Schweitzer Mountain Resort is assisting with the project by donating lodging for the work crew.

The Montana Conservation Corps is a non-profit organization that employs AmeriCorps volunteers to carry out conservation projects around the Intermountain West. Another MCC crew was in Sandpoint earlier this year repairing trails at Schweitzer Mountain Resort.

The lower basin trail work is being funded through a grant from the LOR Foundation, and is consistent with the club’s commitment to preserve and improve bicycling in Sandpoint and the northern Panhandle.