It’s that time of the year and ‘tis the season. Some of us will experience a holiday steeped in years of tradition, and some of us will be creating new traditions that may have staying power. For the past seven years, my family’s Christmas Eve has been a Feliz Navidad feast that even José Feliciano would envy.

Our first one was in Rochester, N.Y., where my son-in law Russ had just accepted an academic position, painfully far from family in Idaho. For more than 20 years, our Christmas Eves were filled with savory Swedish meatballs, iced jumbo shrimp, pastry-wrapped ham and international cheeses. Holidays can really bring out the homesickness, and by the time I arrived could sense the melancholy in this little family of three. We decided to forgo our traditional elaborate spread, and since the kids had yet to find a decent Mexican restaurant in the area, they were hungry for some much-missed Joel’s-type food.

By the time Casey arrived to round out our Christmas quintet, the house was decorated, the kitchen filled with fragrant and piquant aromas and the Bûche de Noël replaced by a Tres Leche cake. This was also the year that Russ conceived our now annual winter “Feats of Strength” tournament, which included the cork toss, wall squats and bottled beer guzzling. What I lacked in coordination and strength I made up for in beer guzzling, and was surprised to learn I had a real aptitude for my newly discovered talent. Between our Mexican feast, Olympic-worthy competitions and helping Santa assemble a train table for a toddler, we managed to get through Christmas Eve emotionally unscathed.

Christmas Day was another story. When vegetarian (and non-foodie) Casey discovered Baked Alaska was not a fish entrée, but actually a wonderful dessert filled with cake and ice cream and topped with flames, she had begged for one as our dining finale. My motto has always been “more is better,” and so I made sure to have some Bacardi 151 for the dramatic ignition. The kids’ rental home was an old Victorian duplex with a beautifully carved wooden staircase and a landing with double stairs to the dining room and the kitchen. Russ met me on the landing, out of sight, to douse and light the cake so I could make a dramatic presentation as I descended the sweeping staircase. “Momma,” shouted Casey, “your arms are on fire!” Yes. My arms were on fire, and wow, it felt like eternity before I reached the table with my blazing creation. “My god, Mother, I thought you were going to burn my house down,” scolded Ryanne. The same thought had entered my mind. That I made it to the table with only singed arms was truly the Christmas miracle.

For the remainder of that trip I kept a low profile and refrained from serving any additional flaming foods, especially after Russ threatened to display his collection of “things my mother-in-law has burned.” I think he overreacted, for it was just little things, like oven mitts, tea towels and such…Apparently I’m not the only person who likes a good flambé and who’s had dire pyrotechnic experiences with Bacardi 151, because today the bottle includes a label with five different warnings to avoid using as an ignitor for food or drinks, and it also comes with a flame arrester in the cap (because they just know).

Lucky for me we only spent one Christmas in Rochester. Just seven months later, I drove to the Spokane airport to pick up Ryanne (several months pregnant), two cats and a toddler while Russ drove cross country with an old lab, a young bunny and new jobs awaiting at the University of Idaho. They’ve been teaching at U of I ever since, and each Christmas Eve the tradition we began as displaced Idahoans in Rochester continues as they host a Feliz Navidad not only for family but also for many academic friends, far from their homelands and families. And the winter “Feats of Strength” tournament continues. In fact, I’ve remained undefeated in Moscow, and since many of their friends hail from other countries, I think I’m now considered an International Champion of bottled beer guzzling or something.

Whether you celebrate a Merry Christmas, a Happy Hanukkah or a Joyous Kwanzaa, you’ll love this recipe for Chile Rellenos Casserole—it’s become a signature dish on our Christmas Eve table. Feliz Navidad, friends! 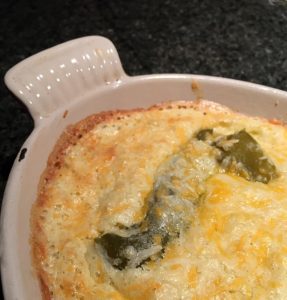 This is great dish that travels well.  You can it ready and refrigerate overnight before baking.
(Be sure and get the large can of green chilies at Yokes, it’s a great value)!

• 1 lb. Monterey Jack cheese, half cut into finger-sized strips and half grated

Whisk egg whites until frothy (do not beat to peaks), set aside.  Beat half and half with egg yolks, flour and half of the green enchilada sauce until smooth.

Dredge cheese fingers in flour, and place one into each chili. Pat chili around the cheese. Mix grated cheeses.

Bake in 350-degree oven about 45 min hours or until cooked and set in center. Cut into squares and serve. Garnish with cilantro or green onions.