Sky House: a warm place at the top of the world

Gorgeous vistas, rugged trails and access to the best skiing for miles: the Schweitzer Mountain summit is already famous for these qualities.

Amenities like a fully stocked bar, sewer and water systems and television service are a bit more unexpected for such an isolated environment. But Schweitzer Mountain Resort’s new Sky House offers that and more, all married to the most enviable views for miles. 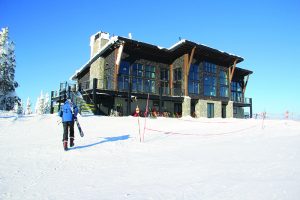 A skier makes his way to the Sky House on Friday. Photo by Ben Olson.

“We know the lodge will become a destination attraction during the summer and winter seasons, providing another reason for outdoor enthusiasts to add Schweitzer to their ‘must visit’ lists,” Schweitzer CEO Tom Chasse said in a press release.

Rustic and brimming with earthy tones, the lodge has the look of a classic mountain getaway. The effort to construct the 9,300-square-foot building, however, was anything but intuitive. When the project was announced last year, architects and engineers faced the daunting task of constructing a luxurious structure at 6,400 feet above sea level without the benefit of existing infrastructure. From the beginning, operations director Bill Williamson, project manager Michael Lusich, architect Tim Boden of Boden Mountain Architecture and engineer Dave Thompson of DGT Engineering had a major challenge on their hands.

“A lot of people will come up here and say, ‘Wow, what a great building!’” said architect Tim Boden. “But building in the city is one thing. Building in Schweitzer Village is another thing. And building on top a 6,400-foot-elevation mountain is yet another thing.”

The first challenge was to establish sewer, water and power systems. According to Tom Trulock, president of Schweitzer Utility Company, the team first investigated the possibility of digging a well to meet water needs. While they did eventually discover a water source, it wasn’t large enough to meet the facility’s needs. Instead, they decided to pump water to a midway station, where they then routed it to a reservoir on the side of the building. The sewer line was constructed to travel in the opposite direction toward Schweitzer Village. Finally, the team used power sources to establish a loop feed, providing electricity to the lodge.

Meanwhile, the engineering team planned the lodge’s structure to endure the rigors of the mountaintop setting. The Sky House uses construction materials and steel bracing tested to endure 120 mph winds, while its heat retention and efficiency standards are more than sufficient to blunt the summit’s most bitterly cold nights.

Schweitzer Mountain officials contracted Sandpoint-based company Idagon to handle construction. According to business co-owner Colin Burnett, it was a chance for Idagon to establish itself as a key presence in regional construction.

“Schweitzer gave us the opportunity to do the type of project traditionally given to a Spokane or Coeur d’Alene outfit, and we’re grateful for that,” he said.

As construction advanced, Burnett said worries grew about whether the project would be completed on schedule. While the weather was mild, the team enjoyed a steady pace. But as autumn deepened, the temperatures dropped, the snow started falling and drivers faced the challenge of trucking materials up hazardous mountain roads.

“Toward the end the weather—the wind, the cold and the rain—really became a problem,” Burnett said.

The worries proved unfounded. Schweitzer introduced the completed Sky House to regional business and media figures last week in a special sneak preview. And the lodge opened to the public this Wednesday right in time for the Christmas crowds. The debut establishes the lodge as a new home for Schweitzer Ski Patrol dispatch, a valuable restroom location for full-bladdered skiers and boarders, a venue for weddings and other events and a foodie destination thanks to The Nest restaurant and the Red Hawk Cafe.

Last week’s event was an opportunity to show off the lodge’s many features. Attendees first gathered in a main dining hall on the second floor, where they were treated to the spectacular summit vistas that dominated the project’s raison d’être. From the beginning, the lodge was planned to maximize this asset, with huge windows dotting every face of the building and outdoor decks offering unique vantage points.

“Just getting above the treeline [of the summit] offers a new perspective on a familiar view,” Boden said.

After the initial socializing, guests proceeded into the bar area for drinks and a sampling of the small-plate dishes from a menu curated by chef Pete Tobin. The wait staff paraded out a series of tempting offerings available at The Nest restaurant, from spicy barbecue chicken wings to baked spaghetti bites to diced potatoes with raclette cheese and bacon bits, while diners enjoyed beer and wine from regional providers.

Indeed, the Sky House is something of a showcase for Sandpoint talent, from the Evans Brothers coffee to the local MickDuff’s and Laughing Dog beer and Pend d’Oreille Winery wine. Locals also benefit from the 30 new jobs added during wintertime operations, according to Chasse. And then there’s the lodge itself: the product of hard work from hundreds of individuals, most of them local.

“Big thanks to Schweitzer for keeping it local and giving us a solid chance,” said Burnett.