If you need to gauge the temperature of the conversation surrounding the proposed $55 million school facilities plant levy, just log in to Facebook.

Ever since the Lake Pend Oreille School District Board decided to seek voter approval for the six-year property tax levy that would rebuild or renovate several aging school buildings, it has been a matter of sharp debate. As the days until the Aug. 30 vote dwindle, the battle lines between supporters and opponents are fixed on social media, and only time will tell whose messaging will persuade voters. 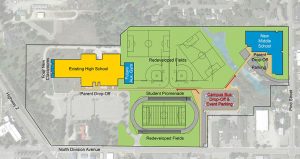 An artistic conception of the scheduled upgrades to the Sandpoint High and Middle Schools. Drawing by ALSC Architects, map by Google.

There’s no question that the facilities plant levy is a big ask. But according to LPOSD Superintendent Shawn Woodward, the proposal is meant to solve an even bigger problem of dilapidated buildings. It was a problem Woodward noticed while touring the schools for the first time during the interview and vetting process prior to his appointment.

“I was very pleased with the academic achievement of the school district but really surprised at the condition of the facilities, and I’m not alone,” said Woodward.

One particular episode of bursting steam pipes at Washington Elementary raised parents’ concerns for the students’ safety and learning experience, Woodward said. It’s just one of the problems attributed to the oldest buildings’ 60-plus year age.

The school board hired an inspection team to review each LPOSD facility’s condition. Members selected Teater Consulting, a team with a professional background in school inspection and no ties to the district, for the job.

“We wanted to find someone with no skin in the game,” Woodward said.

The inspection team concluded that 7 out of the district’s 11 facilities were rated as either “poor” or “unsatisfactory.” Of the many issues noted by the team, the worst-scored schools were cited for failing steam piping and poor ventilation, inadequate roofing for snow loads, damaged doors and windows and deteriorated exteriors.

According to Woodward, the school’s maintenance team has done an admirable job patching up the facilities. However, he believes the buildings have simply reached the end of their expected lifespans. With that in mind, board members approved a levy that would fund as many new facilities as possible within a six-year stretch. According to Woodward, the board opted to fund the project through a levy rather than a bond, which in Idaho requires a super-majority to pass.

“People ask if we chose the funding mechanism because it had a better chance of passing,”  Woodward said. “The answer is yes.”

The board also had to determine whether voting for the levy would take place in May, August or November. According to Woodward, planners didn’t have enough time to hit a May deadline, and scheduling it for November meant delaying construction by a year.

“Once we started turning over stones, we realized there was a sense of urgency on this,” Woodward said.

The most expansive of the renovation projects is Sandpoint Middle School, which earned the lowest score out of all district schools. The school is planned to be rebuilt northeast of Sandpoint High School with expanded space for 675 students. The project also includes room for more gym space and redeveloped fields between the middle and high schools—a somewhat controversial measure, but one needed to complete the project all at once, Woodward said.

“Could we have backed off on some of those ideas?” Woodward added. “Yes, but we also wanted to make sure we listened to stakeholders, and many were saying to do that now.”

Northside Elementary will also be rebuilt. The new plans make way for an increased 180-student capacity. Most of Washington Elementary will require rebuilding, and Clark Fork Junior and Senior High School will receive a new technical career school. The new facilities will be designed to emphasize security and student safety. In addition, other schools will receive selective maintenance, efficiency and safety upgrades.

With so many needs throughout the school district, Woodward said selecting projects to emphasize was a true challenge. In the end, the board prioritized schools serving the most students.

According to Woodward, the school district received cost estimations in line with similarly scaled projects and arrived at a $55 million price point. According to LPOSD projections, a $200,000 home with a homeowner’s exemption has an expected 2017 school levy burden of $184. That would increase to $384 per year should the plant levy pass. The new rate would shift the LPOSD levy on property taxes from well below the state average to slightly above it.

According to Woodward, any money generated through the plant levy will go exclusively to fund facility projects. Despite rumors throughout town and on social media, the levy dollars will not fund salary increases for teachers or administrators. He also assured voters that no other plant levies will be proposed within the six-year period.

Concern over the misinformation is shared by Paul Felter, a retired teacher, superintendent and college professor. Between those who believe the levy will fund salary raises and others who don’t understand the scope of the project, he worries some voters don’t have enough information to make an informed decision. That’s especially true for the retired crowd, some of whom aren’t able to get up-to-date information on the internet.

“There are lots of us that, when we retired, we swore we would never have another computer,” he said.

The sheer cost of the project also adds up to a painful decision for many homeowners, especially those living on fixed incomes. While many like Felter want to support schools, they’re cognizant of the difficulty many will have finding a few extra hundred dollars in their budgets.

“I think [the district has] bitten off more than it can chew,” Felter said. “When you go for $55 million with the wages available in this town, you’re shooting yourself in the foot.”

Until the Aug. 30 vote, Woodward said he will stay busy meeting with voters and answering as many questions as he can. While he said he understands critics’ concerns, he believes the plant levy is the most fiscally responsible means to tackle necessary school improvements.

“My task, really, when I was hired was to ensure that we had the best, most optimal learning environment for our students,” Woodward said. “That’s what we’re trying to do.”