Sandpoint city councilors unanimously approved a code amendment March 16, replacing existing construction setbacks along Sand Creek with a new section that prohibits building within 25 feet of the high water mark, requires a vegetative buffer or engineered stormwater treatment system as necessary, permits before any dirt can be turned along the creek, and greater coordination with state and federal agencies regarding impacts to the watercourse. 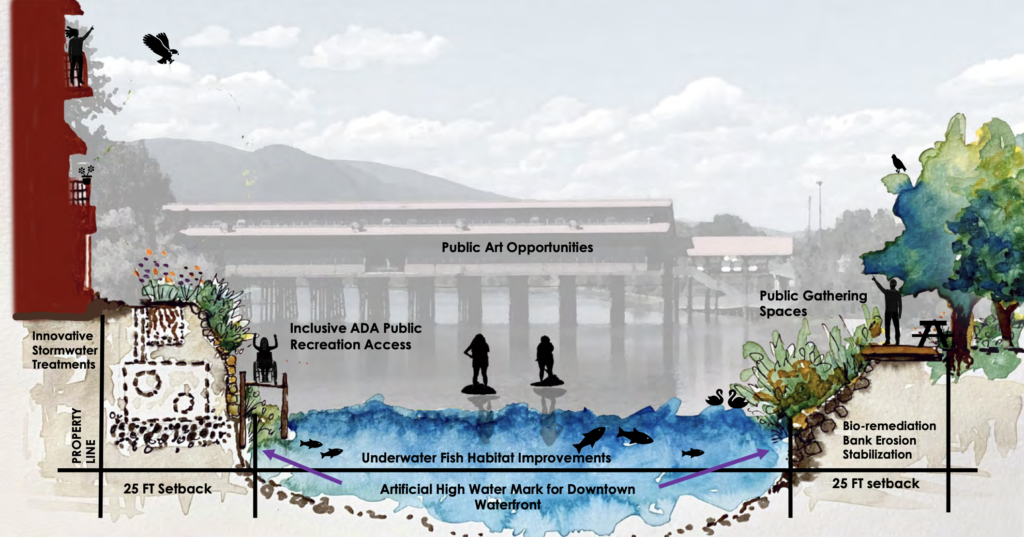 The code amendment has spurred months of public feedback since it first came before the Planning and Zoning Commission in September, with many residents concerned that it would open the way for “overdevelopment” on the creekside. It has since been tabled, recommended for denial by P&Z, and subjected to workshops and stakeholder meetings.

City staff explained that the amendment had become necessary during preliminary implementation of the phase of the Farmin’s Landing project, as described in the “downtown waterfront” component of the 2020 Parks and Recreation Master Plan. That portion of the plan calls for stormwater treatment along the creek but also an array of public amenities, including a plaza and other public gathering places.

Those elements of the master plan wouldn’t be possible under current code, which sparked a months-long process of revising the code amendment to allow “structures” such as patios to be constructed within the setback, but subject “buildings” to permitting or a conditional use permit at least, and prohibition at most.

“At no point was this code change about allowing private development to build into the creek,” Infrastructure and Development Director Amanda Wilson said in February. “That was in no way, shape or form how this started.”

The code change would apply to public and private property in the Commercial A and B zones along Sand Creek as far north as Highway 200 and the Popsicle Bridge.

Councilor Jason Welker, who served as chair of the P&Z Commission when the code amendment first surfaced in September, emphasized that its earlier incarnation would have allowed building right up to the high water mark, while the version before the council March 16 was actually a stronger protection against overdevelopment than current code.

Addressing citizens opposed to the code amendment, he said, “I believe your concerns about the overdevelopment of our downtown waterfront are warranted. It is highly likely that nearly the entire commercial waterfront between Bridge Street and Cedar Street will be sold, demolished and rebuilt in the next 10 years. The same could happen south of Bridge Street.”

However, he added, rejecting the code change would “do nothing to halt the development of downtown Sandpoint — it will only allow that development to take place with less citizen oversight, less protection for water quality and less guarantee that public access to Sand Creek will be maintained, much less improved.”

Testimony ran either against approval of the amendment or centered on pleas that the council take more time to incorporate provisions incentivizing public access amid future development.

Chase Youngdahl, of Sandpoint, said that because the city’s Comprehensive Plan hasn’t been fully updated since 2009, establishing new code requirements on Sand Creek was “putting the horse before the cart.”

What’s more, he questioned whether the emphasis on public gathering spaces on the waterfront really upheld the spirit of the community’s stated desire to support downtown and preserve its small-town feel.

“It seems like it’s almost trying to capture the big city vibe of Venice, Italy, or the San Antonio River Walk,” he said. “It works counter to the small-town feel.”

Sandpoint resident Pam Duquette said she was concerned about allowing any structures within the 25-foot setback, whether through a conditional use permit or not.

“I think that it will start a precedent for other encroaching developments along Sand Creek,” she said.

Patty Shook, of Sandpoint, worried that she would no longer be able to access the Sand Creek bike path through the current Gunning’s Alley parking area, but more so expressed her concern that Sand Creek would become even more inviting to motorized boat traffic with increased moorage — adding to water pollution and erosion — and that that the future of the waterfront will include luxury high-rise condos along the creek and downtown core.

“We want to keep Sandpoint sweet,” she said.

Steve Holt, of the Lake Pend Oreille Waterkeeper, said he appreciated the work put into the amendment by staff over the past several months and that his organization supported it. However, he said it needs a few additional changes — particularly in the area of incentivizing public access as development inevitably occurs along the creekside.

Molly McCahon of the Lakes Commission came out directly against the amendment, saying, “It is currently lacking clarity, purpose and teeth.”

Echoing Youngdahl’s comments, she said the code change “put the cart before the horse,” and that the city’s stormwater ordinance should first be rewritten and strengthened. She also questioned the conditional use permit process as a safeguard against overdevelopment, noting that often the standards for approval are “very subjective.”

“This is the opportunity to look at Sand Creek realistically and plan for the future,” McCahon said.

After the close of the public hearing, Councilor Joel Aispuro asked, “What’s the rush? Is there something I’m missing here? Is there an immediate need to push this or consider the concerns expressed here?”

City Administrator Jennifer Stapleton said that there is some urgency in that the budget for design of Farmin’s Landing, as well as related stormwater management, has already been approved by the council and the limbo in which the code amendment has lay for the past several months is delaying the project — “including a bank stabilization project that’s depending on that.”

Wilson added that focusing on the stormwater ordinance first would add months, maybe years, to the process of revising the Sand Creek code change. In the meantime, the existing code leaves the waterfront open to even more intrusive development.

“Our hope is that this ordinance buys us some time,” she said. “I think it’s a short-term improvement. … This isn’t going to be the ‘forever code.’”

Welker doubled down on his point that putting the amendment in place now actually ensures more protection for the creek, considering that current rules don’t require a vegetative buffer, nor any kind of stormwater mitigation.

“Current code doesn’t do anything,” he said, adding later, “This is a temporary stop-gap to make sure the development that does happen goes through a more rigorous public process.”