Mad About Science: The Fifties

So, it seems like as good a time as ever to take a trip down memory lane and see what made the ‘50s so unique.

To really make sense of it all, you have to look just a little further back than the ‘50s. Just five years before the start of the famous decade, mankind concluded what could be considered the most visceral and destructive conflict the world had yet seen: World War II. I can’t even begin to imagine the ways it must have changed so many communities on either side of the pond. 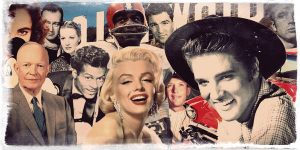 But the conflicts of WWII didn’t end when the Axis fell. A new beast rose from the ashes of a pivotal ally, one that would forever change the course of human, and especially American history: Stalin’s Soviet Union.

Much of the nostalgic value comes from the idea of a simpler time, where American values were clearly cut and defined by conservative and religious ideals.

The origins of this seemingly universal mindset can be explained by three words: the Cold War.

The spread of ideological communism from the Soviet Union threatened many layers of American life. Labor unions were perceived as communist enterprises as far back as the ‘20s; they directly threatened the bottom line of wealthy business owners, which affected the taxable income of the United States and strained the friendships of several high-profile politicians. The threat of communism made for a convenient boogeyman, a target to create fear that made groups of people easier to rally and control. Simple American values versus the Red Scourge made for a very clean-cut good versus evil image that seemed to define much of the decade, culturally.

Not everything was so clean-cut, however. Much of what made the ‘50s so great was the explosion of counterculture that perturbed adults from coast to coast. The rise of rock n’ roll, with roots in southern African American musical communities was brought into the mainstream by heartthrobs like Elvis Presley. Later into the ‘50s, you saw the emergence of the Greasers, the rebellious youth that acted as harbingers of social rebellion in decades to follow: The Civil Rights movement, the Vietnam protests, the student riots and the challenges to authoritarianism.

A mixture of injustice in the south, a quietly oppressive government and affordable college for the a young generation sick of being told what to do and who to be afraid of would make for one heck of a tinderbox near the end of the decade, and into the ‘60s.

Perhaps what we remember most fondly of the ‘50s, and what we celebrate the most every year is the cars. The ‘50s had some awesome cars, and they were more easily obtainable since the middle class was growing, especially in the auto industry. Cadillacs were a staple, with their cool space-shippy chromed out vibe. Entering the Atomic Era, I don’t doubt that Americans felt they were entering a new and exciting age of technology and wanted their everyday lives to reflect that. The Space Race was beginning, and everyone wanted to be a part of it. Why not own your own rocket ship if you could?

I think the sleek designs and muscle car engines may have served two purposes. Development of the interstate was ramping up. You could zip on through several cities in a day without hitting a single stoplight. To do this, your car needed to go fast. To go fast, your car needed to be aerodynamic and powerful. Why not kill two birds with one hotrod?

I didn’t live through this era, not even close, though my grandfather always spoke very fondly of it, and I always thought it would be really cool to get to see it.

I guess I’m going to have to settle for grilled burgers, dogs, throngs of people and roaring cars older than I am!