Why I collect antique typewriters

My dad kept a small office upstairs in an alcove outside my childhood room in Westmond. From his ornate roll-top desk, dad would type correspondence on his typewriter, filling our log home with the pleasant sound of clacking keys on onion skin paper. This sound, along with my mom’s sewing machine, was often what lulled me to sleep in those days of yore.

Occasionally — when dad wasn’t home, of course — my sisters and I would play on the typewriter, reveling at the tactile gratification each time a typebar thumped down and stamped a letter on the page. 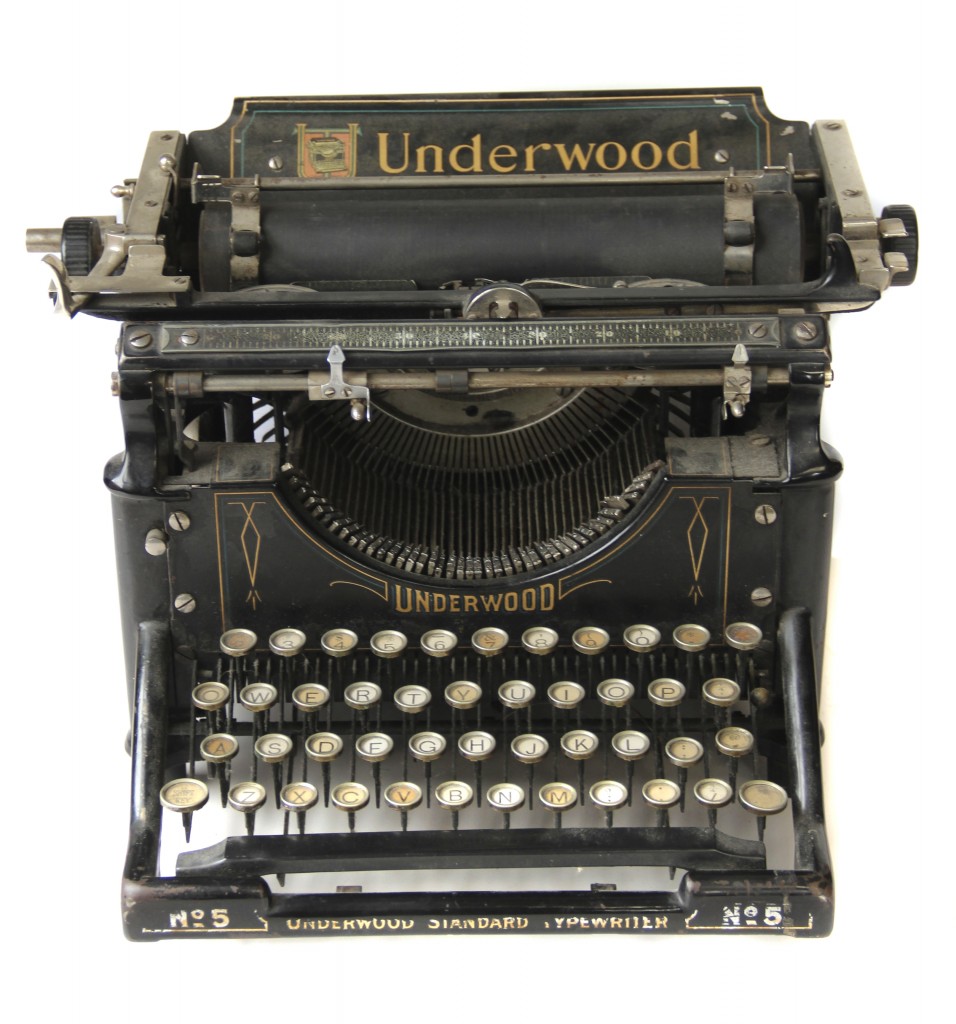 As I grew older and the computer began taking over life as we know it, typewriters went out of fashion. They once filled every office building with a cacophony of blissful noise — that visceral sound of work — but now were graduated to thrift store counters and yard sales, often priced at a buck just so their owners could be rid of the 40 pounds of metal.

After I fled college to become a fledgling writer in my early 20s, I filled Moleskine notebooks with scenes and descriptions of my varied adventures, later transferring the good stuff to a laptop. I found there was a meditative quality to writing longhand. A fast typer can type almost as fast as they can think on a laptop, but longhand requires a slower, more methodical pace.

The problem with longhand was that my handwriting was atrocious. It didn’t help that I was usually writing while hitchhiking in the back of a pickup or slumped against some brick wall in the wee hours of the morning, waxing poetic about how the street lamps shone off the wet pavement.

I also couldn’t write for long periods of time without getting a hand cramp. I had an old typewriter laying around — a Smith-Corona from the ’80s that I picked up at a thrift store — so I closed the laptop and started using that to transcribe my notebooks. I fell into the rhythm that every typewriter sings. Thwack, thwack, thwack sang the keys. Cu-chunk went the shift key. Ding and shzzzzzzt-THUNK as I pushed the carriage back home for the next line.

It was as if a rare flower had opened before me. Finally I had found a way not just to type on a keyboard, but punch the keys onto the page and listen as they were embedded into the physical world. Writing was no longer a pondering activity, but physical exertion. It was almost as if the small task of hunting each key and returning the carriage allowed my mind to achieve a finer focus.

Somewhere along the way, I began collecting old typewriters — not because I needed them or wanted to use them, but because I felt like they were misfit toys that had been banished to the attic. I’d see a blue Royal beneath a stack of baseball mitts at the thrift store bearing a price tag of $4. Done. I’d clean out someone’s garage and find a dusty old Underwood. Sure, I’ll take it home.

They began to pile up, these veterans of work. I found an Underwood No. 5 for sale for $10 at a yard sale and it typed like fine jazz. Another time, I found a twin to my original Smith-Corona, so I bought it just in case I needed the parts. Some of my friends knew that I had an affinity for these machines, so they often gifted me their typewriters, probably happy to free themselves some shelf space. I took them all as they came.

The only time I actually spent any real money on a typewriter was when I found a 1924 Underwood portable at an antique store in Coeur d’Alene. It was $90 and I agonized over the decision while my partner shopped, finally splurging and buying the thing. It now sits on my desk at the office, holding my mail and occasionally tapping out a thank you note to our wonderful readers who send us mail. Best $90 I ever spent.

There is a pace to a typewriter that I understand. Words are not just portions of a sentence, but a victory as each letter is punched ceremoniously onto the page. When you really get going on a typewriter, it’s a noisy affair, full of metallic chunks and dings and grunts as you wrestle the prose into submission line by line, page by page.

One of my best typewriter memories involved a crazed 13-hour writing session that culminated in a play that I produced on the Panida main stage a decade ago. The play, Death of a Small Town in the West, was a dark satire that began as a failed novel. It was one of the many files I lugged around with me inside the laptop that never really went anywhere.

One night, fueled by cheap beer and hubris, I lugged out my Smith-Corona and fed a sheet into the carriage. I began typing the failed novel into a play. I’d never written a play before. I had never really seen that many plays before, but that didn’t stop me.

I typed through the night, sweating and drinking beer as the moths flapped at the window panes. I stopped only to use the bathroom and get more beer from the fridge. Somewhere after sunrise, I came to, realizing that I was writing the last scene. I was finishing something. I wrote those elusive words, “THE END” and sat back in my chair with utter exhaustion. I felt as if I’d just gone 10 rounds with someone far out of my weight class and beat the snot out of them.

There on the desk before me sat the fruits of my labor, a stack of ratty typewritten pages that had taken 13 hours to produce. It was one of the best feelings in my life as a writer — not only did I finish a play, but I had done it almost automatically, as if the typewriter was drawing each finger to the keys. I was just along for the ride.

I love the feel of the keys in my fingers, the gangly thin metal arms that lead to the letter punches. I love the attention to detail each machine was given, and how they can go 100 years without moving an inch and fire right up with a little elbow grease. No power needed, no sterile blue glow of a computer screen. Just a writer and his machine taking the punches, turning them into a song.