Profiles of the Redoubt: Sean Statham

Sean Statham grew up and went to school in Boise. Seven or eight years ago, Statham and his wife came to the decision that Boise wasn’t working for them anymore. 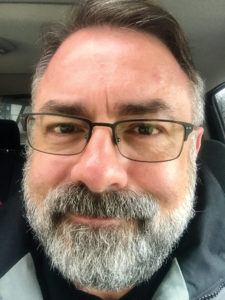 “We were tired of the desert,” he said. “I don’t love the summers down there.”

Statham was originally born in Oregon, and his wife is from West Virginia and Tennessee. He said a motivating factor for leaving was to find a place that had more trees, shade and water.

“We did a little research and looked at other areas of the Northwest where I could make a good income as a business analyst,” said Statham. “We looked at Portland, Eugene, Salem… but we also felt like we wanted a place with a smaller population.”

Part of Statham’s research came from reading the writings of James Wesley, Rawles – the author of several books and caretaker of survivalblog.com, where one of his essays helped launch the idea of the Redoubt movement.

“I’d read an awful lot of Rawles,” said Statham. “I really enjoyed his fiction. Post-apocalyptic is a favorite genre of mine. I was aware of his website and the kind of things he teaches and why he loves this whole area.”

Statham said the factors that influenced his moving to the Northwest were mostly aligned with those that Rawles lauded on his website and writings – that the Northwest was a region with lower population and an abundance of water.

“If power went out, Boise is a desert,” said Statham. “Water is not going to flow. We were also living in a subdivision. Life was really easy … too easy.”

The fact that Statham had close friends living in Cocolalla was enough to convince him and his wife to make the move north where Statham found work at Coldwater Creek.

The couple moved into a place north of Sandpoint and began practicing self-reliance.

“We’ve always kept a backup supply of several months worth of food,” he said. “We have redundant means of purifying water and filtering it. While we have an electric well pump that serves the house, it also has a manual pump jack that we could use to pump water into buckets. We also have a creek in the backyard.”

Statham is on grid electric power, has central propane heating and connection via phone and internet, but he also has wood-fire heating and backup systems in case of any power failures.

“I don’t think it’s likely that our grid is going to go down,” he said. “It’s possible, though, and the consequences … ‘catastrophic’ doesn’t even come close to describing it.”

Hailing from the urban area of Boise, Statham found that he and his wife had to learn new methods and life skills to adapt to their new rural environment.

“There’s a pretty large divide between urban and rural people,” he said. “(Urbanites) have lived in town all their lives and haven’t had to rely on those skills as much. … (Rural) skill and knowledge has been passed on from generation to generation. I don’t think you can live in the country without intelligence and developed skills. … But that goes the other way, too. Rural people have no knowledge of urban skills in the city. It’s setting us up into two different subcultures, and we often don’t understand each other on the other side of the divide. There’s demonization in both directions.”

As a former Army intelligence officer — four years active, two years with the Reserve — Statham acknowledges that soldiers are trained to stay in tune with current events, and to also vet their news sources accordingly, a task that is becoming increasingly more difficult. He understands the power and necessity of an independent media, but notes that the media habits have changed in recent years.

“Journalism has suffered from the pressures of money,” he said. “The news is not there to sell ads, it’s a public service. The Fourth Estate serves an important part of our system. Obviously that’s changed. Some of the most successful media outlets that have drawn the most people have the deepest agendas. How do we relearn critical thinking? How do we teach our children to not take things at face value? The first thing is to identify the echo chamber and stop consuming information from outlets that are skewed. I don’t need any reinforcement for my beliefs. I want objective information.”

It was the Reader’s stated aim to remain objective during this series on the Redoubt movement that influenced Statham to contact the editors and agree to an interview.

“I was impressed by the statement that you were going to do your best to be objective and show fair representation of the movement, although I don’t know if we’re even members of a movement,” said Statham. “I know the term ‘like-minded people’ gets bandied about a lot. Sometimes that’s a dog whistle for things related to race or religion.”

Statham acknowledged that while he identifies with the Redoubt movement in terms of self-reliance and geographic relocation to areas with lesser population and better living conditions, his political and religious views differ from what he considers the norm of the Redoubt.

“My views tend to lean left somewhat,” he said. “Although they have been moderated more toward the center with age. I do have a military background, which colors my thinking. … I have a lot of friends that are dyed in the wool conservatives. I’ve been drawn to people who think differently because it’s more interesting.”

As far as religion goes, Statham said it wasn’t a “big factor for the move. I won’t discuss what faith I adhere to, but it’s one of the larger ones.”

When it comes to the Redoubt movement, Statham follows the happenings, but also recognizes that it’s not any organized type of movement, but more a philosophy that some agree with.

“There aren’t any meetings,” he said. “We don’t go to monthly meetings of the Redoubt chapter or anything. I haven’t really met a whole lot of people where we pass the secret Redoubt handshake before.”

One of Statham’s most pressing issues today is the polarization of the country and identity politics.

“You’re either this or that,” he said. “That’s always been there, but it’s something that has been increasing the better part of my life. Trump’s entrance onto the world stage is enormously polarizing. I’ve been interested in politics since I was a little kid, but it really feels different now. There’s an atmosphere around our politics that I haven’t seen before. I’ve had to make my political views as off limits as possible. I try to keep my mouth shut and filter my more strident views and only share with a small amount of people.”

Statham doesn’t necessarily believe there is a big influx of right-leaning individuals coming to North Idaho: “I think the right has a strong foothold in North Idaho, but it’s not the only worldview that’s represented.”

When asked whether race has had any impact on the Redoubt movement, Statham believes it has not.

“I think we’re in an environment now where a lot more people are comfortable expressing views that not long ago were not welcome in polite society,” he said. “But as far as the Redoubt bringing an increased concentration of racists to North Idaho, I think those people are everywhere. I think they’re louder now, but I don’t think that’s why most people are here. They’re here because of families or any number of other reasons. I’d like to think that racism as a motive for coming here is a pretty small slice of the pie.”

When asked his thoughts on the elected representatives that come from North Idaho, Statham said, “I don’t think they’re all that bright, to be quite blunt. They take the easy, lazy road, pandering to not the best parts of us.”

For those interested in the Redoubt movement, Statham said the best advice is not to jump in over your head in the beginning.

“If you’re motivated by the whole Redoubt movement mindset, start small,” he said. “Start with research. Don’t go buy five pallets of MREs. Do a lot of research before you start tilting your whole lifestyle. Try to find people who live in the way you want to live. There are all kinds of forums online. Most are not what you’d call ‘preppers.’ That’s just how they live.

“Do a lot of research before you start tilting your whole lifestyle.”