Washington state Rep. Matt Shea is pushing back against criticism of a manifesto entitled “Biblical Basis for War.”

In the manifesto, Shea advocates for the killing of all enemy males who disregard biblical law and refuse to yield. While it calls for avoiding bloodshed if possible, it also mandates that war be circumvented only if a would-be enemy agrees to obey biblical law and abolish same-sex marriage, abortions, idolatry, occultism and communism. 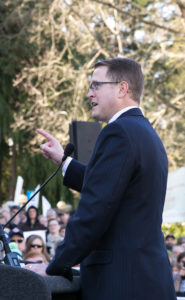 March for Life Rally at the Washington State Capitol in Olympia, January 20, 2015.

In a Facebook Live video, Shea blasted critics for using the manifesto against him, asserting that it was in no way a secret document. He also pushed back against a recent Rolling Stone profile of him, saying that it was written with a leftist spin whenever possible. He claims it’s all a part of a “counter-state” plot by Marxists and Islamists to stymie his conservative-Christian agenda.

“It’s election time, and like clockwork, they are going do the smears and slander and innuendo and implication,” he said in the video.

While Shea says the manifesto isn’t an extremist document, his critics are unconvinced. According to the Spokesman-Review, Spokane County Sheriff Ozzie Knezovich obtained the document about six weeks ago and forwarded it to the FBI. Knezovich is engaged in a longstanding public feud with Shea, which culminated in the state lawmaker claiming that a sheriff’s deputy gun is linked to a triple homicide. The deputy sued Shea for defamation in a lawsuit that is still under way.

“The document Mr. Shea wrote is not a Sunday school project or an academic study,” Knezovich told the Spokesman-Review in an email. “It is a ‘how to’ manual consistent with the ideology and operating philosophy of the Christian Identity/Aryan Nations movement and the Redoubt movement of the 1990s.”

An ideological ally of regional politicians like District 1 Idaho Rep. Heather Scott, Shea is known for a political philosophy heavily influenced by libertarian and fundamentalist Christian thought. He has been outspoken throughout his political career against same-sex marriage and abortion. In 2014 and 2016, Shea traveled to Nevada and the Malheur Reservation in Oregon to support the Bundy standoff against the federal government.

Shea is also an advocate for the creation of a 51st state called Liberty, which would be comprised of Washington’s 20 eastern counties and rely on an agriculture- and natural resource-based economy. Shea argues that eastern Washington shares few cultural and political values with the more liberal coastal half of the state, which is largely defined by the Seattle region.