‘Giving Thanks’: The 6th annual Thanksgiving concert by the Shook Twins at the Panida Theater

Katelyn and Laurie Shook have a lot to be thankful for. For the sixth year in a row, Sandpoint’s own Shook Twins have returned to their hometown to show some love to those who have helped launch them into a career of music that only keeps getting better. 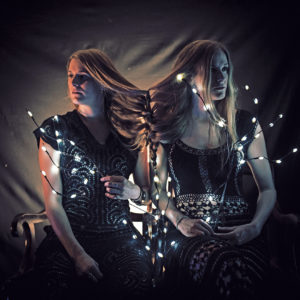 Katelyn and Laurie Shook, as photographed by Jessie McCall.

This year’s concert, titled Shook Twins & Friends “Giving Thanks,” will take place on the main stage of the Panida Theater on Saturday, Nov. 25. The doors open at 6:30 p.m., and the show begins at 7:30 p.m. Tickets are available for purchase at Eichardt’s Pub, Pedro’s, at the door or online at BrownPaperTickets.com and Panida.org for $20 plus tax.

The indie folk pop group is spearheaded by Katelyn and Laurie Shook, who were born and raised in Sandpoint. If forced to sum up Shook Twins into a single word, it would be “versatile.” The five-piece band features a dynamic mix of sounds and styles that harmonize almost as beautifully as the twins themselves.

Band member Niko Slice adds his signature flair to the group, with electric guitar, mandolin and vocal work. Slice also lends his own strange and beautiful songs to the mix, giving the group another twist of style. Barra Brown holds down the drums, vocals and drum pads, and Josh Simon’s bass work rounds out a full, enthusiastic live performance you have to see to appreciate.

While the twins live in Portland, Ore. and spend a good portion of their time touring around the country, Sandpoint is always a welcome stop during the holidays to reconnect with friends and family.

At every holiday show, Shook Twins invite some special guests to share the main stage with them. This year, longtime collaborator and friend John Craigie will play, along with Marshall McLean and his band.

The Shooks are excited to return home after coming off a coast to coast tour.

“We went all the way across the country, Portland to Portland,” said Laurie Shook. “We got to do a couple of cool little festivals, officially became friends with Ani DiFranco, sang with her and sat in. It was so cool.”

The pair have also recorded a new side album without the band as another twist to the story.

“We got a new manager recently, which is cool,” said Laurie. “It was his idea to do a duo EP, to do it simple and stripped down. We’ve never done that before.”

Katelyn and Laurie were honored to work with producer Mike Coykendall, who has produced a lot of amazing albums including M. Ward’s “Transfiguration of Vincent.”

“We just went into his living room and played live and he recorded to tape,” said Laurie. “It was really simple, we kept it really straightforward. We’re pretty excited about it.”

The EP is titled “Two” and is available for purchase online. It can also be streamed on Spotify.

The group also has a full-length album ready to drop at some point in the near future, which will be their first studio album since 2014’s “What We Do.”

“We’re feeling like we have more connections in this world,” said Laurie. “Hopefully that will help us get a record label. We just wrote two new songs that will be on there, too. We’ve finished tracking, and it’s all mixed.”

Bart Budwig mixed the forthcoming album, and will also join the twins on stage at the Panida.

The Shook Twins have shared the stage with award-winning artists all across the country, including Ryan Adams, Gregory Alan Isakov, Mason Jennings, Blitzen Trapper, David Grisman, Laura Viers, The Fruit Bats, The Indigo Girls and many more.

Each year, Shook Twins donate a portion of their proceeds from the Panida shows to a worthy cause. This year, they’ll be donating all merchandise proceeds to Puerto Rico.

“Every year when we do this, we want to give back to something and give thanks for what we have,” said Laurie. “Last year we gave to Standing Rock. We’ve actually been trying to find a charity to donate to consistently.”

This year will see a bit of a change of direction for the identical twins, with Katelyn planning to move back to Sandpoint for the winter to be closer to her boyfriend, Kyle.

“This is going to be the first time we haven’t officially lived in the same place,” said Laurie. “We spend so much time together, every time we’re apart, we get back together and have so much to share with each other. I’m going to put a lot of intention to write some new songs.”

To hear the Shook Twins for yourselves, check them out on Spotify or www.shooktwins.com.