Let’s face the facts, here. You’ll be hard-pressed to find anyone that can seriously proclaim:”I hate ducks!”

Even if you hunt them, you don’t hate them. You probably actually really love being able to hunt them. Heck, you probably love eating them! 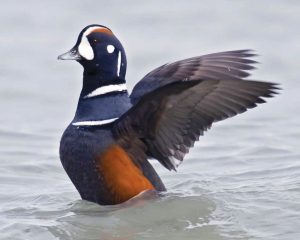 A harlequin duck taking off from the water. Commons photo.

Domesticated ducks are some of the most lovable and goofy animals in the world. They’re not particularly intelligent, they’re about as graceful as a blindfolded toddler and just as loud to boot. Wild ducks, on the other hand, are generally the exact opposite.

If you spotted some adorable ducklings this year and thought to yourself:”They’re so cute! I bet they’re just as easy to raise as baby chicks,” I’d like to welcome you to the aftermath. Congratulations, you survived!

But now you have a bunch of loud-mouthed, filthy heathens swiftly outgrowing their box. What now?

Let’s get your ducks in a row.

First, it’s good to know the breed of your duck. Most domesticated ducks are related to the mallard, the classic duck-with-a-green-head you think of when you imagine a duck. Worth noting, only the male mallards get the green heads, and they will usually only have this bright plumage during certain times of the year, otherwise they look brown and camouflaged much like the females. This variety comes in all shapes and sizes, including bantams and call ducks, which can be as small as one-third the size of your standard duck.

There is another breed of domesticated duck, an exotic-looking fellow called the muscovy. Muskie ducks have odd pink or red growths all over their faces and look like some sort of weird alien bird. They’re also really good at flying and roost like chickens. They’re very quiet in contrast to mallard breeds, usually making weird raspy hissing noises.

If you have four ducks right now, but would like eight ducks down the road, it’s important for you to know how to sex your ducks. Male ducks, or drakes, aren’t as flamboyant as roosters. In fact, a male duck can be virtually indistinguishable from a female.

Luckily for us, nature left us a few clues to determine their gender.

In mallard breeds, there are two obvious signs of a drake after about three months. The drake will have something called a drake feather on his tail, which makes a funky little curl near the end of his butt. Sometimes this feather gets damaged or goes missing, so there’s a second way to find out without having to wrestle him. Hens make a loud quack. Trust me, their voices are booming, and yes, they do echo. Drakes on the other hand, are very quiet. They make a quacking noise, but it sounds like a raspy whisper. You can’t even hear it over a hen if you house them together.

Ducks are waterfowl, and trust me when I say they don’t just call them that for fun. They love the water, and they could stay in it just about all day if you let them.

If you don’t have a pond, fear not! A kiddie pool works pretty well, too. The bigger the space, the more happy they’ll be, especially if you have more than a half-dozen of them.

It’s definitely worth noting, you don’t want them swimming around in the place you get your house water from. Wild ducks are believed to be mostly at fault for spreading influenza during flu season, as they poop while they fly, and the virus tags along, dropping and propagating in any water source it happens to splash down in. Salmonella also lives in their gut, helping them digest their food in the way that E.Coli strains help us digest ours.

If you like eggs, but are allergic to chicken eggs, duck eggs make a great alternative. I mean, if you’re deathly allergic, like Purple-Wedding-Joffrey allergic, I wouldn’t recommend trying it. At the very least, talk to your doctor before considering it. You can’t say I didn’t warn ya’!

Duck eggs are bigger than chicken eggs. They’ve also got more fats and nutrients in them. Because of their fat content, they’re a pastry chef’s dream. They make the dough very light and fluffy, and you also don’t need to use as many as you would with chickens. The taste is different from a chicken egg, however. If you plan on omelets, plan to add salt and pepper.

Since they don’t lay as frequently as chickens, duck eggs cost more. Don’t be surprised to pay well over $5-6 a dozen.

Despite having lived here for forever-and-a-half, I was shocked to find out just how many species of ducks call our area home.

Over 30 waterfowl species call Idaho home, including the beautiful harlequin duck and the wood duck. I’m pretty sure the hunters are shooting at Mallards in the fall, but if I’m wrong, feel free to correct me. I’d love to know more about what’s flying around my proverbial backyard, and so would the rest of the area, I’m sure!

You’ve endured my rambling so far, but the one paramount question burning at the core of your very being has yet to be answered. I can feel it, the curiosity just crawling free and screaming into the cosmos.

The famous insurance duck is a white pekin. Maybe it could be considered a white layer or a white duclair, but I think Pekin is much more likely.

If you happen to be a meme savant of the internet, and you’re now questioning the validity of the once-famous “Afro Duck” I can assure you no, it was not photoshopped. Afro ducks are a thing, and they are completely hilarious. The proper terminology is “crested duck”, and it comes from a gene mutation that can happen in about 25 percent of birds with a crested parent. One of the most popular waterfowl on the market is the crested cayuga, a solid black duck with a heavenly Diana Ross ‘doo. It also lays marbled black eggs, highly sought after by collectors and artists alike.

Looks like I’m about to run a-fowl on my word count here. I’ll just take that as my cue to…