The Family Seed is a movement, a message and a girl band that packs a punch

The Clark Fork Library is a staple of many east Bonner County kids’ childhoods, but none so much as for Vanessa Hood Birch (9) and Summer Birch (8) — step sisters whose mother, Amaryllis, works at the library. 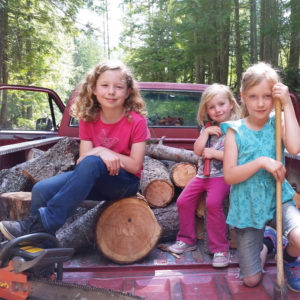 The girls of the Family Seed, from left to right: Vanessa Hood Birch, Clarissa Birch and Summer Birch. Courtesy photo.

Since meeting five years ago and becoming siblings in the time since — with little sister Clarissa (3) in tow — Vanessa and Summer have become just as much a part of the library as the books or the librarians. Regular patrons know who they are, and thanks to a venture they call the Family Seed, so do a lot of other people in the area.

“The Family Seed is just a springboard for whatever the girls want to do,” their dad, Brian, said.

Defining exactly what the Family Seed is takes a deeper understanding. On the surface, it’s a multi-faceted social media platform, podcast, community outreach and two-girl rock band. Underneath, it’s a concept driving everything Vanessa and Summer are working toward.

“The Family Seed is a family that is really grateful to have each other and that is working together to plant the seed,” Summer said.

So what, exactly, is the seed? Brian said it is whatever the girls want it to be. College, backpacking Europe, owning a horse ranch, all of the above — this family has its sights set high, starting with music.

Though the official band name is in the works, Vanessa and Summer have played a number of gigs in the region already. Summer plays the piano and Vanessa plays the drums or guitar, depending on the song. Though their sets are largely covers right now — Imagine Dragons, Fleetwood Mac, Eminem — the girls are currently perfecting a handful of original songs.

“It really just falls out of them,” Brian said. “A lot of that is thanks to learning the classics and studying other people’s work.”

Summer said songwriting comes naturally to her and her sister.

“Usually Dad tells me I can just jam for a minute, and then I find a rhythm that I like,” Summer, who got her first piano at just a year old, said. “And then I play it over and over again, and then I show it to Dad, and it becomes a song.”

It’s a knack that, combined with formal training, seems to be taking root. Both girls are taking regular lessons at the Music Conservatory of Sandpoint. Brian lauded the staff there for helping them grow as artists — namely Nathan Baker, who is working with Vanessa on guitar.

“I watched Dad play guitar for us, and I wanted to try it,” she said.

“She was a natural,” Brian said.

The Family Seed band has been gradually building their gig repertoire, and have even opened for Devon Wade, who Brian said is really supportive of the girls. Brian said the band turns down gigs unless the show’s purpose is “inspirational and putting out a good message,” and that they’re hoping to hit the road and play some shows around the northwest soon.

Their shows are high energy, with both girls belting out lyrics and Vanessa owning the drums while Summer plays the piano with visible confidence.

Summer and Vanessa agreed that some goals for their band are to open for Shook Twins from Sandpoint, and to play the Folk Life Festival in Seattle.

The girls are homeschooled, and Vanessa is an insatiable reader and Lego artist. Summer said she loves playing with her baby sister, and the whole family agreed that Clarissa is the well-loved center around which the family revolves. The girls also take Kajukenbo lessons from the Harter family in Clark Fork — a combo of karate, jujitsu, kenpo and boxing —, and they enjoy horseback riding, skateboarding, swimming and exploring in the woods.

“For me and Amaryllis it’s important that they play, and that they hang out with their little sister,” Brian said, noting that Clarissa has already started dabbling on the family’s instruments as well. “Everything we do is to get to playing” — whether with their imaginations or with their music, he said.

Catch Vanessa and Summer when they play Sandemonium this weekend, Aug. 25, at 2 p.m. at Forrest Bird Charter School.

Follow the Family Seed on Facebook, Instagram and YouTube to keep up with the girls as they learn new music and explore all of their other passions. Who knows — maybe someday we can say, “I knew them when …”