The people of Bonner County know how to celebrate independence. Here is a sampling of some of the panhandle’s Fourth of July parties in 2021. 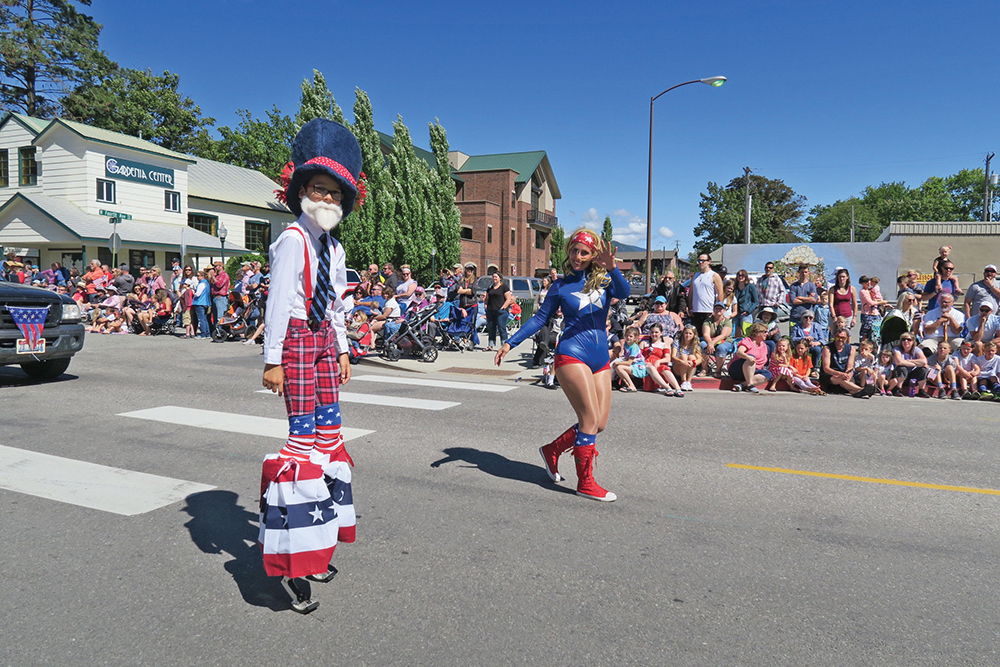 The Sandpoint Lions Club Grand Parade makes its way down Church St. in Sandpoint in 2019. Photo by Ben Olson.

The Sandpoint Lions Club will retake the helm of the Sandpoint’s annual Fourth of July celebration in 2021, which kicks off with the Children’s Parade at 9 a.m. and Grand Parade at 10 a.m. Each procession will begin at Fifth Avenue and Church Street, then head down to First Avenue and up Cedar Street. This year’s grand marshal is not a single person, but instead a tribute to essential workers from the past pandemic-stricken year.

The party will then transition to City Beach, where the Lions will pass out free ice cream starting at 1 p.m. The annual fireworks display is scheduled for after dusk, also at City Beach.

Bayview does the holiday weekend in style, launching the Bayview Chamber of Commerce’s Bayview Daze on Friday, July 2 with the Red, White and Blue Pancake Breakfast at the Bayview Community Center (20298 E. Perimeter Road) from 8-10 a.m. There will be a suggested donation at the door for this all-you-can-eat event. Saturday, July 3 will kick off with a parade. Floats will be lined up by 9 a.m. at the corner of 3rd Street and Highway 54. The parade will make its way through downtown at 11 a.m., and the rest of the day will feature vendors and various activities around town. A fireworks display will start around 10 p.m.

Clark Fork is the little town with a big heart for this holiday, boasting an annual “Old Fashioned 4th of July” full of events for people of all ages. The morning starts with the 5K Freedom Fun Run, starting at the Filling Station Youth Center (108 First Avenue) at 7 a.m. Participants are welcome to run or walk, and proceeds go to support scholarships for local students. Parade line-up begins at 8:40 a.m. on Stephen Street, and the procession will head west on Highway 200 at 9:30 a.m., turning right on Main and ending in the Clark Fork High School (502 N. Main) parking lot. In the school’s yard, the CFHS Booster Club will serve up BBQ lunches and attendees will have the chance to participate in foot races for all ages. Festivities then move to the Veterans’ Memorial Park — also known as the ball field on Ninth Avenue — for turtle races, watermelon eating contests and more. The afternoon culminates with a series of chainsaw and crosscut contests around 3 p.m., and there’s a fireworks display after dark.

Laclede’s Independence Day celebration begins at 8 a.m. on July 4 with the town’s Famous Pancake Breakfast at the Laclede Community Center (24 Moore Loop Road). The event features blueberry pancakes with Riley Creek Farm blueberries, and lasts until 10 a.m. There’s a suggested $6 donation per attendee, and kids 5 years old and under eat free. Next, anyone and everyone is invited to participate in the town’s parade, with line-up slated for 12:30 p.m. at the Laclede Community Center. The parade begins at 1 p.m., and goes down Riley Creek Road through the Riley Creek Recreation Area and back.

The Hope fireworks display is launched from a barge in Ellisport Bay on Lake Pend Oreille. Find a piece of shoreline as the sun sets on July 4 and wait for the magic to begin.

Elkins Resort on Priest Lake, located at 404 Elkins Road in Nordman, will host a fireworks display after dusk on the Fourth of July.