Phase II of the city of Sandpoint’s long-term plan for a range of downtown construction projects is nearing its kickoff, with contractor Sonray Enterprises planning to get under way with First Avenue reconstruction work on Tuesday, Sept. 3 — the day after Labor Day. 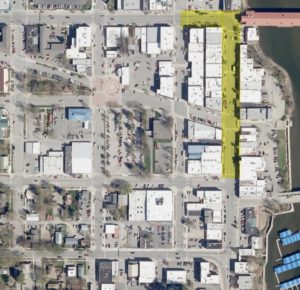 An aerial map of Sandpoint with the Phase II area highlighted in yellow.
Courtesy image.

Phase II focuses on the downtown core, rebuilding First Avenue from Church Street in the south to Cedar Street in the north and west to Second Avenue.

According to the project website, work will include a new intersection at Main Street; bulbouts at Second Avenue, Church Street and at mid-block pedestrian crossings; new stormwater swales; and trees, lighting, benches and bike racks.

Planners say the project is intended to “further downtown as a year-round destination for residents and visitors” while improving safety, accessibility and stormwater management; increasing the amount of public art and landscaping; and enhancing bicycle connectivity between downtown and residential neighborhoods.

The project is funded through the Sandpoint Urban Renewal Agency via tax increment financing and an Idaho Community Development Block Grant awarded by the Idaho Department of Commerce.