In recent summers, the debate over wake on Bonner County waterways has been nothing short of turbulent. 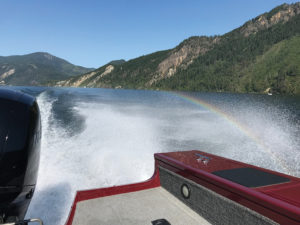 Traveling along the Green Monarch Mountains on Lake Pend Oreille in July 2018. Photo by Lyndsie Kiebert.

As boaters desire larger wakes for recreating, waterfront property owners have become more and more vocal about the damage they’re seeing to their docks and shorelines.

Through the use of heightened patrols and educational programs like the Lakes Commissions’ “Ride the Core” campaign, the county and other regulatory agencies have worked to find common ground between boaters and landowners. Those efforts continued Aug. 8 as the Bonner County Sheriff’s Office, Bonner County Parks and Waterways Department and the Idaho Department of Lands released a joint public service announcement addressing boaters who violate no-wake zone laws as well as lakefront property owners who deploy illegal buoys.

Bonner County Code imposes a no-wake zone 200 feet from the shore and structures. If caught violating the ordinance, boaters face a $150 fine for a first offense and a $300 fine for any subsequent offense.

If a property owner is concerned that the water in front of their home attracts frequent wake violations, they should contact BCSO at 208-263-8417. Marine deputies work to catalog those complaints and target trouble areas, according to Marine Division Lt. Douglas McGeachy.

If buoys could be beneficial in an area, property owners need to have them permitted through IDL. Unpermitted buoys are a navigational hazard, according to the Aug. 8 release, and people who place them could face up to $2,500 in penalties. Instead, contact the Bonner County Parks and Waterways office at 208-255-5681 and staff there will work with IDL to pursue permitting and placing buoys.

McGeachy said his philosophy when it comes to the wake issue is one of continuous education. He added that the county occasionally hosts boater safety courses and, while they’re not required, they are helpful in spreading the word about local waterways laws. Find a schedule for regional classes at parksandrecreation.idaho.gov/activities/boating.

“The more education we can do, the better,” McGeachy said.

The Bonner County Waterways Advisory Board, which has worked in the past to address the wake issue with a specific subcommittee, will meet for the first time since March on Thursday, Aug. 15 at 9 a.m. at the Bonner County Administration Building.