Even on a quiet Wednesday morning, the Kinderhaven house is buzzing with life. Evidence of the children who live and have lived in the group foster home are everywhere — in the artwork, the full bins of toys, the bike propped near the garage door.

“People walk in here, and it’s so warm,” said Kinderhaven Program Director Darcy Reimer — and she’s right, about the feeling. It is warm. It’s home.

With the area’s lack of foster homes, Kinderhaven has filled an essential gap for the youth of North Idaho for 25 years — providing a refuge for more than 2,000 children since it opened in 1996. It continues to serve as a safe shelter for kids removed from their homes for a variety of reasons. At least for now. 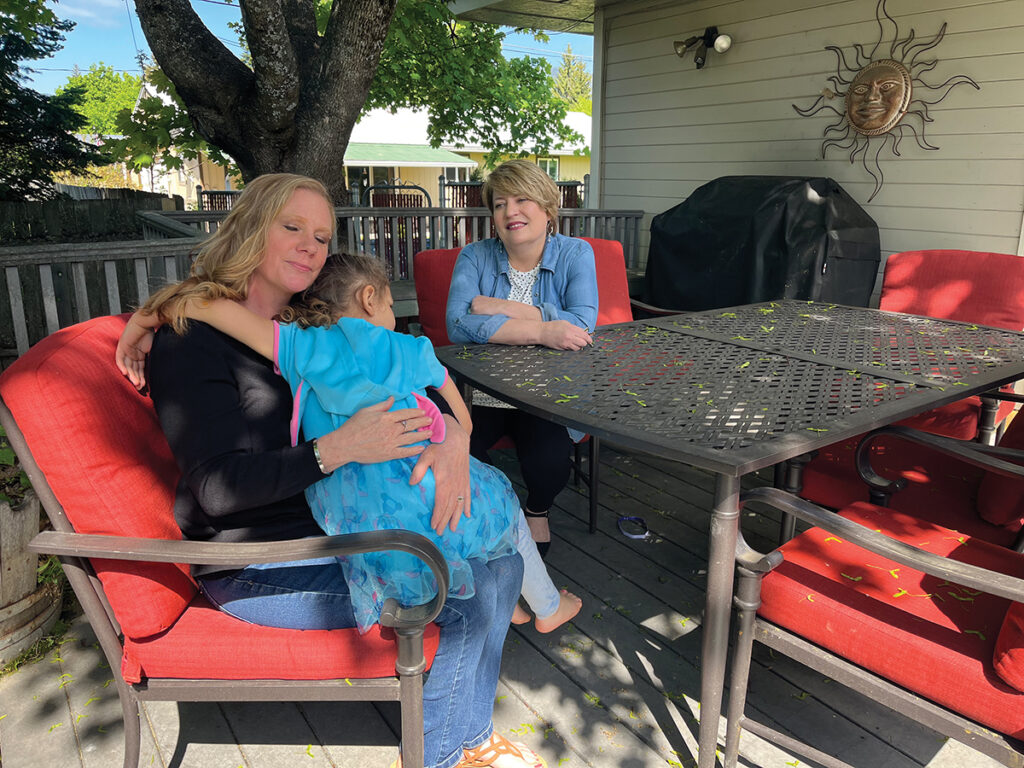 Kinderhaven Program Manager Darcy Reimer, left, and Executive Director Jennifer Plummer, right, sit on the deck of the Kinderhaven home with one of the children who currently lives there. Photo by Lyndsie Kiebert-Carey.

Kinderhaven Board President Kathy Chambers announced in late May that the home — well-furnished and bathed in soft lamplight — would soon close its doors.

“The recent enforcement of the Family First Preservation Services Act, sweeping federal legislation which eliminates the traditional use of group homes like Kinderhaven, has made it impossible for Kinderhaven to continue to serve our local children,” Chambers wrote in an announcement to donors and local media.

“Though we have collaborated with officials at the Department of Health and Welfare, our state legislators and governor’s office, we must acknowledge our inability to exist within the parameters of the new law,” she added.

According to the U.S. Department of Health and Human Services, the Family First legislation, sponsored by Florida Republican Rep. Vern Buchanan, “was enacted to turn the focus of the current child welfare system toward keeping children safely with their families to avoid the trauma that results when children are placed in out-of-home care.”

The Act, signed in 2018 but only in effect in Idaho since October 2021, is meant to provide families improved access to services in an effort to “significantly shift” how the country supports parents and children. As it relates to Kinderhaven, the National Conference of State Legislatures reports that the Family First Act “seeks to curtail the use of congregate or group care for children and instead places a new emphasis on family foster homes. 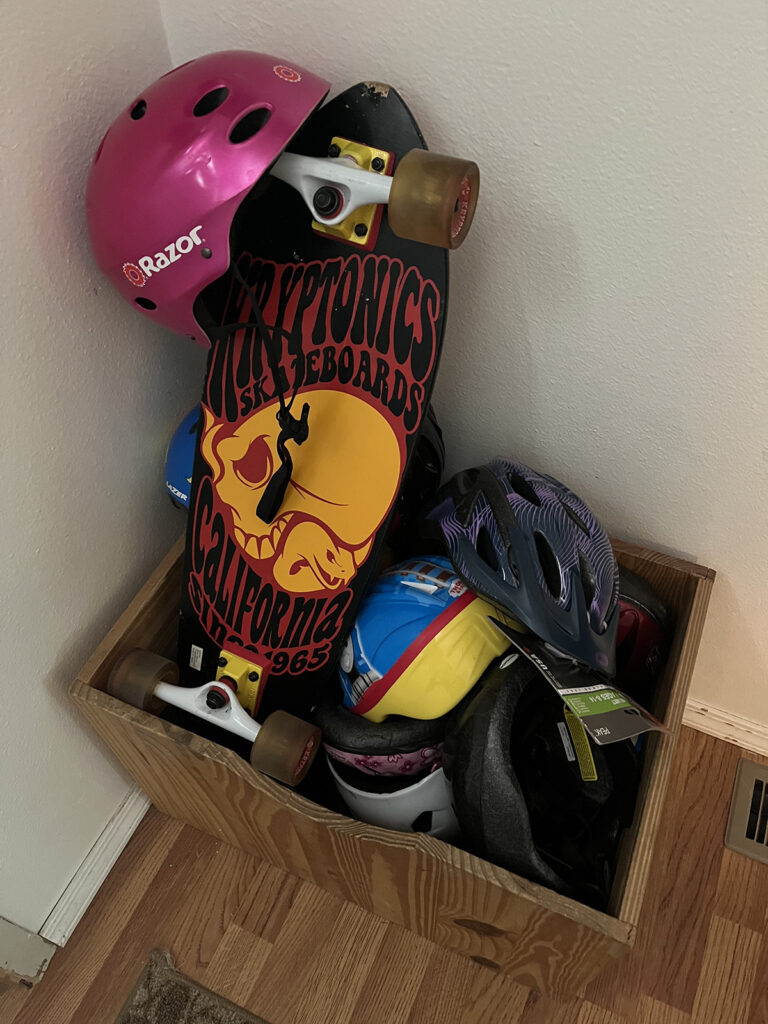 “With limited exceptions, the federal government will not reimburse states for children placed in group care settings for more than two weeks,” the NCSL continued.

Critics of the bill, while capable of identifying positive impacts it might make, argue that it was rushed and failed to take into account the serious shortage of foster homes nationwide.

“On paper, it looks good to say that you’re keeping families together, that you’re keeping children at home with mom and dad,” said Kinderhaven Executive Director Jennifer Plummer. “That’s what we all want. We want kids to stay in their homes with their parents — that just can’t always happen. I think the legislation didn’t necessarily realize the depth of the crisis.”

Child welfare experts described that crisis as about 400,000 children in foster care in the United States in 2018, when the Act passed.

“Nevertheless, the authors of the Family First Act made sure to specify that: ‘A shortage or lack of foster family homes shall not be an acceptable reason for determining that the needs of the child cannot be met in a foster family home,’” wrote child advocate and former District of Columbia social worker Marie Cohen on her blog, Child Welfare Monitor.

“One wonders where these children should go but perhaps the sponsors don’t care,” Cohen added. “It is the states and counties that will find a place for the children, even if the federal government does not pay a share.”

While group homes such as Kinderhaven are no longer allowed to exist in the way that they have, Plummer said her organization considered making the shift to being a “qualified residential treatment program” in order to comply under the new law. However, that would have meant significant changes to operations and required Kinderhaven to open its doors to children across the state with serious emotional and behavioral needs.

“That wasn’t our mission. That was never what we were meant to be,” Plummer said. “We were a local home for local children.”

Reimer has been a part of those children’s lives for 13 years. Many of them are now successful and thriving, Reimer said, because they were kept safe when their home life wasn’t what it should have been.

“We wrap our arms around these children,” she said. “We get them into the doctor and the therapist and the dentist and into school. … We watch them thrive.” 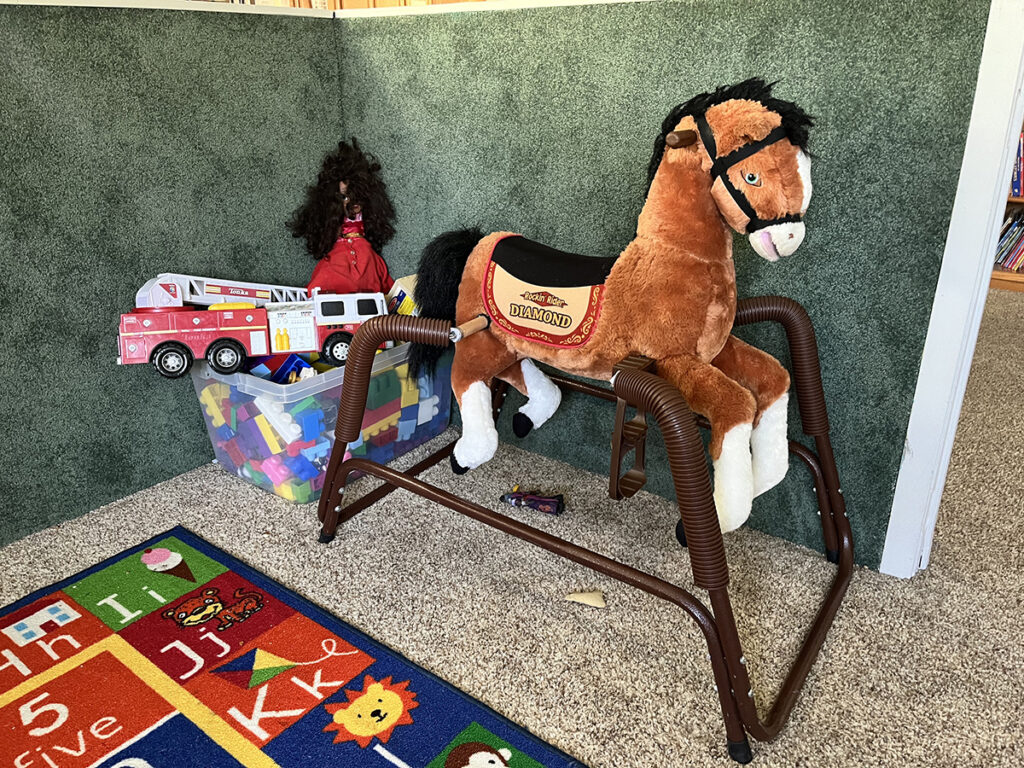 A rocking horse and other toys inside the living area of Kinderhaven in Sandpoint. Photo by Lyndsie Kiebert-Carey.

Plummer emphasized the unfailing support from donors over the years who made Kinderhaven possible.

“The furniture we’re sitting on, quite literally, has been donated to us by our community,” she said. “We have just been so careful to be really good stewards of the intentions of our donors and our supporters.”

Plummer also lauded Kinderhaven’s “incredible” board and staff, and said that the closing of the group home does not mark the end for Kinderhaven, which will continue to support local families. What shape this new era will take is yet to be determined.

“This has been a profound labor of love for over 25 years,” she said. “It saddens us deeply that it’s come to this, but again, we have to look to the future. We want to continue to protect children and enrich their lives, and we are working diligently with our community partners to figure out how we can best continue to protect and enrich the lives of children in our community.”

“We will be keeping the community apprised of everything that we’re working on, moving forward,” she added.

With Kinderhaven closing and Bonner County already lacking in foster homes, Plummer and Reimer hope that those willing to open their homes to local children might consider making the leap now.

“We would encourage people to look into that if they’ve thought about it,” Reimer said.

To learn more about Kinderhaven’s mission and to read Chambers’ announcement in its entirety, visit kinderhavensandpoint.com.