Peace on earth… or at least in Sandpoint:

For both Sandpoint and the world as a whole, 2015 was a year of upheaval, unrest and needless death. But if there’s one thing the holiday season is good for, it’s instilling a sense of comfort even in the worst of times. That optimism must be catching, because the past couple months have seen locals taking action to spread good will and kindness to those who need it most. 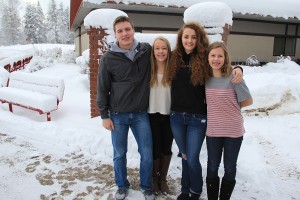 Spirits were low for the first semester of Sandpoint High School this year, and for good reason. A rash of recent suicides cut short three young lives and rocked the tight-knit student body to its core. By the third incident, sophomore Calli Laybourne, senior Troy Nutt, freshman Kassidy Walker and freshman Ava Blaser had enough—enough of the thoughtless teenage cruelty, enough of the isolating cliques and social groups, enough of the casual disinterest that trapped struggling students in depression. A persistent thought caught in their brains: What if one person took 10 seconds out of their day to show one of those students kindness? It might have made the difference between life and fatal despair.

“If you took 10 seconds to be genuinely kind to someone, it can change their life,” Calli said. “But also in 10 seconds, you can bring someone down to a low point.”

The kicker came when Calli found classmates sharing polls on Twitter comparing students. Who is the prettiest? Who is the most athletic? Who is the most annoying? Her thoughts immediately went to the students being unfavorably compared. How would they feel if they saw their peers voting them down? Together with Troy, Kassidy and Ava, Calli founded the Ten Seconds of Kindness movement, a homegrown initiative encouraging everyone to make time in their day for random acts of good will.

Ten Seconds of Kindness started out small. Troy, Kassidy, Ava and Calli handed out candy, played music and looked for ways to add positivity to their classmates’ lives.  Their social media pages shared content with a similarly hopeful messages. They recorded a video that played with the school’s morning announcements.

“We had a good start with a video we had in the morning announcements,” said Troy. “It got people’s attention with what we’re trying to do.”

They may have been little gestures, but the effect was enormous. Students are feeling safe enough to share their troubles with their friends, teachers or counselors. Some opened up about their depression or suicidal thoughts. Another revealed that he’d been cutting himself and is now getting help.

“I’ve already noticed a change in the atmosphere,” Ava said. “You can tell from the chatter around. It has a much better vibe coming from it.”

The four students figured Sandpoint High School was ready for some positive action, but they never imagined how quickly it would take off. Within days, Ten Seconds of Kindness’ Facebook page garnered more than 1,000 likes. As of this week, it stands at more than 1,300 votes of support. Schools around the Inland Northwest have reached out to the Kindness leaders, hoping they can speak or help initiate similar movements in other towns. Indeed, the four students believe Ten Seconds of Kindness could spread well beyond Sandpoint. With enough momentum, chapters could spring up all over the country.

For now, however, the Kindness leadership is taking it step-by-step. They plan to start a blog in the near-future and are talking with local organization Selkirk Outdoor Leadership and Education about a potential collaboration. For their present, however, their focus is on their original calling: SHS students who feel isolated in their depression.

“We’re going to try to save them all,” said Kassidy.

For a season all about peace on Earth, a quick look at the state of global and national affairs is disquieting. Greater Sandpoint Chamber of Commerce President Kate McAlister was discouraged by the international violence pervading the headlines, and even more so when some political figures recommended identifying and tracking people based on their religion.

“How could someone say things like this?” McAlister said. “Even more disturbing, how could others agree with what was being said?”

However, McAlister took heart from the words she believes are attributed to Mother Teresa: “If you want peace, you must be peace.” The wisdom formed the core of Nana Kate’s Great Peace Project, a simple effort to galvanize around the better angels of our nature. The effort is encapsulated by the famous three-pronged peace symbol popularized in the late 1950s.

“I thought about my grandchildren, and all I could think was I wanted peace for them and for all of us,” McAlister said. “I gave myself a lecture about it didn’t have to be something big, just do something.”

The Peace Project encourages participants to be peace, using the symbol as a reminder. By displaying the visual, McAlister hopes people will remember to embody calm and kindness rather than hate. She also encourages people to create their own artwork, crafts and photos around the motif, then post them on the group’s Facebook page. Participants have already come up with some creative spins on the idea, but McAlister hopes to see more. She also could use a Facebook guru who knows the ins and outs of managing a group page.

If nothing else, however, she hopes the project will, in its own small way, calm the turbulence in the latest international and political news. After all, there’s no denying the world could use a little peace on earth and good will toward men.

“Be peaceful this holiday and every day.  It will do all of us a world of good,” McAlister said. “Be peace.”